OK... so this problem isn't really specific... it's more of a conceptual puzzle. I've recently started using integrals while solving problems in physics (specifically Newtonian Mechanics and other similar problems), and quite often it's painfully hard to "compose" these integrals... so I figure, I'm doing something wrong or some knowledge is missing. Namely, when I should have an integral, sometimes I'm missing the variable under the integrand with respect to which I am integrating, and sometimes it's naturally there:

2nd Example - I'm doing something wrong
Let's say we have a cylinder, whose base diameter is 2R and height L, dipped in water, so that it's center of mass is under the water level by h. I want to calculate the force acting on one half of the cylinder via the pressure of the surrounding medium. I've done my best to give a graphical representation below, from a birds eye view: 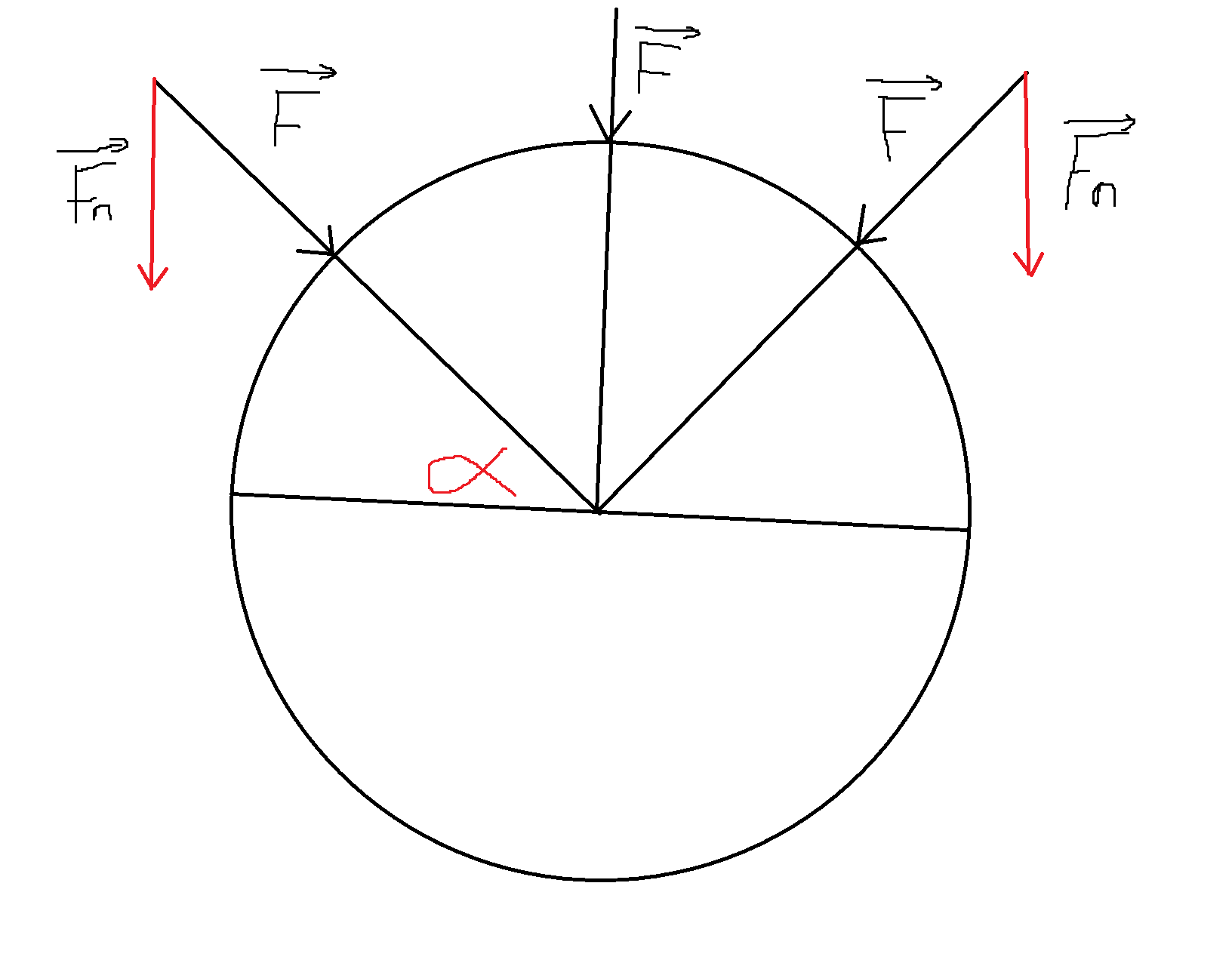 So, as we could see the horizontal components cancel out due to symmetry, and all that remains are the normal components F_n. We have the equation: $$ F_n = F \sin \alpha = p_{\text{avg}} S \sin \alpha $$ where $\alpha$ goes from $0$ to $\pi$ (we can easily find $p_{\text{avg}}$ - the average pressure of the water). So trying to integrate this would yield: $$ R = \int dF_n = \int_0^\pi p_{\text{avg}} dS \sin \alpha = p_{\text{avg}}\int_0^\pi dS \sin \alpha $$ I would need to integrate with respect to $\alpha$. You could see that i added the limits, so the reader would have sense of what I'm trying to do... but from here I can't go anywhere. I am missing the variable in respect to which I want to integrate ($d\alpha$), and I don't know where to find it, whereas in the previous example, it just came naturally. Also, doing this by sums I can solve the problem. I guess that is because sums don't need the variable under the integrand with respect to which I am integrating.

Can anybody tell me what am I doing wrong? Is there a "general rule" to avoid these types of can't-do-it-with-integrals situations? Really all it is, is that I fail to write these integrals, respecting the convention, and I feel like I'm going to need them.

For this sort of problem it really helps to go back to the Riemann sum. You don't even need to write it down per se; you just need to think about what your $\delta x$ is in the Riemann sum.

So, in this case you're trying to find a "sum of forces" or we might say a "net" force. To find this, it helps a little to think about momentum conservation/Newton's Third law: we break this thing up into little masses of size $\delta m$, then each of those gets accelerated a little by your force field; we sum all of these little forces up into a "net force"; we are not troubled by the internal forces between masses because they all cancel out due to the third law, except possibly at the very boundary.

Setting up our Riemann sum we have $$\bar F_y = \sum \vec a\cdot\hat y~\delta m.$$ Now assuming a uniform mass distribution across the outer circle, we would say that $$\delta m = \frac{M}{2\pi R} ~ (R ~ \delta \alpha)$$On the flip-side you seem to be doing something a little different, with S as some sort of surface area for your cylinder. In that case, when you divide the cylinder into little slivers of angle $\delta\alpha$ you have $\delta S = R ~L~\delta\alpha$ since $R~\delta\alpha$ is the arc-length of that change in angle when the angle is measured in radians, so $R~L~\delta\alpha$ is the surface area available at $\alpha$.

A similar effect happens in electromagnetism: usually you want a force on a charged object, so you have to divide it into little charges $\delta q$ and then sum up all of the little forces on the little charges.

Can you see? In each case we break the situation apart into something little (masses, areas, charges) which we can solve easily, getting a bunch of little forces. The "something little" is the $\delta x$ in our Riemann sum $\int f(x)~dx \approx \sum_i f(x_i)~\delta x_i.$ When we can find that there is a little force $f(x_i)~\delta x_i$ we can sum it up using a Riemann sum and immediately turn that into a corresponding integral.

Well in this case, you could consider a really thin ring of elemental thickness say t,

then proceed to form the integral as you have done to that point... Now, you might write dS as tdx , dx being an elemental strip along the circumference of the ring which subtends an angle d(theta) at the center.

So you may now rewrite dS as t* R *d(theta) , and proceed with your integration.

Not the answer you're looking for? Browse other questions tagged classical-mechanics integration calculus or ask your own question.

4
Integral in Peskin and Schroeder
6
Understanding the differential in integrals
0
Why do I have an extra factor of 3 for self-gravity?
8
What does it mean to integrate with respect to mass?
1
Integral Issue for Inertia of Disk