High school physics student here, so please bear with me for a moment.

At first I thought they oscillated in sort of a "spring" shape, like a three-dimensional sine wave, but I later found that that's another kind of polarized light called circular polarization. What I imagine now is the wave going all over the place while retaining the same amplitude and period, like a ball bouncing along in an infinitely long cylinder, but of course I have no idea if that's actually the case. 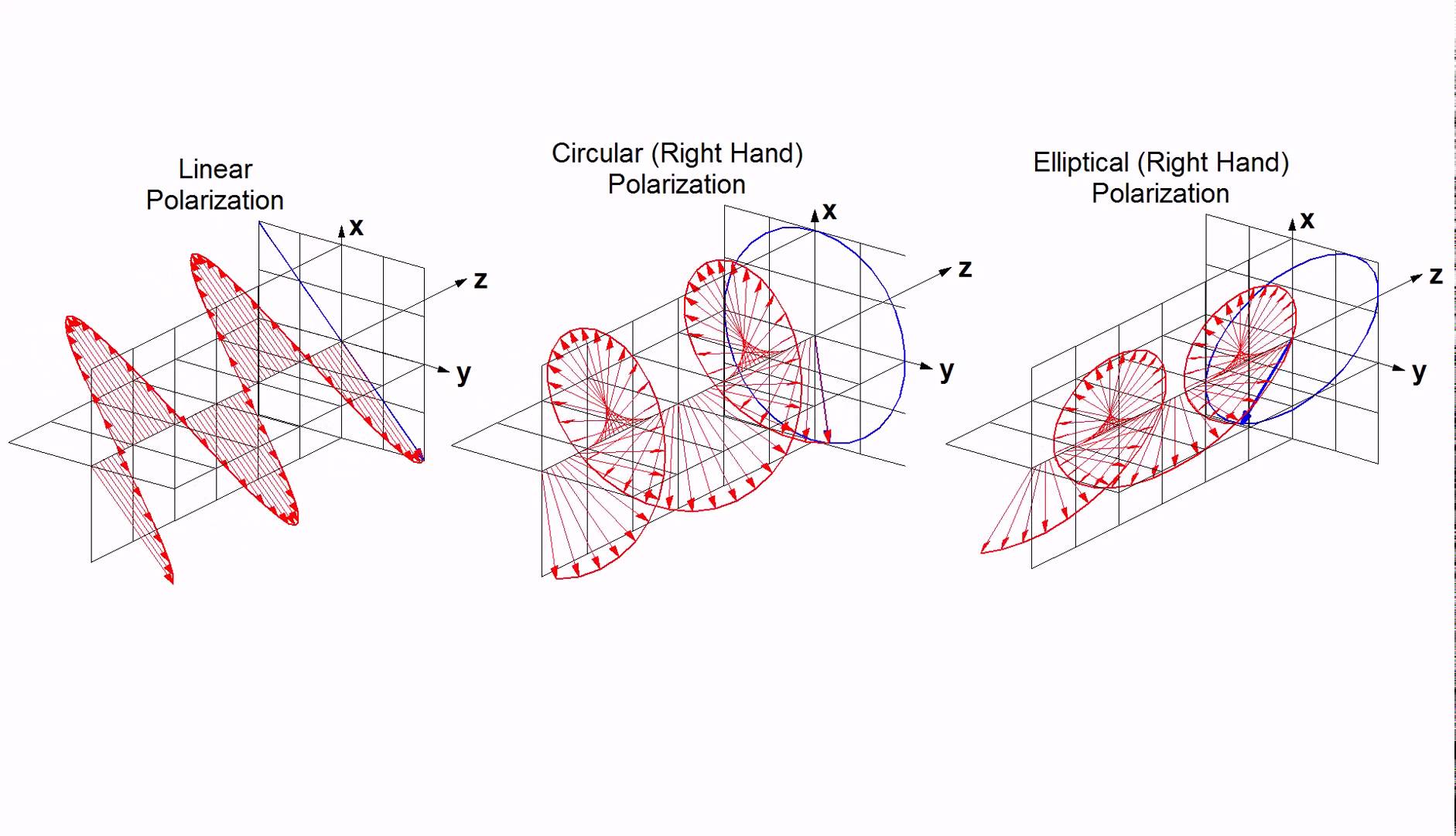 This is possibly not a full answer, but the Wikipedia article Polarisation of Light below seems to suggest to me that, because of the chance of partially polarised light occurring, there may not be a well defined answer to your question:

because the mathematical appearance of the light wave oscillations may depend on the degree of partial polarisation, which could be potentially infinite for circular polarisation.

Most common sources of visible light, including thermal (black body) radiation and fluorescence (but not lasers), produce light described as "incoherent". Radiation is produced independently by a large number of atoms or molecules whose emissions are uncorrelated and generally of random polarizations. In this case the light is said to be unpolarized. This term is somewhat inexact, since at any instant of time at one location there is a definite direction to the electric and magnetic fields, however it implies that the polarization changes so quickly in time that it will not be measured or relevant to the outcome of an experiment. A so-called depolarizer acts on a polarized beam to create one which is actually fully polarized at every point, but in which the polarization varies so rapidly across the beam that it may be ignored in the intended applications.

One has explored radio waves experimentally. It was found, that outside the emitter (antenna rod) exist both a swelling magnetic field and a swelling electric field. The electric field was parallel to the rod, the magnetic field perpendicular to the rod. This radio waves are electromagnetic radiation, but they are a special case of EM radiation. The most usual case is unpolarized emission of EM radiation, like from an electric bulb or any body with temperature above zero Kelvin (and that are all bodies (expect black holes)). But radio waves with their periodical and polarized emission of photons are excellent good for understanding what is EM radiation.

That happens in the antenna rod? An AC generator ACCELERATES electrons in the rod periodical in the direction to the one and to the over side of the rod ends. Acceleration of electrons is accompanied by the emission of photons. So what one could explore in radio waves is the common state of the emitted together photons. If one is not sure that EM radiation is always made by photons, control and understand, how EM radiation arises. It has always to do with the acceleration (including deflection). Now imagine indivisible particles, that are form the radio wave. This particle could be like a bulb, expanding some times to the magnetic field and some times to the electric field. This repeats periodical and form he radio wave.

Not to go astray, at the moment, the AC generator switches his poles, the electrons are in rest and no photons were emitted. In the middle between two switches the most number of photons is emitted. So the single photon does not vanish in some points of its travel through space.

You know what ocean waves look like. Imagine you're in a gin-clear ocean, and there is no surface. Now imagine an ocean wave passes you by. A light wave looks like that. By which I mean it doesn't look like anything.

I know that light waves oscillate, but I don't know how.

They don't really oscillate. You must have been down to the beach and looked at the waves. They move along smoothly. They aren't bouncing up and down.

In textbooks and diagrams they're portrayed as wavy lines traveling through space, but I don't think most light waves oscillate in perfect sine waves like that (unless they're polarized).

Light waves are polarized. They're transverse waves. And like Jac said, they can be plane polarized, circularly polarized, or elliptically polarized. But they're still polarized. Ocean waves are polarized too. And they're portrayed as wavy lines. But again, note that they move smoothly, they don't actually oscillate. If you're in the water you would go up and down and around, like the red test particles. You would oscillate, but the wave itself doesn't.

Note that the wave isn't just some hump at the water surface. It goes down deep. The wave motion gradually diminishes such that at some depth you can't detect it. In this respect the wave takes "many paths" when it goes from A to B.

At first I thought they oscillated in sort of a "spring" shape, like a three-dimensional sine wave, but I later found that that's another kind of polarized light called circular polarization.

Think of that as a combination of linear polarization this ↑ way and this → way.

What I imagine now is the wave going all over the place while retaining the same amplitude and period, like a ball bouncing along in an infinitely long cylinder, but of course I have no idea if that's actually the case.

Get yourself a rubber mat, and shake it. Watch that transverse wave propagate down it. It isn't much like a ball bouncing.

Like an ocean wave, in a gin-clear ocean, where there is no surface!

Not the answer you're looking for? Browse other questions tagged visible-light waves or ask your own question.

5
What does a light wave look like (3d model)
8
Is light amplitude spatial?
9
How can radiation be a transverse wave? Does light really resemble a rope? How can a 3D field be a medium for non-spatial 1D waves? Need mental model
4
Do Photons Move in a Wave Like Pattern?

14
What is light, and how can it travel in a vacuum forever in all directions at once without a medium?
5
What is the physical structure of light?
8
Is light amplitude spatial?
9
How can radiation be a transverse wave? Does light really resemble a rope? How can a 3D field be a medium for non-spatial 1D waves? Need mental model
0
Internal speed of light
6
Can transverse sound waves be polarized?
5
Circular polarizers change the color of linearly polarized light
0
On Superposition In Diffraction
2
Why is polarised light so bright? if polarizing lens are made to dim the light
3
Can a wave be changed by another wave?