Theoretically, if I were to launch something faster than the speed of sound in water (around 5 times that of air), what would happen?

The reason that the speed of sound is a well-defined quantity is that, for small pertubations, the equations which govern the fluid dynamics can be linearised. In that linearised form, the solution boils down to a simple wave ansatz with linear dispersion relation, i.e. constant velocity.
Those are the sound waves.

It so happens that in air, this linear solution holds up pretty well even for rather big pertubations. Only, when something moves faster than the speed of sound, the linear wave mode obviously can't be used anymore to transport away energy, hence any disturbance (which is inevitable when something's trying to move through the air) is “trapped”. The pertubation gets ever stronger, until the dynamics are completely nonlinear and you get a shock wave.
This is the reason the sound barrier is such a crucial limit for aircraft.

In incompressible fluids like water, this doesn't necessarily work out the same way. In water, the dynamics tend to be far more violent, even well below the speed of sound. In particular, you will readily end up with cavitation bubbles. As already said by Acid Jazz, this allows for a rather remarkable mode of underwater motion, which is completely unlike anything you get in air.

tl;dr, the sound barrier isn't really relevant under water, because stranger effects turn up before you ever get close to it.

However, it would still be relevant if you could manage to keep the pressure pertubations small enough even close to the speed of sound. Actually, this is relevant for any supersonic motion under water, if you look at it on a big enough scale. For instance, an asteroid impact into the ocean does no doubt cause a sonic cone quite analogous to the one generated by supersonic aircraft.

Speed of sound in water at 20 degrees Celsius is 1482 m/s., (2881 knots), just for comparison to current claimed achievable speeds.

Small related fact: The pistol shrimp can create sonoluminescent cavitation bubbles that reach up to 5,000 K (4,700 °C) which are as loud as 218 decibels, breaking the sound barrier in water. Says Wikipedia

Water, at say ocean temperatures, is pretty much incompressible, so it's a tall order. The moving object would be moving through a cloud of steam , essentially, rather than touching the water directly.

In designing the profile and shape of the object, you would need to consider the most efficient method of turning liquid water into steam.

If you could do it, (comparable to moving through a block of solid oak wood, or something even denser) the water would turn to steam, caused by boiling, at the leading edge of the moving object. As the steam bubble expands, the object begins moving through the void created by the expanding vapor.

The moving object is then surrounded by the bubble of steam created at it's leading edge since it is moving through the expanding bubble faster than the surrounding water can cool the steam and return it to a liquid state. That allows the moving object to travel, in effect, through steam, rather than liquid water.

See Carl's comment below on possible problems achieving this effect. 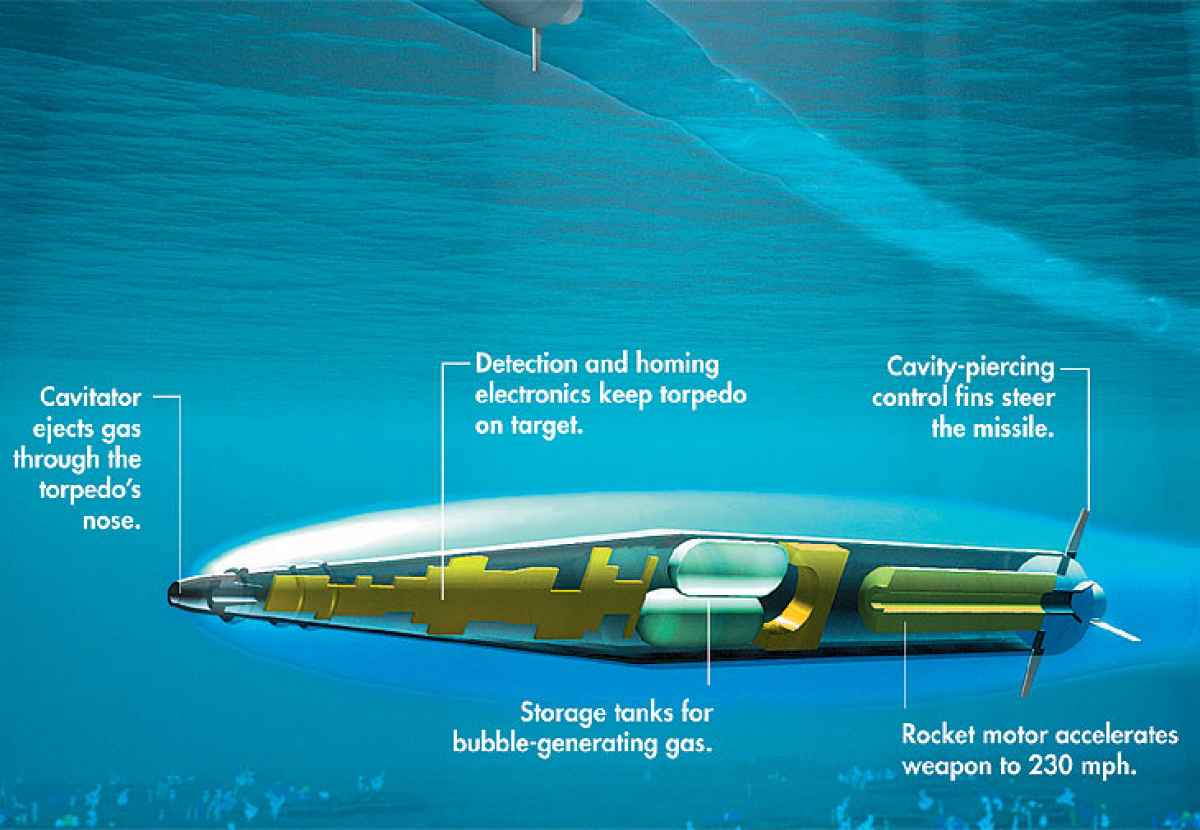 Several challenges remain for the supercavitating torpedo, including how it will be steered underwater. Water-tunnel tests have already proven that speed can be achieved: In 1997, the Navy tested a supercavitating projectile (illustration above) that reached 5,082 feet per second, becoming the first underwater projectile to exceed Mach 1.

Oddly enough, supercavitation can help increase max speed. According to the not-necessarily-correct PopSci, the Navy has achieved Mach 1:

supercavitating torpedo . A link in wikipedia claims the Germans have achieved 800 km/h .

Other than the Soviet Shkval, I can't find any updates on such torpedos, so either the Navy programs have gone deep black or they've given up.

Not the answer you're looking for? Browse other questions tagged fluid-dynamics waves acoustics continuum-mechanics shock-waves or ask your own question.

7
What would it look like if we broke the speed of sound underwater?

1
speed of sound relative to density of medium through which sound travels
3
Speed of Sound/Push in Supersonic Flight
1
How does underwater sound sound?
29
How can shock waves travel faster than sound?
6
Liquid wave faster than sound in the above gas: possibility implications
9
What is the loudest possible sound?
2
Sound tavels faster where?
1
Why does sound travel faster in steel than in water?