How does a planet's size really affect its surface gravity?

If we located an exoplanet whose diameter was $x$ times that of the Earth's in size, and which for simplicity appeared to have an identical composition to that of Earth, then its mass might be taken as $x^3$ times that of Earth, since mass equals density times volume, and volume is proportional to the cube of radius (or diameter). Since gravity falls with the square of the distance, at the surface of the world, one would be $x$ times further from the center of mass than they would be on the surface of Earth, so dividing the $x^3$ by $x^2$, gives us $x$ times earth gravity at the surface of the alien world. Thus, all other things being equal, gravity seems to scale linearly with the diameter of the planet.

Except I was considering the possibility that everything else can never really be equal when you have a planet of a different size.

If the planet was actually more massive than Earth, for instance, even if it had otherwise identical composition, then it would seem to me that its composition should also be more compressed by the planet's gravitational pull... more mass would fit into a smaller volume than on Earth, and even if it had an identical composition, the effective density of the planet should thus be greater than Earth's. This suggests a definite non-linear relationship between the cube of the planet's diameter and its mass, and in turn gravitational pull at the surface of the world, as the above calculation shows, even if you assume an otherwise completely identical planetary composition. I have absolutely no idea how to even begin to calculate what that relationship would be, however... and that is largely the point of this question.

So, was the initial calculation above correct in that the surface gravity would actually scale linearly (or very nearly linearly) with the diameter of the world, as long as the world's composition was generally the same as that of earth, or could such effective compression caused by gravitational pull significantly affect how much mass of a given material that could fit within a certain volume, and so affect the overall mass of the planet and thus the surface gravitational pull, and if so, how could it be calculated?

As stated above, your linear calculation is correct and your assumption on compression is correct too. I can try to give a rough answer to the shrinkage. Lets start by looking at pressure.

In simple terms, the pressure is the weight above you, over the surface area, which would be linear, but it's weight, not mass and as the gravity doubles, the weight doubles, so, for pressure, you get the square of the effect than you get for gravity. So, doubling the planet's diameter and keeping everything else the same, the pressure goes up 4 times, before we factor in shrinkage.

Heat is also a factor. Heating a metal expands it, not a great deal, but some but lets ignore that for now. Also, different elements and alloys will have different densities and different resistance to pressure. I suspect, pressure is more important than heat, unless it's a gas giant planet and close to it's sun, creating what's known as a "puffy Jupiter", but I think for a rough calculation you can ignore heat. For more accuracy, probably not.

Now, unlike Gas, which has a pressure that's basically molecules bouncing off each other, solids and liquids resist pressure by the electromagnetic force which is why most of them are largely incompressible, but they can still compress. We know for a fact that white dwarf stars for example. The pressure is sufficient, that once the fusion process stops creating heat inside the star, a sun mass star shrinks to about the size of the earth, and a density about a million times as dense. A curious thing about White dwarf stars and Neutron stars is, that as they add matter, they shrink.

This can happen with large planets too. Jupiter is kind of close to the maximum size that a planet can get. A gas giant with 10 times Jupiter's mass wouldn't be much bigger than Jupiter, it might even be a little smaller.

Now, lets look at the density of the core of the earth:

and Iron has a density of 7.87 g/cm^3 and Nickel about 8.9 and there are trace amounts of heavier elements and the core is actually an alloy so it's density would be slightly different, probably slightly denser, but doubtfully all the way up to 13 g/cm^3, so, it's not unreasonable to say that the Earth's pressure increases the density of the Core, something like 30%-40% as a ballpark estimate. Lets go with 35% increased density in the solid core due to pressure as a ballpark estimate. 35% increased density means about 91% of the diameter, but the solid core is only 1% of the volume of the earth, so that's a small factor.

The liquid outer core is much larger, and it (same link above) has an average density of 9.9 and 12.2, so, I could run more estimates, but it would get very rough. It's safe to say that there is some compression of the Earth going on, how much? Likely less than the 91% of uncompressed diameter at the core, but there might be - and this is a very ballpark guess maybe, 3% - 5% shrinkage of the Earth's diameter due to it's mass and composition, or, perhaps more useful, 95%-97% of it's uncompressed diameter.

This article kind of backs that estimate up. http://www.universetoday.com/26771/density-of-the-earth/

So, rough estimates can be made here as well, if we guess the uncompressed density of Mercury and Venus and compare them to earth, but I'm comfortable with the 3% - 5% shrinkage estimate (95%-97%)

If we use Coulomb's law

as the distance between the electron orbitals and the positive atomic nucleus is decreased the resistance increases by the square of the reduced radius. In effect, as pressure goes up 4 times, (and diameter goes up twice), the inverse of the shrinkage also doubles, so there is a corresponding relation between the diameter and the inverse of the shrinkage.

So, 1 earth mass, and lets use 96% of natural diameter

and a million earths, 100 earth diameters, 10,000 earth pressures, we might expect 400% compression or 20% the uncompressed size. This, is, of-course way way way off, also at 20% size the weight would grow exponentially, so a 2nd round of calculation would be needed as you get too large, But for a very rough estimate, if you set a compression percentage (1 earth, 4% or 5% or whatever you like) each doubling of the diameter should roughly double the compression and you can then go back and re-calculate the gravity using a few percentage points of increased compression.

It's worth noting that too much bigger than 5 or 10 earths and the planet would collect enough hydrogen to effectively be a gas giant, not a giant earth - that's mentioned in the article linked above.

Hope that's not too rough. If anyone wants to correct, feel free.

Your analysis is too simplistic. Let's start by looking at what the answer is. The plot below shows surface gravity vs radius for those (transiting) exoplanets that also have an estimated mass from spectroscopy. Some of the lower mass objects have large error bars on their mass and consequently large error bars on the gravity.

There appears to be a bi-modal behaviour. Planets of size less than 0.5 Jupiter radii (or about 5 Earth radii) have a surface gravity that could be independent of or slightly decreasing with increasing radius. On the other hand, there is a broad spread of gravities for larger planets at roughly the same radius. 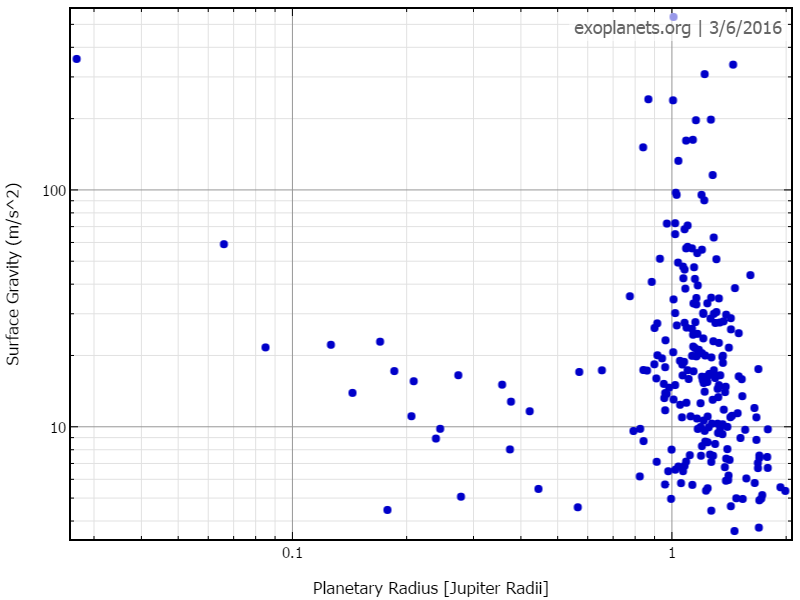 I'll deal with the easier latter relationship to begin with. The objects with $R>0.5R_J$ are likely to be gas giants. The gas giants are supported by electron degeneracy pressure (with some corrections). The radius of an object supported by ideal electron degeneracy pressure obeys $R \propto M^{-1/3}$ and the radius is not very composition dependent. Using this, we see that gravity $g \propto M/R^2 = R^{-5}$. In fact this is not quite right. There are a number of corrections to be made to ideal electron degeneracy pressure. For a start, the gas is not completely degenerate. Second there are significant corrections associated with the charged nature of the particles (Coulomb corrections, Thomas-Fermi corrections) and these mean that actually the radius of gas giants (and even brown dwarfs) is almost independent of their mass. This leads directly to the observed fact that $g \propto M$, and because the radius at a given mass is nearly constant, that means $g$ has an extremely steep dependence on radius, which is masked by uncertainties in $R$ and by differences in composition and insolation (irradiation) by the parent star. The obvious correlation with mass for the giant planets is shown below. 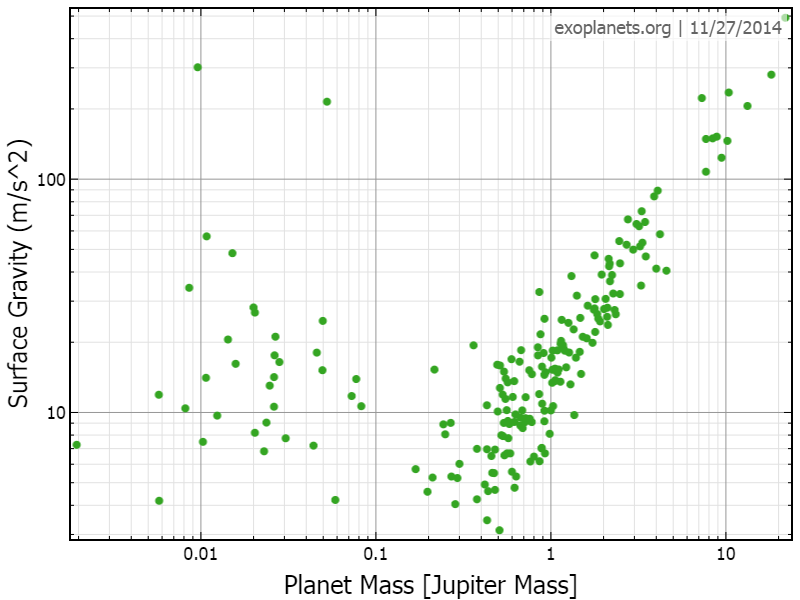 The planets smaller than 0.1 Jupiter masses may have a rocky or icy composition. The equations of state of these objects are much more complex and dependent on the exact composition. The plot below shows some theoretical models with data overlaid for a radius versus mass relation for low mass planets. The coloured lines show models with different compositions. The dashed lines show lines of constant density. Note that the models cross the dashed lines, so that the assumption of constant density is incorrect - the density of water planets or those of rocky composition increases with mass (the same is true but more so for the giant planets). The density must increase because the internal pressure depends mostly on the density (and very little on temperature) and more massive planets have a greater weight to support. This leads to an increase in the gravity with mass (and radius). Taking the "Earth" model we see that $M/R^2$ increases by a factor of 4 between 1 and 2.2 Earth radii (i.e. roughly $g \propto R^{2}$).

In practice, we see from the data that the planets measured so far in this mass range have diverse radii at the same mass and likely do not share similar compositions. This diversity masks any empirical trend with radius we might look for. 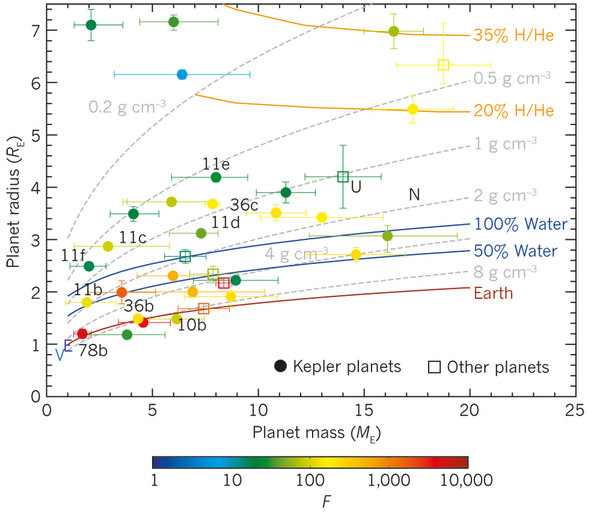 Not the answer you're looking for? Browse other questions tagged newtonian-gravity exoplanets or ask your own question.

2
Does the gravitational force of a massive, spherical body draw only towards its center of gravity, and to no other area?
0
Using normal rules of gravity, How would gravity work on a flat "world"?
3
Gravitational Strength on a theoretical flat planet
7
How does gravity affect the wavefunction of a particle?
1
Is gravity really a force that occurs between composite "objects," or is it individual atoms?
0
Doubt when calculating the gravity force excerted by a planet to an object on its surface