How do we know what the Milky Way looks like?

There is no way (with the current technology) that we could send a probe outside the Milky Way in a reasonable amount of time. So, how do we know what the Milky Way looks like, and what factors do scientists consider to generate an image of it?

There's an ingenious way to do this! Hydrogen emits radiation with a wavelength of about 21 centimeters, and this radiation is easy to detect. And where there's hydrogen, there are stars.

Unfortunately, this isn't enough; if you just look straight at the center of the Milky Way, you'll see plenty of 21 cm radiation, but you won't know how far away it's coming from.

The trick is to use the Doppler shift. If the emitting atoms are moving away from us, the wavelength will be slightly larger than 21 cm. If they're moving towards us, slightly less. So instead of just getting radiation at 21 cm, you get a distribution of wavelengths around 21 cm.

We know how fast stars orbit the center given their orbit radius, from galaxy rotation curves. And if we know how fast a star is moving relative to us, we can figure out how much their 21 cm line is shifted.

As a result, when you point your telescope at some direction in the Milky Way, and see a bump near 21 cm, you can do some trigonometry and figure out that it came from stars, say, 1000 light years away in that direction. You can repeat this process for many different directions, eventually arriving at a full map of the spiral arms. It looks like this. 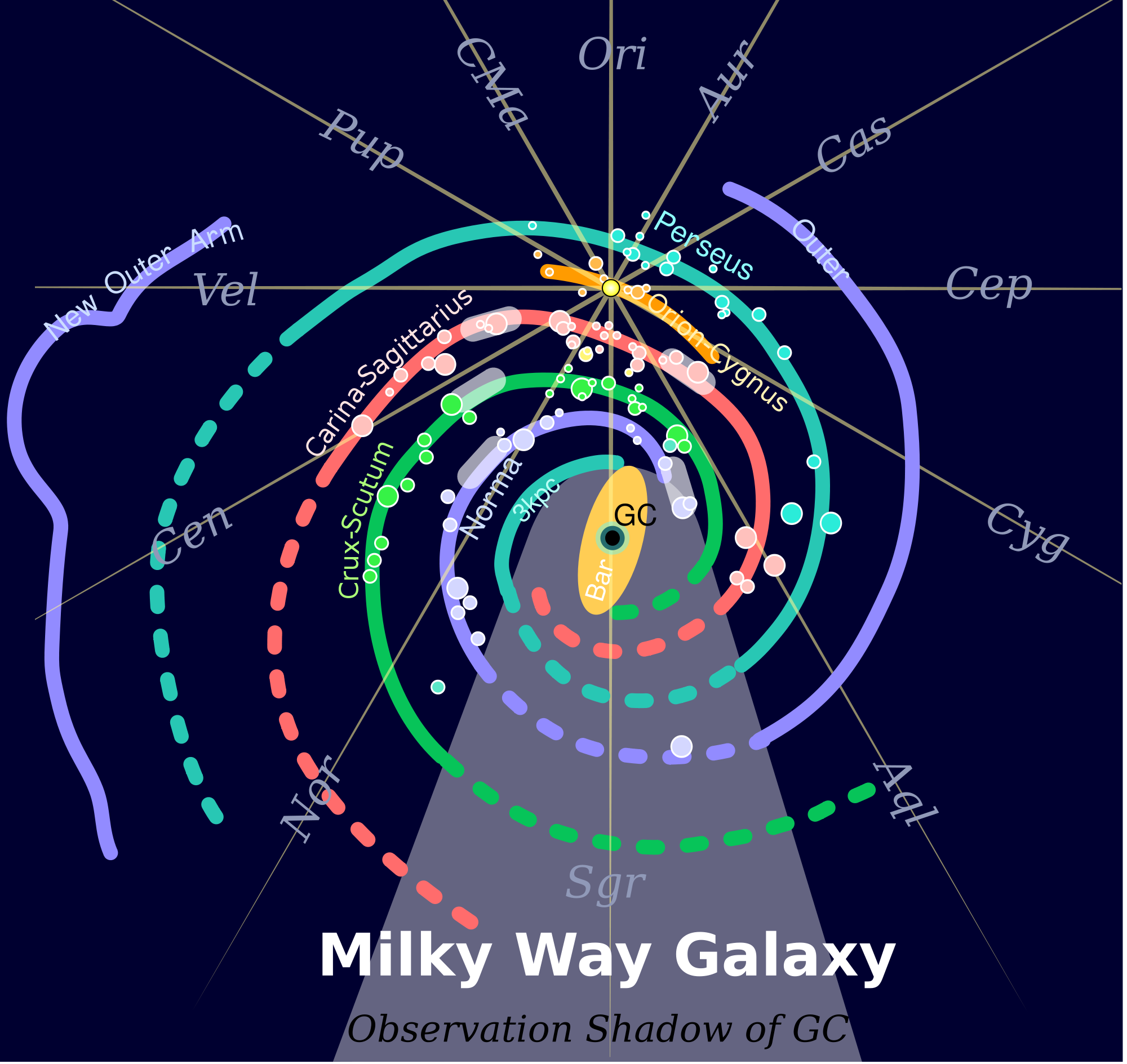 We base it on pictures we have of similar galaxies, as we know they occur in general classes, or groups.

We also, to some degree, can map the speeds and positions of the various components of the spiral arms and that is confirmation that we have the general shape correct, although from memory, we did recently discover some new galactic features that previously had been hidden by dust. As John says in his answer, that is a difficult feat to achieve.

As well as visual observations, we use radio waves, infrared and ultraviolet wavelengths to try to peer through obscuring dust, to establish the most accurate map. As Rob Jeffries points out in his comment below, mapping of the hydrogen line (at a wavelength of 21 cm), is a vital part of this process. For more on this, please see Hydrogen Mapping in the Milky Way, or Kevin's answer on this page.

This is NGC 6744, which according to Wikipedia, may closely resemble the Milky Way. 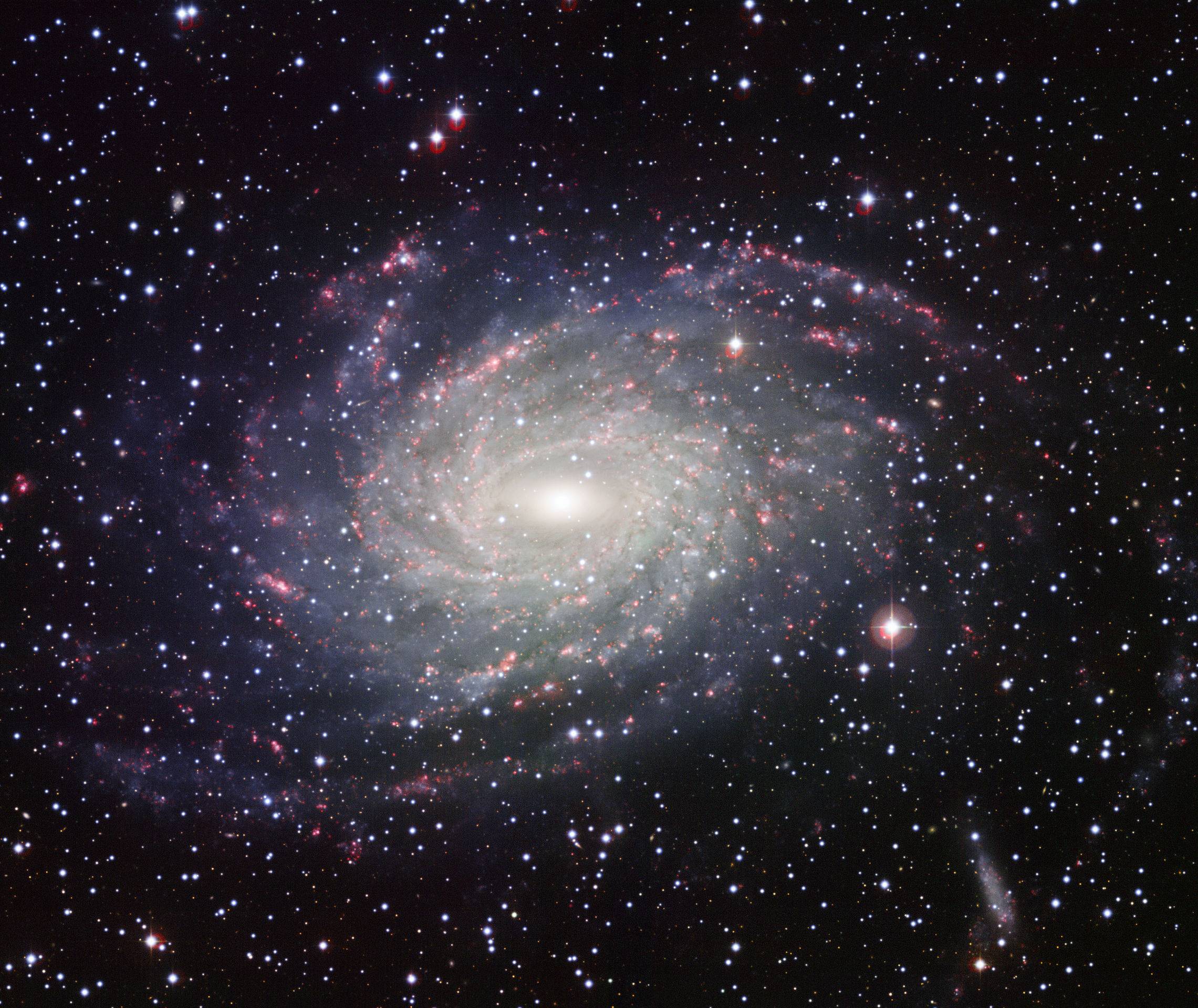 And, just to finish off and see how far we have come, here is a William Herschel map, from the mid 1700s. Hershel, just in case the map is unclear, was mapping looking edge on into our galaxy, as we normally see it.

Although the map is, understandably, crude by modern standards, personally speaking, I feel this should not take away from the time and effort put into making it, considering the cloudy English skies he worked under.

We determine the shape of the Milky Way simply by measuring the positions of objects within it. Well, I say "simply", but this is an extraordinarily hard thing to do for lots of reasons. As a result there is still lots that we don't know about the Milky Way. For example although we believe the Milky Way is a barred galaxy we don't know how big the bar is.

The good news is that the Gaia mission will eventually measure the positions and velocities of about 1% of all the stars in the Milky Way. That should give us a pretty good idea of its structure.

Before satellites or aircraft were invented, how did people make maps? You start at one point on the ground and carefully measure the angle to some landmark, say a mountain. Then you measure the distance. You make many many such measurements of angles and distances between various objects. Then you scale all the measurements down to something manageable and carefully draw all these on a piece of paper. Stand back and you can see what the land would look like from space.

The same thing is true in principle of the Milky Way. You can directly measure angles to the stars. When astronomers developed ways to measure distances, they could plot, this angle from north, this many light years, so relative to us that star is here. Plot many stars this way and you will see the shape of the galaxy.

Yes, there's more to it than that. For one thing there's the complexity that the Earth is rotating, then it's also revolving around the Sun, and the Sun itself is moving. You have to be able to subtract out all these motions.

And measuring distances to the stars is not trivial, but I suppose discussion of how astronomers do that is a different question.

Actually it is quite simple and this method, Integrated Tomographic Imaging, has produced what is a fairly accurate 'top down' image of the Milky Way. You start with a catalog of known stars their elevation, azimuth, actual estimated brilliance and estimated distance. Sort by brilliance.

You then can polar plot in a 3 axis grid system the stars location. assigning a brilliance, that has been estimated, from the catalog with one or two methods (depending on your graphics program like Rhino, or MicroStation that can handle the large XYZ values a galaxy would have) a. a light source whose brilliance is directly proportional to the data or b. a sphere whose radius is proportional to the brilliance or a function of both. If your catalog has a spectral data value you can then adjust the star point/sphere color to match.

Run the render command (Rhino can actually show you the photographic end product using the GL render viewport/all view ports option on the tool bar, allowing you to do a really fun spin and tip manipulation real-time with your mouse)

Then using any of the view you would have a perspective , top front or 'side' view of the galaxy. NASA has such a work product on their web site. There are a huge number of Milky Way top down drawings on the web that used this method. Google "Milky Way Maps" there are hundreds of them, my favorite is the 'subway' from oneminuiteastronomer... as you can see from my icon.

the same technique was used to create the fantastic image of the known universe using the data from the SDSS, Sloan Deep Sky Survey. very humbling.

The SDSS is for galactic structures in the known or visible universe. not our galaxy specifically. more along the lines of galactic superclusters.

The Question posed is how is it possible, not a step by step for those who want to play at home. The question is conceptual, and the answer I provided is as well. as to the actual data I have pointed out some generally accepted accurate sources. and a different survey that uses the same approach. the SDSS diagrams are on the www.sdss3.org.

Not the answer you're looking for? Browse other questions tagged visualization milky-way astrophotography or ask your own question.

3
Could we recognize our galaxy by looking at it from a different place in the universe?