How to tell if area is displacement or distance? 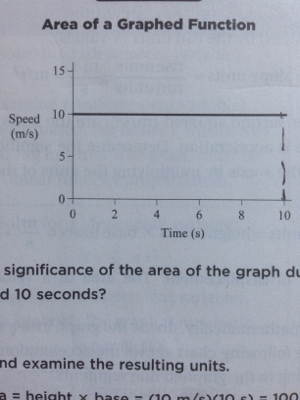 why is it not called "velocity v. time"? how do you know?

If the y-value can be either positive or negative, the direction is then indicated. i think this is why it should be called velocity but not speed.

The writer of the book says that the area of this graph is however displacement.

edit my book says when direction is changing speed may be use to express rate of distance. But if that is the case (speed= rate of distance not displacement) HOW COME WHICHEVER (speed or velocity) IS USED, THE AREA IS ALWAYS DISPLACEMENT NOT DISTANCE?

The graph shows a constant speed, which is positive, so we know that the velocity is not changing sign. Depending on the context of the graph (is it dealing with 1D motion or curvilinear motion) we could tell a lot.

That said, let's define displacement as a change in position. This would be the difference in two position vectors. A distance would be total path length. For example, if one travels completely around a circular path once, the displacement would be zero, but the distance would be $2\pi r$, where $r$ is the radius of the circle. In some cases, such as constant speed like the graph shows from 0 to 10 seconds, the displacement and the distance will be the same. If there was a change of sign of the what the author listed as ``speed'', then there would be a difference.

At this level, I don't know if it's worth nit-picking between the difference of speed vs velocity component. If one was dealing with accelerated motion, it would be worth noting.

HOW COME WHICHEVER (speed or velocity) IS USED, THE AREA IS ALWAYS DISPLACEMENT NOT DISTANCE?

The first integral is interpreted geometrically as the area under the $v_s$ vs $t$ curve between $t_1$ and $t_2.$ The difference on the right side is simply the difference in the positions $s_1$ (position at time $t_1$) and $s_2$ (position at time $t_2$), irrespective of the path the particle took. It is displacement because of the way the velocity component is defined and the way calculus works. If you want to find the total distance you would need to sum the absolute value of each piece of area.

The simple answer is that displacement, in this context, is distance. There are other uses, such as the weight of a ship, but that is not germane.

Consider that the area under the line is x times y. In this case the x axis has the units of seconds, and the y axis has the units of meters per second. So when multiplying them out, $$sec\times\frac{meters}{sec} = meters$$ This makes sense, because effectively the graph establishes that the object travelled at a constant 10 m/sec for 10 seconds, so it was displaced from its starting point by 100 meters.

You're correct. The speed is only the magnitude of the velocity. However, since the speed doesn't change it cannot change direction, as that would require acceleration. Of course, that assumes the speed is only in one dimension, because it could plot the speed of something with a circular motion, or any other motion for that matter. A spaceship in a circular orbit has the same speed all the time but the velocity changes with the rate of acceleration due to gravity.

We can therefore not really say anything about the velocity, unless we assume that the speed is only in one direction.

Displacement is commonly defined as the difference between the final and initial position of a point, while distance is a numerical description of how far apart objects are. For example, the spacetime interval (distance) for two events one light year between each other in time and one year in time is zero.

Distance is just a description of "how far" two points are from each other, while displacement refers to the length of the shortest path between to points.

Not the answer you're looking for? Browse other questions tagged terminology velocity speed distance displacement or ask your own question.

0
Help finding Delta T for a known position displacement with known accel/decel, etc
0
Distance traveled from displacement
2
Displacement vs. Distance
0
What does the first derivative of (2-norm) distance with respect to time tell us?