It is known that electroweak and QCD phase transitions in the standard model are so-called “crossovers” [1]. What is the difference between a crossover and a phase transition of the second kind?

As a handwaving definition, “crossover” is a generic term to describe a smooth transition between two separate phases of matter, upon changing some (thermal/non-thermal) parametres.

Well-known examples in strongly-correlated condensed matter are BEC-BCS crossover and the Kondo effect. In ultracold Fermi gases, a BEC-BCS crossover occurs by tuning the interaction strength, where the system “crosses over” from a Bose-Einstein-condensed (BEC) state to a Bardeen-Cooper-Schrieffer (BCS) state without encountering a phase transition. In certain metallic compounds with a dilute concentration of magnetic impurities, the Kondo effect occurs when the temperature is reduced below a certain threshold, and the system “crosses over” from a normal Fermi liquid phase (weakly-coupled to impurities) to a “local” Fermi-liquid phase where conduction electrons form strongly-bound spin-singlets with the impurity electrons, without any phase transition involved.

The key point is that in a crossover, no canonical “phase transition” occurs, although there is a drastic change in the phase of the system. Remember that “phase transitions” are defined à la Ehrenfest (discontinuities in the derivatives of the Free energy functional) or à la Landau (symmetry-breaking mechanisms). A crossover is thus not associated with a change of symmetry, or a discontinuity in the free energy functional. Typically, it occurs in a region of the phase diagram, rather than a singular point.

Microscopically, in a crossover, the ground-state of the system changes radically (so that any perturbative expansion around the original ground-state will fail to capture the new ground-state), but in a very smooth manner; ie., without any discontinuity in the thermodynamic observables (which is the hallmark of phase transitions).

Beyond that handwaving description above, if we define a phase as a fixed-point for the renormalization-group (RG) flow [see eg. Ref. 1], then we arrive at a more precise definition for a crossover. Crossover happens when more than one critical fixed-point appear in the phase diagram [Ref. 2, sec. 3.11]. In such cases, the phase of the system depends on several relevant parametres (in the RG sense). The criticality is therefore richer: Tuning these parametres leads to different types of criticality (or universality classes).

Ref. 2 provides a simple instance of crossover for a Heisenberg model with a uniaxial anisotropy: 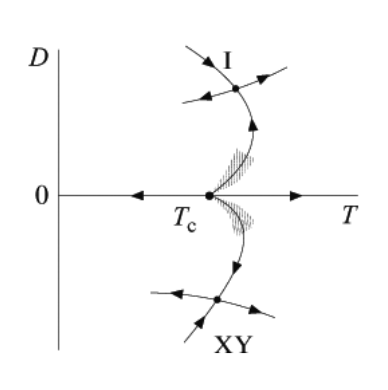 The figure shows critical behavior of the Heisenberg universality type for $ D = 0 $. At high temperatures, the system is in a paramagnetic (disordered) phase, and as one lowers the temperature (below $T_c$) the system orders.

For a finite $D$, when $ D > 0 $, the critical behaviour of the anisotropic Heisenberg model is governed by an Ising-type fixed-point (marked with ‘I’ in the figure), while its critical behavior for $ D < 0 $ is determined by an XY-type fixed-point. These are two radically different phases (and universality classes), and correspond to disparate ground-states. This indicates also that the Heisenberg fixed-point with $ D = 0 $ has two relevant variables, $ t \propto T − T_c $ and $D$ (besides the external field).

There is no universally accepted definition of "crossover", so no answer is objectively correct, but I've usually heard the term used in a slightly different way than what AlQuemist describes. AlQuemist seems to be describing a Kosterlitz-Thouless transition, at which the free energy density is smooth but non-analytic (so that a perturbative expansion from one phase cannot reach the other phase). While very difficult to detect experimentally or numerically, KT transitions are still "sharp" in the sense that the points of non-analyticity form lower-dimensional submanifolds of parameter space. If you define a phase to be a maximal analytic connected region in parameter space, then a KT transition is still a true phase transition, although a somewhat nonstandard one because the free energy density remains smooth.

I've heard the term "crossover" to describe something different - a qualitative change in the nature of a state within the same phase. If two points of the phase diagram are well-separated, then the corresponding states can appear qualitatively different even though they're in the same phase (and therefore have identical symmetries, extreme IR behavior, etc.). One way to make this semi-precise is if there are two different correlation functions $C_\varphi(x - y) := \langle \varphi(x) \varphi(y) \rangle$ and $C_\psi(x - y) := \langle \psi(x) \psi(y) \rangle$ whose correlation lengths (or decay exponents, in the case of quasi-long-range order) cross each other within a phase. Roughly speaking, the "most important" observable in a state is the one with the longest correlation length (or slowest decay exponent), so at this kind of crossover, the "most important" observable for describing the state's behavior changes. Nevertheless, everything remains analytic so there's no sharp qualitative change in the state's behavior - clearly there will be a region within the phase where both correlation functions have similar correlation lengths/decay exponents, and so are roughly equally important for describing the state's long-distance behavior.

Not the answer you're looking for? Browse other questions tagged quantum-field-theory terminology phase-transition or ask your own question.

8
what is meant by "crossover phenomena"?
5
How is the free energy of Kosterlitz-Thouless transition smooth yet non-analytic?
5
Paramagnetic/ferromagnetic transition under a magnetic field
7
What crossed over at the electroweak crossover?
4
Why is gravitational wave production in early Universe disfavoured for crossovers?
1
Difference between first order, second order, and smooth cross-over phase transition particularly in the context of quantum field theory