Is Veritasium's "Shadow Illusion" caused by Image formation or Diffraction?

I was watching this video on the YouTube channel Veritasium. In this episode, the host shows people paper containing holes of different shapes in the middle. So there is a paper which has a hole in the shape of a triangle, another one containing a square, a circle and so on.

Every time you place a cardboard against the sun and observe the shadow, a circle is obtained,at the centre of the shadow, regardless of the shape of the hole. The host explains that this is the image of the sun that we are seeing on the shadow.

I find this difficult to comprehend.

My question is: Aren't 'lenses' required to converge the rays to make an image? How can a hole in the centre of a cardboard form 'images'. When the rays from the sun reach the cardboard they are going to be parallel. How can a hole in the center of a paper form an image from parallel rays? Is the host correct? Is this caused due to diffraction, where in the light bends around the hole, blurring the edges and hence forming a circle regardless of the shape of the hole?

PS: I am sorry, I couldn't summarise the question into a nice title.

It's a pinhole camera image of the sun - as DJohnM's comment said.

My question is: Aren't 'lenses' required to converge the rays to make an image? How can a hole in the centre of a cardboard form 'images'.

No - all that is required is an aperture (hole) to restrict the range of rays that reach the screen to form an image. All a lens does is allow a wider bundle of rays to be used to make the image = more light. In terms of making the image it is the hole formed by the center of the lens that is important.

Actually, both the other answer and Veritasium himself are wrong. The shape shown is not due to the pinhole effect (the holes are way too large for that). In fact, the resulting image isn't even a circle!

If the sun were a point source - an infinitesimally small source of light - the triangle hole would indeed result in a triangular image.

(Projection of a triangle from a point-source. Source)

The reason the image is not a triangle is that the sun is not a point-source, but a circular-source. We can model that by treating the sun as many different point sources, equally spaced throughout a circle.

Each point source will contribute one triangle to the resulting image. Each triangle will overlap heavily with its neighbors, but be slightly offset from them. The final image will be the sum of many different overlapping triangles whose centers are equally spaced around a circle (or an ellipse, depending on the angle between the sun and the wall). The edges will be faded because only a few point-sources contribute there, while the center will be bright because many point-sources contribute there. 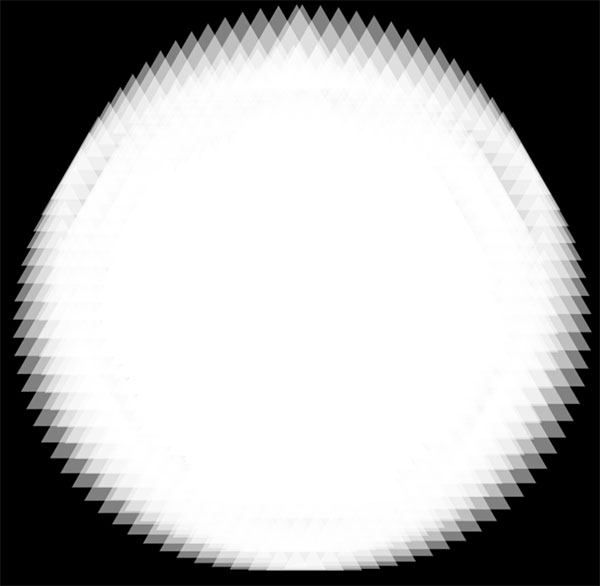 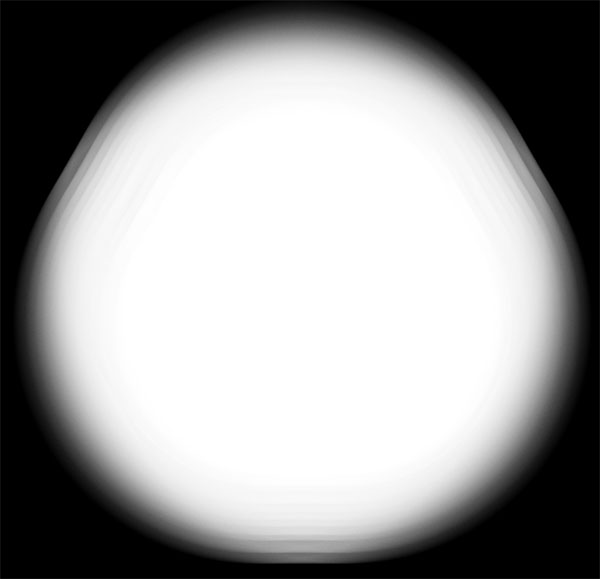 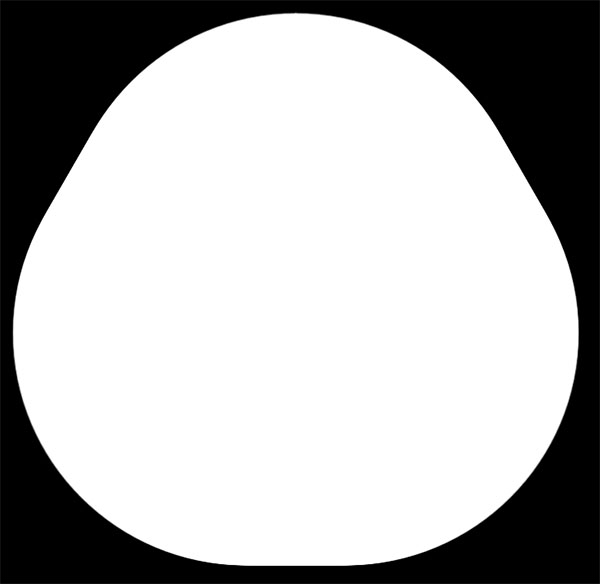 The ultimate shape of the image with edge-fading removed

So as you can see, the shape is circular, but it's not a circle.

Interestingly, while researching this topic, I found a video by someone who accidentally created an experiment for this. They shined a rectangular LED spotlight through a small triangular hole. LED spotlights are unusual because they consist of an array of very bright LEDs (basically point-sources) that are equally spaced, with empty space between them. Essentially, it's a real-life point-source approximation of a rectangular light!

As expected, they found a result similar to the "few point sources" image above, but with the triangles arranged in a rectangle rather than a circle. 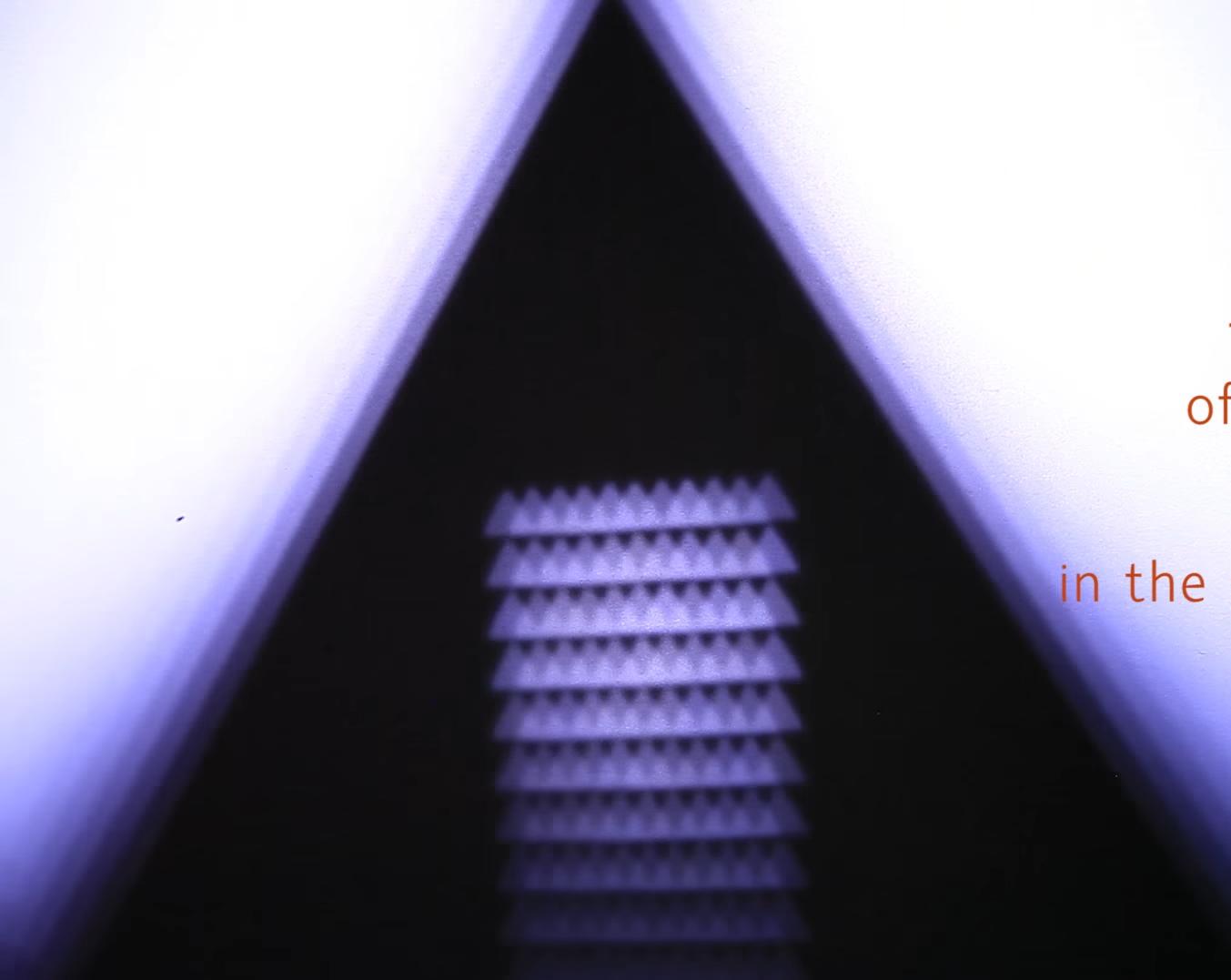 (They attributed the effect to diffraction, but that's actually incorrect. The hole would need to be on the scale of a few micrometers before diffraction would be noticable)

Not the answer you're looking for? Browse other questions tagged optics sun diffraction shadow or ask your own question.