Naked singularity: how would it behave?

We know that the theory of cosmic censorship prevent singularities from existing without an event horizon that hides them from the Universe. Now let's assume that this theory is somehow false, and a naked singularity appears in the solar system. How would we notice it for the first time, what would it look like, how would it behave and could we use it for someting useful?

We know that the theory of cosmic censorship prevent singularities from existing without an event horizon that hides them from the Universe.

We don't really know whether cosmic censorship is true or false. It isn't even clear how to state it rigorously as a hypothesis. For some info on the current state of CC, see this question. There are serious suggestions that gravitational collapse may in some cases result in the formation of a naked singularity.

Now let's assume that this theory is somehow false, and a naked singularity appears in the solar system. How would we notice it for the first time, what would it look like, how would it behave and could we use it for someting useful?

A naked singularity's very definition makes it impossible for GR to say how it would look or predict how it would behave. A singularity is by definition a situation you get when geodesics are incomplete. So for example, if a ray of light hits a singularity, by definition we can't use GR to trace the ray through the singularity and see where it goes when it emerges. More generally, naked singularities can in general emit arbitrary information and unlimited energy (in GR). That means that we can't use GR to predict what comes out of them (without even worrying about tracing rays through them). This is shown by John Earman's memorable figure and caption below: 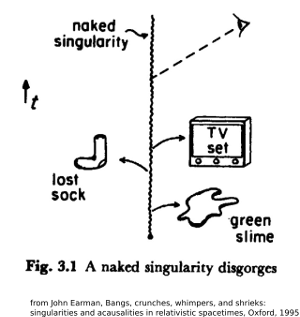 The reason that GR can't predict what comes out of the naked singularity is simply that we can't even formulate the initial conditions in an appropriate way, because a Cauchy surface doesn't exist. For more on this, see this question.

If a naked (timelike) singularity did exist, then GR might be able to tell us about light rays that passed near it but not too close. That is, we might be able to construct a partial Cauchy surface, which might be good enough to tell us, for example, what distortions we would see in the background of stars. We would probably expect the large-distance behavior of such a spacetime to be characterizable just by its mass and angular momentum (assuming it doesn't have weird properties like the kind of topological behavior you get in things like Taub-NUT spacetimes), in which case the part of the sky far enough away from the singularity would probably look approximately like what you would get with a Kerr black hole. I would not expect to be able to extend this to regions very close to the singularity, where you would have closed, timelike curves, and therefore wouldn't even be able to formulate initial conditions for an optical simulation.

Assuming no accretion disk, the gravity lensing of an overextremal Kerr singularity with a/M=2 in front of the Milky Way background would look like this when you view it from the equatorial plane (the left side of the singularity is rotating toward the observer): 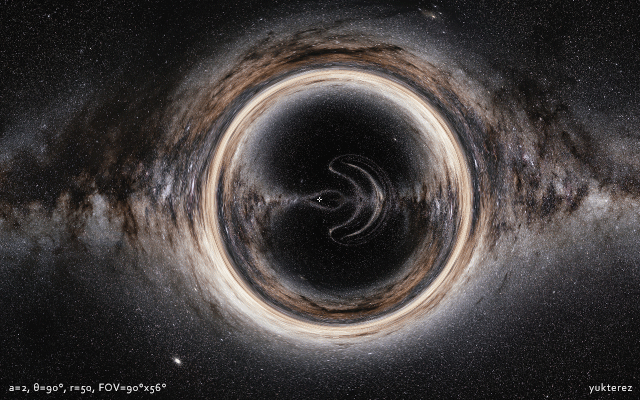 At 45° you see a dark spot where the geodesics lead into the negative space behind the ring: 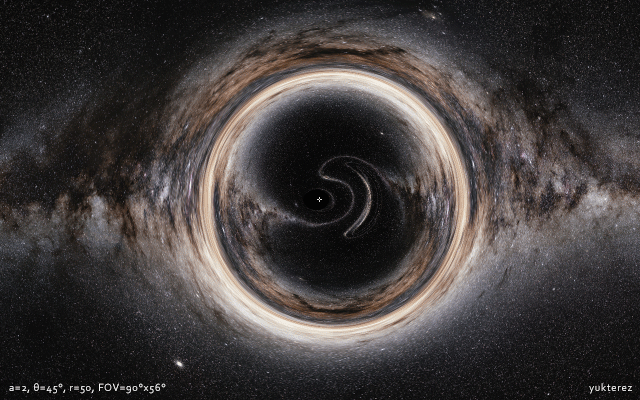 And even more so when you view it from above (counterclockwise rotation): 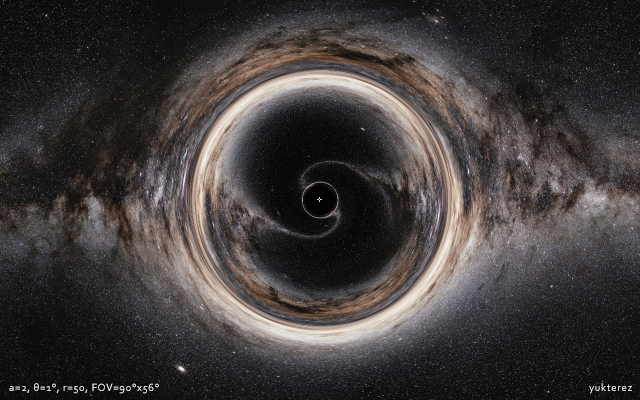 For comparison the same background image from ESO/Brunier without distortion: 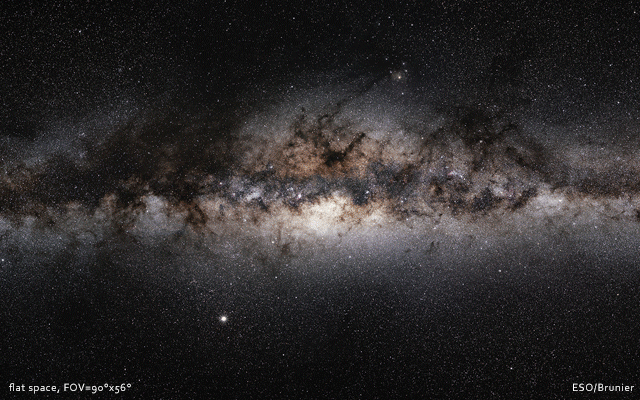 Another example of a spinning and charged naked singularity with an accretion disk: 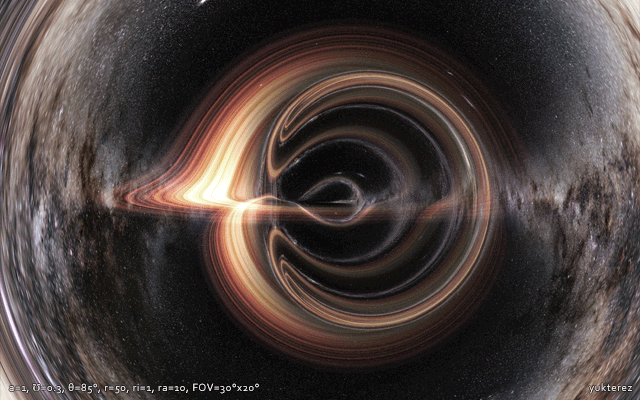 For comparison a black hole with similar, but subextremal properties: 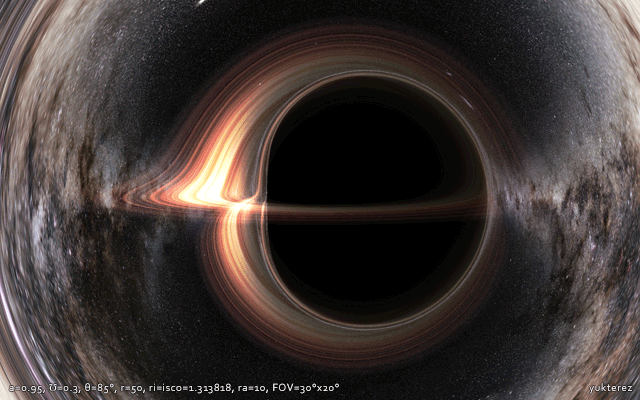 The dark spot in the 2nd and 3rd image might also be bright, depending on whether the negative space behind the ring is empty or a universe of its own.

how would it behave?

Assuming the ring's diameter is large enough, if Alice and Bob would fall through the ring from opposite sides simultaneously, they also should emerge simultaneously on the other side of the two sheeted space:

We know that the theory of cosmic censorship prevents singularities from existing without an event horizon that hides them from the Universe.

Actually, we don't. Don't forget that cosmic censorship is just a hypothesis. It isn't a rigorous well-tested theory like General relativity. See this on the Wikipedia Cosmic censorship article: "The hypothesis was first formulated by Roger Penrose in 1969, and it is not stated in a completely formal way". Personally I think the theory of general relativity prevents singularities from existing. Or should I say point singularities, because the event horizon is a form of singularity, see the Wikipedia Schwarzschild radius article.

Now let's assume that this theory is somehow false, and a naked singularity appears in the solar system. How would we notice it for the first time, what would it look like?

IMHO you wouldn't see anything spectacular, because it's still something small and massive. Its gravitational field doesn't go away. Light can't get out of it. So IMHO it would look something like the "bullet hole in a car" black hole depiction on the right of the Wikipedia black hole article. Only with a smaller bullet hole. If however you threw something at it, you’d see fireworks akin to a gamma ray burster. It would look something like an arc welder. Don't stare at it, or you'll damage your eyes.

How would it behave?

And could we use it for something useful?

Assuming we all agree that destroying planet Earth is not something useful, then no.

Not the answer you're looking for? Browse other questions tagged general-relativity causality singularities time-travel or ask your own question.

23
Why exactly are singularities avoided or “deleted” in physics?
5
Rotating black holes and naked singularity
7
What is the current status of cosmic censorship?
2
Metric diameter of a ring singularity

1
Do zero gravitational-force points produce Naked singularities?
7
Does Violating Cosmic Censorship Really Mean Violating Causality?
7
What is the current status of cosmic censorship?
3
Would a 5-dimensional black hole actually break laws of physics?
7
Naked singularity
0
Would a “naked singularity” and a spinning black hole behave the same?
2
Does an event horizon imply a singularity?