Which is has the highest (greatest) sound intensity - Sine, Square or Sawtooth waveform?

From this, https://electronics.stackexchange.com/questions/42904/square-wave-sine-wave-is-more-audible I now understand that a Square soundwave will be perceived louder than that of a Sine sound wave when played at the same frequency (for example 500 Hz). However, how about a sawtooth sound wave; which order from highest to lowest sound intensity is it placed?

I know that the Sine wave is only composed of the fundamental frequency and hence produces the lowest pitch - which is less sensitive to human ears. Square sound waves are composed of infinite odd harmonics, and sawtooth waves are composed of both odd and even harmonics. From experimenting, I have found that square sound waves have greatest sound intensity (dB) than sawtooth, which has greater sound intensity than sine waves. What is the explanation behind this system of order?

// Extra info. I conducted an experiment where I put a speaker and a soundmeter (Decibel 10th App) at a distance away (say 10 cm) from each other, then played 1000 Hz Sine wave and measured the intensity of it. Similarly, I did this for 1000 Hz Square, and 1000 Hz Sawtooth. What I found was that the sine had an intensity of 94dB,square had 95dB and sawtooth had 89 dB. I want to investigate the effects of the waveforms on the intensity of sound.*Oh, and the amplitude was set at a constant.On the soundmeter app, the update frequency set to 10 Hz, and calibration set to 0.2 dB. In a quiet room (during the experiment), the sound intensity was measured to be 52dB

Note that this measure is an RMS acoustic pressure, not acoustic intensity, which is "the power carried by sound waves per unit area in a direction perpendicular to that area". To measure intensity you need an intensity probe (see pg. 13 of linked pdf).

Let's clarify one point before we continue. When you say:

the amplitude was set at a constant

I understand that to mean that the peak amplitude of the waveform was constant.

Given constant peak amplitude, and the fact we know the nature of $p(t)$ for each waveform we can immediately intuit which one will have the highest value of $L_{eq}$. 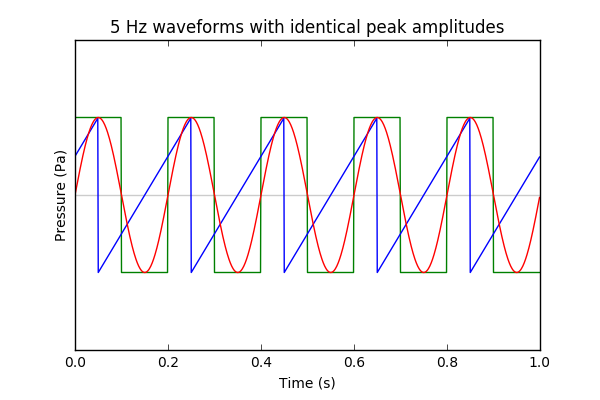 Square > Sine > Sawtooth. It's easy to see that the square wave spends almost all the time at the highest pressure value. The sine wave rolls off slower towards the maximum than the sawtooth function.

Using Adobe Audition, we can generate all three signals with identical peak amplitudes. I chose -12.0 dBFS. Then we can use the 'Amplitude Statistics' tool to report Total RMS Amplitude, and unsurprisingly we find:

Not the answer you're looking for? Browse other questions tagged waves acoustics harmonics or ask your own question.

6
Why do I hear beats through headphones only at low frequencies?
4
Why is root mean square pressure used in the definition of sound pressure level?
4
Sound Intensity and Frequency Relation
1
Why do we add intensities for coherent sound sources?
0
Difference between the first and 3rd harmonic is a open-closed pipe?
0
Does switching a laser on create multiple frequencies?
2
Why do lower frequency need more cone excursion?
0
Resonant frequencies in organ pipes
2
Does electrical sawtooth wave actually produce sinusoidal oscillations at harmonic frequencies?