Telling if geometry is curved without Riemann tensor

If you're only interested in telling whether a certain geometry is flat or curved, and you do not need to know in which way it is curved, do you still need the Riemann tensor?

When I try to visualize something flat, I think of a sheet of paper, and for something curved I think about the surface of a sphere. On the sheet of paper, if you first go a specific distance A to the right, then turn 90 degrees to the left and go a disance B forward again, you'll end in the same point as when you first start going up until you've traveled a distance B, turn 90 degrees to the right and go a distance A forward. If you do the same thing on the surface of the sphere, you won't end up in the same point anymore (I hope the image clarifies my reasoning). 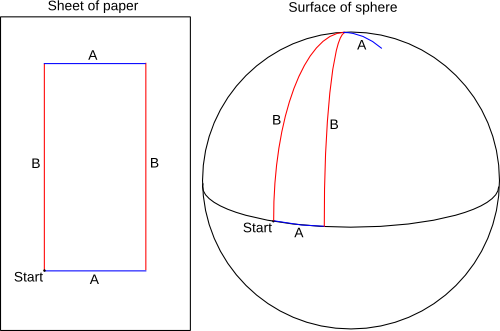 The things I was wondering about:

I started thinking about this in the context of special and general relativity, but I think this 2D example captures the essence of my question.

Having slept on this for a bit, I think that this reasoning may be valid in a 2D geometry, but no longer for even just a 3D space: in a 3D environment, I could imagine two 'people' performing a similar experiment. If they don't end up in the same spot, I think it's fair to deduce that the space is curved. However, if they do end up in the same spot, I do not believe that one can conclude that space is flat: I imagine it's possible that the two inhabitants of the 3D world could find that they are rotated with respect to each other.

So my guess would be that:

It would be great if someone could confirm or correct this.

Well, the very notion of curvature relies on the Riemann curvature tensor, in fact, the curvature tensor arises from the fact that in a general curved space, the second covariant derivatives may not commute:

That being said, however, I think at minimum to determine whether something is curved or not, in a general sense, you require the metric tensor, which will allow you to compute connection coefficients. As in G.R., I will assume for a second, that we are in a torsion-free situation, so that the connection coefficients become Christoffel symbols. Then, one can simply deduce the curvature by looking at pairs of geodesics, that is solutions of:

where $\Gamma^{a}_{bc}$ are the Christoffel symbols calculated from the metric tensor $g_{ab}(x)$ as:

Then, the key point is that:

However, in general to deduce the geometry, it is much easier to simply use the geodesic deviation equation, which in fact does rely on the Riemann curvature tensor:

where $\xi^{a}$ is a vector the measures the separation/deviation vector of neigbouring geodesics.

Take your drawings, and imagine moving a vector around the loops you draw. Specifically, move the vector using parallel transport i.e. during each infinitesimal movement keep the vector parallel to its previous direction. If the space(time) is curved then when you have travelled around the loop you'll find the direction of the vector has changed.

If we take the loop to be a parallelogram defined by the two vectors $u$ and $v$ then the change after moving round the parallelogram is given by:

So the change in a vector is directly related to the magnitude of the Riemann tensor, and you can detect the curvature just by measuring the change in your vector.

Not the answer you're looking for? Browse other questions tagged differential-geometry curvature or ask your own question.