How does one correctly interpret the behavior of the heat capacity of a charged black hole?

Note: Although I have a provided an "answer" to the question, I did not resolve all the questions in this post satisfactorily. I invite anyone willing and able to provide a better answer, which I would be glad to accept instead. 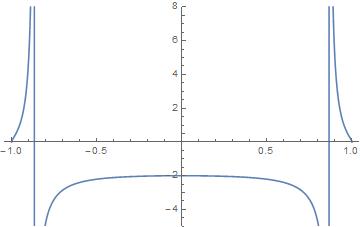 For small $q$, the heat capacity is negative (this is the expected behavior, just like in Schwarzschild), and as one adds charge, the heat capacity steadily decreases. However, as one can easily see, the denominator has zeros at $|q|=\frac{\sqrt 3}{2}$, and therefore the heat capacity diverges (!) to $-\infty$ at these values, "emerging from $+\infty$" for larger values of $ | q |$. In, once again, strictly decreasing fashion. What I would like to understand is:

The paper pointed out by Daniel's comment gave me a starting point to find more literature on this topic and do further research. After a while, it became clear to me that my question is actually an unsettled (research) question. Therefore, a definitive answer cannot really be expected. Nonetheless, I think it's valuable to provide something of an answer. Since no one else has done so, I will now simply outline the main results of my own research. This "answer" will only address my second question:

What does the divergence in the heat capacity mean?

This seems to be the question that has attracted most attention from actual researchers. I think that, chronologically, this paper by Davies (paywalled, regrettably), was the first to bring up the fact that there is an infinite discontinuity in the heat capacity of a Reissner-Nordström (or rather, its generalization, called the Kerr-Newman metric) black hole at $\frac{Q}{M}=\frac{\sqrt{3}}{2}$. A similar thing occurs in the Kerr-Newman setting when the angular momentum to mass ratio exceeds a certain value.

As can already be seen from the abstract, Davies argues that there is a physical meaning to this divergence: He views it as a phase transition. We note that, for even higher charges, the black hole has positive heat capacity and can thus be in equilibrium with a heat bath. Regrettably, Davies refrains from commenting on any depth why there is (or should be) a phase transition as the charge is increased. In the Kerr ($Q=0$) case, he does suggest an interpretation for the phase transition that occurs at a certain value of $J$ (for fixed $M$):

Newtonian calculations [...] indicate that a rotating, self-gravitating fluid becomes unstable and loses its axisymmetry at a critical value of the ratio (rotational energy/Newtonian gravitational energy). I am grateful to Dr D. W. Sciama for drawing my attention to a striking result by Bertin & Radicati (I976), who have recovered this instability as a thermodynamic second order phase transition [...]. In the higher angular momentum phase, the axisymmetric spheroid gives way to a triaxial ellipsoid. This suggests the possibility that in a similar fashion the Kerr black hole becomes unstable [...] and enters a non-axisymmetric, dynamic phase in which new thermodynamic degrees of freedom appear.

While $C_\Phi$ is finite and negative everywhere, $C_Q$ has an infinite discontinuity at $Q/M =\frac{1}{2}\sqrt{3}\approx 0.87$. At this point its sign changes too: $C_Q$ is positive for more highly charged black holes. This remarkable behaviour of $C_Q$ occurs because the $Q, T$ coordinates are double valued, which is illustrated in Fig. 5 [reproduced below]. The $Q, \Phi$ coordinates, however, form a non-degenerate coordinate system everywhere. The physical reason for the double valued $M (Q, T)$ is that the temperature of a black hole tends to zero not only in the limit $M\to\infty$, but also in the lower limit $M \downarrow Q$ if $Q$ is kept constant, since in both cases the surface gravity vanishes.

In order to interpret the discontinuity in $C_Q$ in terms of a phase transition, the appropriate thermodynamic potential to consider would be the Helmholtz free energy $F(T, Q) =M-TS$ instead of the usual Gibbs free energy $G(T, \Phi) = F -Q\Phi$, since the heat capacities can be written as $C_Q = - T(\partial^2 F/\partial T^2)$ and $C_\Phi=-T(\partial^2 G/\partial T^2)$, respectively.

In analogy to the Ehrenfest classification [which classifies phase transitions by the lowest derivative of the free energy that is discontinuous at the transition] of phase transitions, we might call the dis- continuity in $C_Q$ a ﬁrst order phase transition, since $(\partial F/\partial T)_Q$ becomes inﬁnite at $Q/M =\frac{1}{2}\sqrt{3}$. But this terminology does not seem to be very appropriate here, as there is no such thing as a latent heat in this case, and most other thermodynamic functions are well behaved (see Appendix 1). 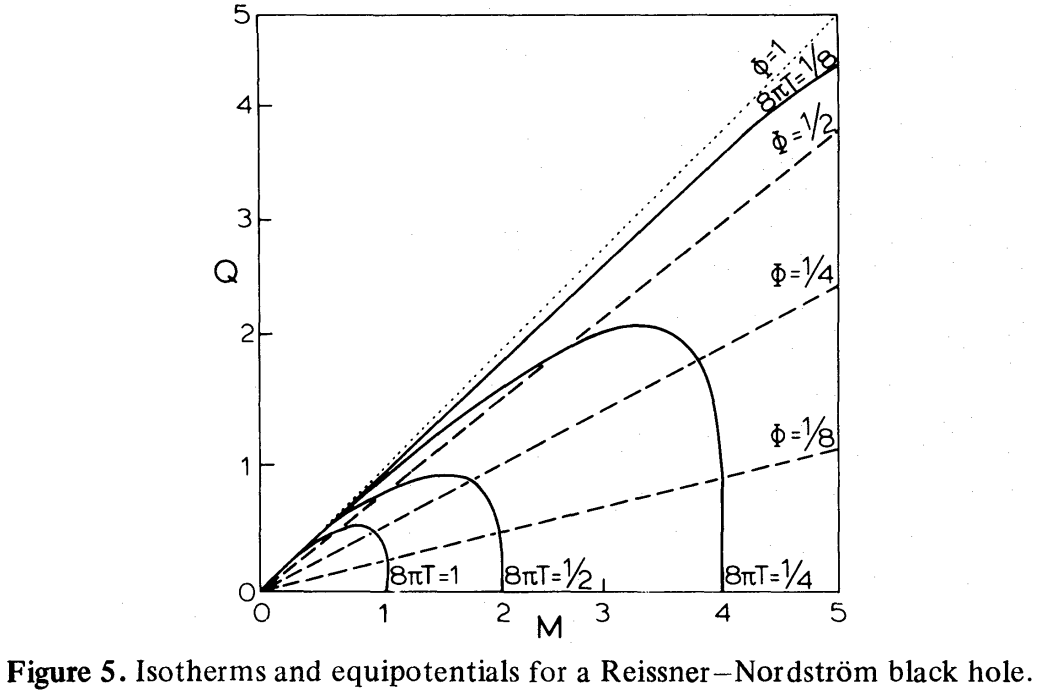 In the above-mentioned appendix 1 we find a demonstration that only those functions that explicitly depend on the (supposedly) degenerate coordinates $Q,T$ are affected by the divergence of $C_Q$. This is done by simply calculating a number of thermodynamic functions and showing that they have no singular behavior, unless they depend on the $Q,T$ coordinates.

Finally, near the end of his paper, Hut discusses the meaning of the singularity:

[...] the inﬁnite discontinuity cannot be considered as a phase change at all. Here the entropy is continuous together with all its derivatives [...]. But this inﬁnite discontinuity has a physical significance which in a way transcends that of a phase transition. Although the internal characteristics of the system do not change here, the way the system can be brought into stable equilibrium with an external environment changes. On the side with a higher $Q/M$, $C_Q > 0$, and the system can be in equilibrium with a heat bath. But at the lower $Q/M$ side, $C_Q < 0$, and the system can only be in equilibrium if it is isolated from the outside world. Thus instead of a phase transition we encounter here a transition from a region where only a microcanonical ensemble can be used to a region where both a canonical and a microcanonical ensemble are appropriate.

More recently, there have been a few new publications on the subject, but in my opinion they do not contain any very compelling arguments, so I don't think discussing them is really worthwhile. In any case, it appears that the issue has not been completely settled. Finally, I note that, to me personally, the explanation by Hut seems quite convincing.

Of the three factors the first two are strictly positive for (non extremal) BHs. (The first because, well, BHs are not weird enough to have negative temperatures, and the second because the second law.) Consequently, the heat capacity can only diverge if $\left(\tfrac{\partial T}{\partial M}\right)_Q$ vanishes. Said differently, the heat capacity diverges when $T$ as function of $M$ at fixed $Q$ has a maximum.

Clearly, (and I think this is also point out by Hut), $T$ as function of $M$ at fixed $Q$ must have a maximum in the range $|Q|<M<\infty$ because it is positive and vanishes at both boundaries. (I guess we could further ask the question of why that is, but I won't for now.)

This answers you second question:

Physically, should one expect a diverging heat capacity at a certain charge (for fixed mass) at all? Why is it located at $q=± \sqrt{3}/2$?

For the first question, I really don't know if we should expect a deeper physical reason for this.

Not the answer you're looking for? Browse other questions tagged general-relativity black-holes hawking-radiation qft-in-curved-spacetime black-hole-thermodynamics or ask your own question.