Will the water go inside the moving water bottle?

Let's say that there is a empty bottle in the water moving at a high speed like this: 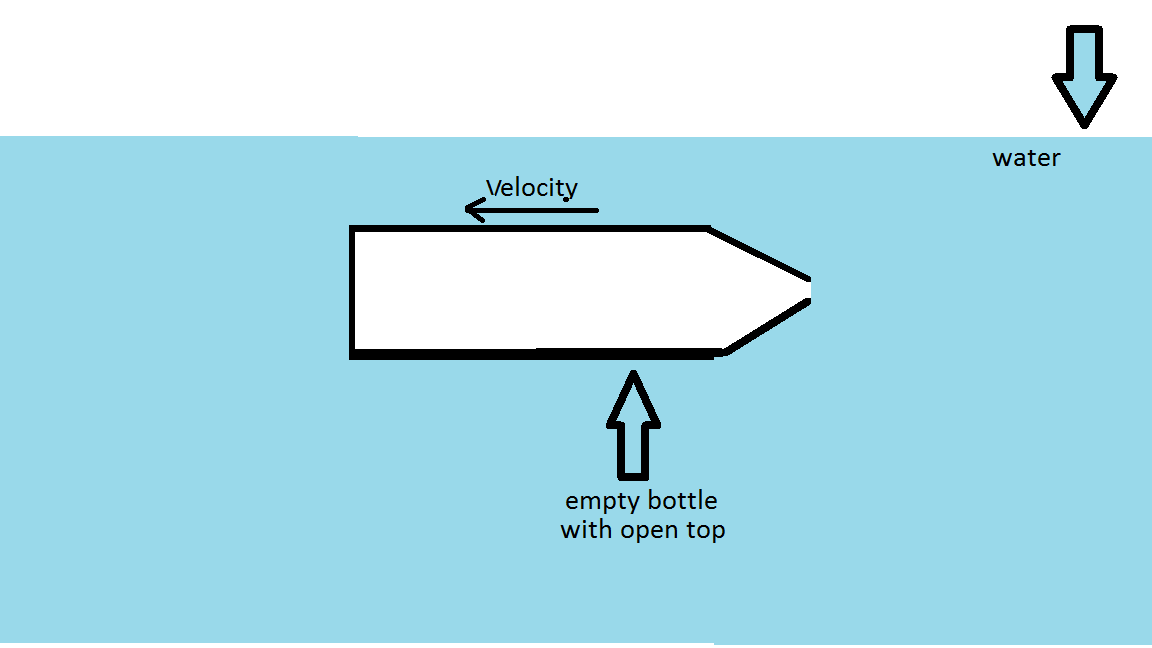 My question is: Will the water go inside the the empty bottle when the bottle is moving at a high speed? If yes, from what this speed is affected? and if this bottle is 1/2 full will its water come out? Thanks in advance.

The opening sees water at stagnation pressure. Water will flow in until the air in the bottle is squeezed to that pressure.

I'm appreciating your thinking and question.

Let us assume the the bottle is empty and moving from zero velocity to a constant velocity, because of relative motion between bottle and fluid ( here I'm considering air because compressibility of air is more than water, fluid will enter the bottle at the mass flow rate $$\dot{m} = c_d \rho A_{c} v_1$$ here $c_d$ is discharge coefficient depends on lid design of bottle.

$\rho, A_{c}$ and $v_1$ are density of fluid, cross sectional area normal to flow angle and relative Velocity of external fluid and bottle respectively. If there is a contraction then we should use continuity equation

here $_2$ is properties after diverging section and $_1$ is free steam properties.

This is valid till the flow touches the other end of bottle. After that this continuity equation is not valid because no mass flow rate outside of bottle. Then the velocity inside the bottle can be calculated from Bernoulli equation. please note that till I'm in incompressible region of flow and that velocity is calculated from,

One that fluid hit the end of the bottle, "hammer effect" (similar to "water hammer effect") will take place and one shock will move from end of bottle to lid of the bottle at about the speed of sound in incompressible region and more than that in compressible region. This shock will increase the pressure of the fluid inside the bottle and reduces the previous inflow velocity calculated from continuity. This shock also makes the velocity of fluid behind the shock, zero. Please refer the following link to get an idea how to calculate the flow properties in moving shock. This is a dynamic process, this shock will tell information to the upstream fluid that "there is a wall so we can't move". After the pressure inside the bottle reaches stagnation pressure every where (flow become quasi-steady state) the fluid layer at the lid of bottle act like a solid wall and it will not allow further new fluid elements to go into the bottle.

Will the fluid inside the bottle go out?

Method to verify this process

Not the answer you're looking for? Browse other questions tagged newtonian-mechanics classical-mechanics forces fluid-dynamics water or ask your own question.

5
Fluid Dynamics - Water Bottle Drink Mix: Air or No Air?
4
Physics of the inverted bottle dispenser
3
Water bottle moment of inertia
0
Pressure inside a plastic bottle filled with water and squeezed by X weight?
2
Calculate the amount of the water in a bottle
4
Is it easier to uncrush a water bottle full of air or water?
1
Water Bottle Condensation
1
Turn over a full bottle, why does it pour?