Is Dark Matter expected to be equally distributed in our solar system?

If dark matter winds up being roughly equally distributed in our solar system would this mean it has no net gravitational influence? Furthermore, do we expect dark matter to be less dense out in intergalactic space? Might this be because normal matter attracts it and gravitationally binds it?

Yes, massive objects would attract it more. However, because it essentially does not interact with matter except through gravity, it will pass through stars and planets without stopping. Note that unless there is a collision to transfer energy, an unbound particle cannot become bound to a single mass, since it has too much energy. It will simply move on a hyperbolic trajectory, leaving the star/planet at the same speed it approached.

Note that most of the gravitating mass in the universe is dark matter. If the Solar System had the same ratio of dark to normal matter as the universe at large, we would be dominated by it and there would be clear signs (e.g. the mass of the Earth would be nothing like the density of rock times its volume). Instead, we have a pretty typical dark matter density and an extremely high normal matter density (being on a planet close to a star is a very rare find if you randomly picked points in the universe).

See also this answer for further discussion and references.

Longer answer: The dark matter density is expected to be roughly uniform on the scale of the solar system, and to be around $10^{-22}$ kg/m$^3$. This is the mass equivalent of about 100,000 H atoms per cubic metre, but is actually around 100 times less than the density of normal matter in the interplanetary medium. Thus the gravitational influence of dark matter is also 100 times less than that of the interplanetary medium.

The reason it is expected to be relatively uniform is twofold. First, if it interacts at all with normal matter, other than gravitationally, it does so weakly. Second, we expect the dark matter to be orbiting the Galaxy, as the Sun does, with a speed of around 250 km/s, but because the dark matter is more spherically distributed than the stars, we expect this will not be co-orbiting with the Sun, but at random angles with respect to the solar motion. i.e. the relative speeds of the solar system with respect to the dark matter will be hundreds of km/s.

I think that what this means is that the gravitational perturbation of the dark matter distribution by planets, with low orbital speeds and escape velocities at their surfaces of a few to tens of km/s will be negligible. The Sun will act to gravitationally focus the dark matter, because the escape speed at the solar surface is 600 km/s. However, any dark matter attracted to the Sun will gain exactly the KE required to escape again, unless there are inelastic interactions with normal matter (some have proposed this could occur in the solar core). 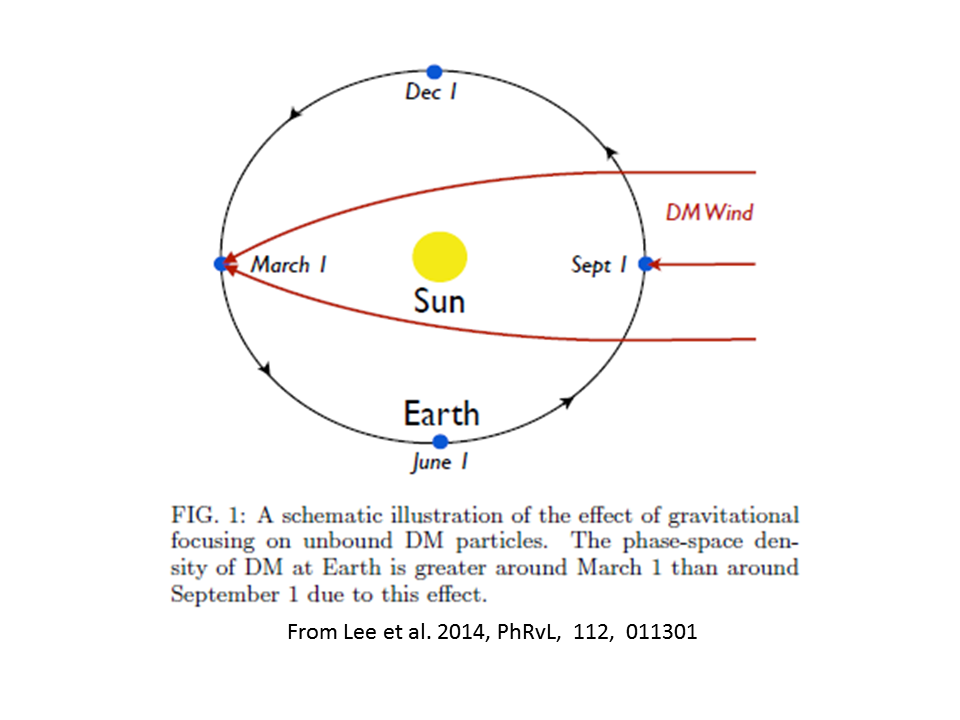 Lee et al. give an approximate argument for the size of the effect. If it takes a time $t \sim r_s/v$ for dark matter to cross the solar potential well (where $v \sim 250$ km/s is some mean speed), then during this time it is deflected by roughly $(GM_{\odot}/r_s^{2})t^2 \sim GM_{\odot}/v^2$. The deflection as a fraction of $r_s$ is then roughly $(v_{esc}/v)^2$, where $v_{esc}$ is the escape velocity at $r_s$, which for the Sun and $r_s \sim 1$ au is about 40 km/s. The focusing effect is parameterised in terms of a cross-sectional area, which is thus squeezed by a factor $(v_{esc}/v)^2$. Now conservation of mass tells us that $\rho A v$ is invariant in the solar frame, but $v$ does not change appreciably. Therefore the density increases by a similar factor $(v_{esc}/v)^2 \sim 2.5$ per cent. Lee et al.'s more careful modelling predicts a density modulation of 1.5 per cent.

Dark matter isn't equally distributed in places: it mostly lies within areas where galaxies exist. In a sense dark and light matter likes to clump together. Plus, it gathers in around together from it's own gravitational pull.

I also think it would be rather impossible for dark matter within our solar system to be uniformly distributed, partly because dark matter doesn't defy gravity: it would most likely be pulled around objects like the sun or Jupiter more than it would be around Earth or Mars.

Yes, dark matter seems to be less plentiful out in intergalactic space where there are no large clusters of stars such as galaxies or clusters etc, and in my opinion, it might be because of the normal matter and once it starts clumping into one point of space it attracts other dark matter as well.

On a cosmic scale, dark matter is not evenly distributed throughout the universe. It tends to attract normal matter toward it, so its distribution can be traced by observing the positions of galaxies and comparing their actual location with numerical simulations. Here is a photo showing how galaxies are found attracted along strands of dark matter: http://apod.nasa.gov/apod/ap011219.html.

Notice that each tiny circle is an entire galaxy. On the scale of our solar system, no such measurements have been made. However on a galactic scale, the density of dark matter has been measured, and it has been found to be more dense toward the center of galaxy clusters, and less dense toward the diffuse outskirts. Here is an account, which explains that the researchers used gravitational lensing of the largest objects in the universe, galactic clusters: http://scitechdaily.com/astronomers-measure-the-density-of-dark-matter-in-galaxy-clusters/

Is Dark Matter expected to be equally distributed in our solar system?

Not by relativists. Note Einstein saying this in The Foundation of the General Theory of Relativity: "the energy of the gravitational field shall act gravitatively in the same way as any other kind of energy". Gravitational field energy aka spatial or vacuum energy is dark. And it has a mass equivalence and a gravitational effect. So it qualifies as "dark matter".

If dark matter winds up being roughly equally distributed in our solar system would this mean it has no net gravitational influence?

Furthermore, do we expect dark matter to be less dense out in intergalactic space?

Yes we do. Because galaxies are gravitationally bound. Space expands between the galaxies but not within, and conservation of energy says the energy density has to go down.

Might this be because normal matter attracts it and gravitationally binds it?

Yes. But it's because of the expansion of the universe too. The expansion isn't uniform, and the result is inhomogeneous space. Which is what a gravitational field is.

Not the answer you're looking for? Browse other questions tagged dark-matter or ask your own question.

1
What is the correlation between dark matter and Einstein Rings?
12
If our galaxy's dark matter halo is so large and diffuse, why is the ordinary matter in it so much more localised and compactly located?