Will Gauss's law still hold in case of deviation from inverse square law?

Assume a spherical metallic shell over which a charge $Q$ is distributed uniformly.

Applying Gauss's law $\displaystyle\oint\textbf{E}\cdot d\textbf{a}=\frac{Q_{\text{enc.}}}{\epsilon_0}$ by considering a gaussian spherical surface concentric with the shell but with smaller radius, one can easily show that the electric field inside the shell is 0 since there is no enclosed charge within the gaussian surface.

What would change in the above analysis and result had the electrostatic interaction been different from the inverse square behavior (i.e., $1/r^{2+\epsilon}$ instead of $1/r^2$)?

As discussed in another question (and I see that Lubos has touched on this as well), Coulomb's law is considered to be a consequence of Gauss's law in 3D space. If physical conditions were to change such that it and Coulomb's law became inconsistent with each other, Gauss's law would continue to hold, and Coulomb's law is the one that would need to be modified. So any deviation of the exponent in Coulomb's law from $-2$ would probably be taken as an indication of something funky going on with the dimensionality of space, not that Gauss's law is broken.

But for educational purposes, you could calculate what would happen if we throw Gauss's law out the window, and then postulate that, despite being in 3D space, Coulomb's law has an exponent other than $-2$ on the radius for some bizarre reason. Wikipedia has an article on the shell theorem which includes a derivation that applies almost unchanged to this case. (They do it for gravity, so for our purposes, just mentally replace the masses $M,m$ with charges $Q,q$.) 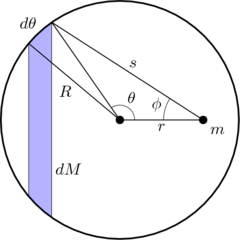 The charge within the shaded band is

Using the law of cosines you can calculate that

Substituting these into the expression for force and integrating gives you

which works out to 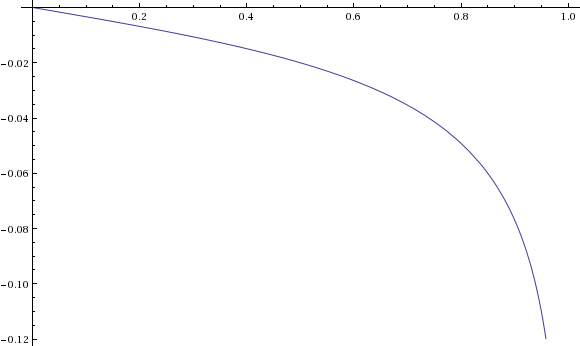 In particular, it's negative, so the force is inward, and it gets larger as you approach the edge of the sphere. If $\epsilon > 0$, the force would be outward instead of inward, but other than being reflected over the x-axis the graph would be qualitatively similar.

If $\epsilon = -1$, then you have to do the integral a little differently because you're integrating $1/s$. You would then wind up with

although the graph is still not qualitatively different; it's still positive and increases as you move away from the center of the sphere.

79
Does Coulomb's Law, with Gauss's Law, imply the existence of only three spatial dimensions?

2
Is it reasonable to have a discontinuity on the surface charge density?
9
Deriving Coulomb's Law from Gauss's Law
0
Decreasing energy but at expanse of what
0
Gauss's law and electric field inside spheres and shells
0
Concentric Conducting Spheres and Gauss's Law
3
Faraday's law for a 3-dimensional conductor plate moving in a uniform magnetic field
0
Determining the behavior of the electric field due to a sphere of charge inside a conducting shell
0
Electrostatic request about forces of dielectric