A simple derivation of the Centripetal Acceleration Formula?

Could someone show me a simple and intuitive derivation of the Centripetal Acceleration Formula $a=v^2/r$, preferably one that does not involve calculus or advanced trigonometry?

Imagine a object steadily traversing a circle of radius $r$ centered on the origin. It's position can be represented by a vector of constant length that changes angle. The total distance covered in one cycle is $2\pi r$. This is also the accumulated amount by which position has changed..

Now consider the velocity vector of this object: it can also be represented by a vector of constant length that steadily changes direction. This vector has length $v$, so the accumulated change in velocity is $2 \pi v$.

Aside: that derivation is used in a lot of algebra/trig based textbooks. 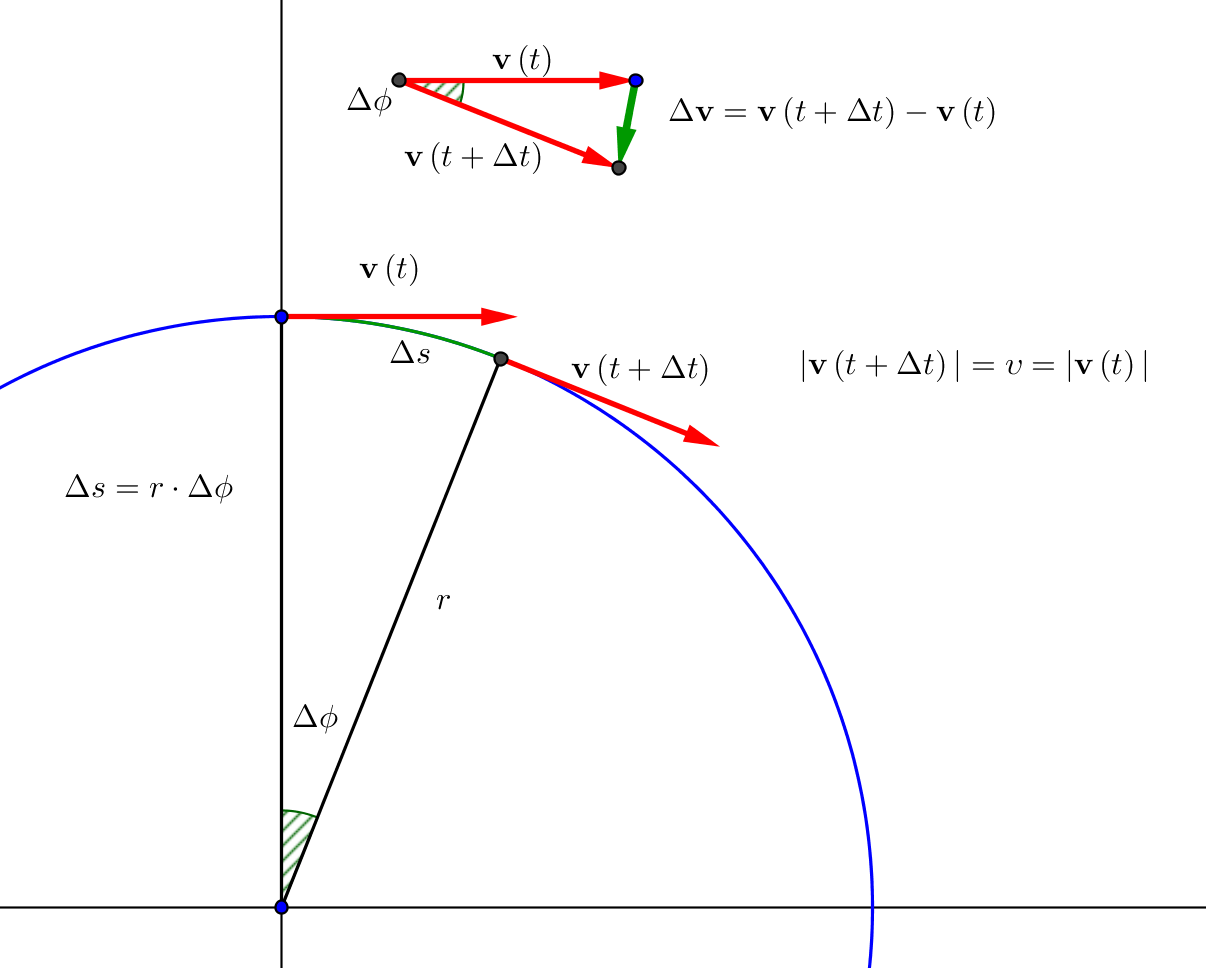 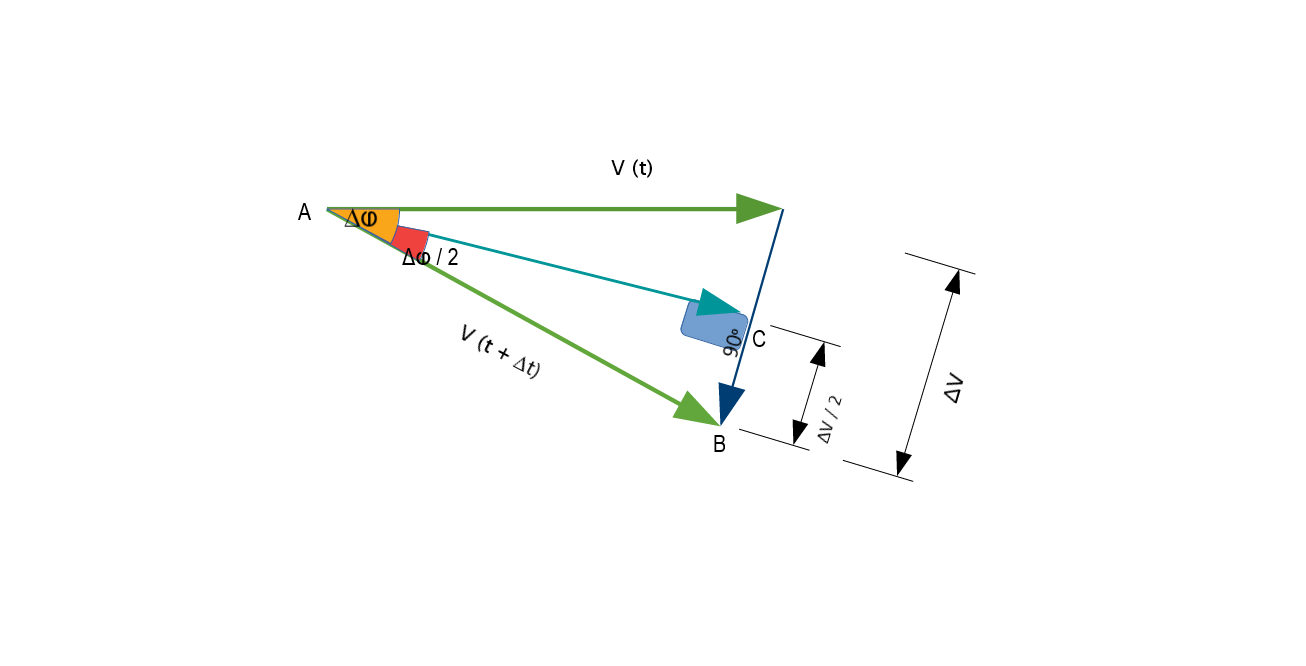 You can do this derivation by breaking the position of the orbiting particle down into components. It isn't short, but I think it's useful because it supplements the algebra with concrete physical analogies. I'll organize it into four parts: decomposition, oscillation, energy, and symmetry.

The position of a particle moving along a circular path can be described by two half-out-of-phase sine waves -- or equivalently, a sine wave and a cosine wave:

It turns out that there's another kind of movement that's described by sine waves: the oscillation of a weight on a spring. In such a system,

where $A$ is the amplitude (i.e. the difference between the spring's maximum length and its resting length), $k$ is the spring's force constant, from Hooke's law, and $m$ is, of course, the mass. Deriving this equation in the usual way requires not only calculus, but also differential equations -- so I'm going to ask you to take my word for it until a bit later.

For our purposes, this means that the mechanics of the orbiting particle can be simulated by two oscillating springs: one for the $x$ component, and one for the $y$ component that is identical to the first, but that is half-out-of-phase with it. To picture what this looks like, look back at the animation above, and pretend the blue dot and the red dot are attached to springs that are at $0$ when resting.

Now that we have this spring-based model, we can use it to determine the force being applied to the particle along the $x$ axis! By Hooke's law, the force a spring exerts on an attached weight is $F = -kx$. Let's try to use that formula to determine the acceleration of the particle when the $x$ spring is at its maximum length. We know its maximum length will be $r$ in this case -- this corresponds to the moment when the particle is at $x = r, y = 0$. And we know that $F = ma$. So by substitution, $ma = -kr$; divide by $m$, and

Our work is half done. But now we have a new problem: we don't know what $k$ is -- after all, there's no actual spring, so we can't measure anything. We need to know what value of $k$ a spring will have if it moves the same way as the particle does along the $x$ axis. To solve this problem, we have to start thinking about conservation laws.

Here's what's happening: the energy in the system is moving back and forth between maximum kinetic energy (at $x = 0$ when the spring is not stretched or compressed at all) and maximum potential energy (at $x = r$, when the spring is fully stretched). And because of conservation of energy, these two maxima must be equal; in other words, $E_\text{max}$ = $P_\text{max}$.

In general, this would mean we have to do calculus. But luckily enough, $F = -kx$ is a linear function, and so the value we want is equal to the area of the triangle formed by the $x$ axis and the line $F = -kx$: 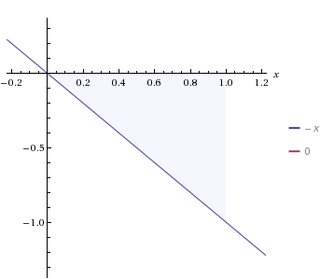 And since potential energy is equal to negative work:

Isn't it interesting how similar that is to $E = \frac{1}{2} mv^2$? If you think about that for a while, and consider that $E + P$ has to be a constant value, you might start to realize why an oscillating spring follows a sinusoidal path! (Hint: write the formula for a circle, but use $\sqrt{E + P}$ instead of $r$, and $v$ instead of $y$.)

What happens when we solve for $k$?

Now we can substitute that into our formula for acceleration above:

The last step of this derivation requires a trick. We began by breaking movement in two dimensions into movement along two one-dimensional components. We then used imaginary springs to describe the particle's movement along those two components. And now, we face a final question: how do we pick our $x$ and $y$ components?

They have to be at right angles to one another, but that's only half the battle -- we have to find the "right place" to start, the "real" $x$ coordinate. The trouble is that we can't. The circular path along which the particle moves is rotationally symmetrical. There's nothing about the circle to tell us where it "starts" or "ends."

This means that the above line of reasoning holds no matter where we start. We can pick any point on the circle as the $x=1, y=0$ point, and the above will be valid. So wherever the particle is, we simply set that point as our $x = r, y = 0$ point, and everything else falls into place.

If we wanted to make more work for ourselves, we could work out the details trigonometrically, using the above formulas, adjusting them for the $y$ axis, and then recombining the $x$ and $y$ values using vector algebra. But we don't need to -- the symmetry argument is more powerful in this case.

2. Making sense of the signs takes a lot of subtle detail work; in particular, you have to understand why negative work becomes positive potential energy. It also helps to think about $r$ as a vector (which has a direction) instead of a magnitude (which doesn't). Fortunately, physical intuition provides a reliable guide in this case; if something turns out obviously wrong, double-check your thinking.

In order to move through a concave path, an agent has to impart force to otherwise a linearly-moving object. The object , by virtue of its motion, under the absence of any external force, always travels or tends to travel in the direction of the velocity vector at the concerned instant.

So, when the object has to transverse a curve trajectory, the main requisite is the introduction of a force that manipulates the direction of velocity such that the resultant locus is the required curvilinear path, otherwise the object would travel straight.

Share
Improve this answer
edited Jun 2 '16 at 5:07
answered Jul 12 '15 at 5:07
user36790user36790
$\endgroup$
Add a comment  |
Highly active question. Earn 10 reputation (not counting the association bonus) in order to answer this question. The reputation requirement helps protect this question from spam and non-answer activity.

Not the answer you're looking for? Browse other questions tagged homework-and-exercises newtonian-mechanics acceleration rotational-kinematics or ask your own question.

13
What would qualify as a deceleration rather than an acceleration if speed is unchanged?
17
Conceptually, what is negative work?
2
Normal force on vertical circular motion
2
Why is the centripetal acceleration direction only correct for small velocity differences?
0
Is there any easy way to derive acceleration in a circular motion without involving derivatives?