Method of calculating eddy currents of a conductor, is this correct?

I have a conductor with volume $V$, passing a magnetic field($B$) with velocity($v$): 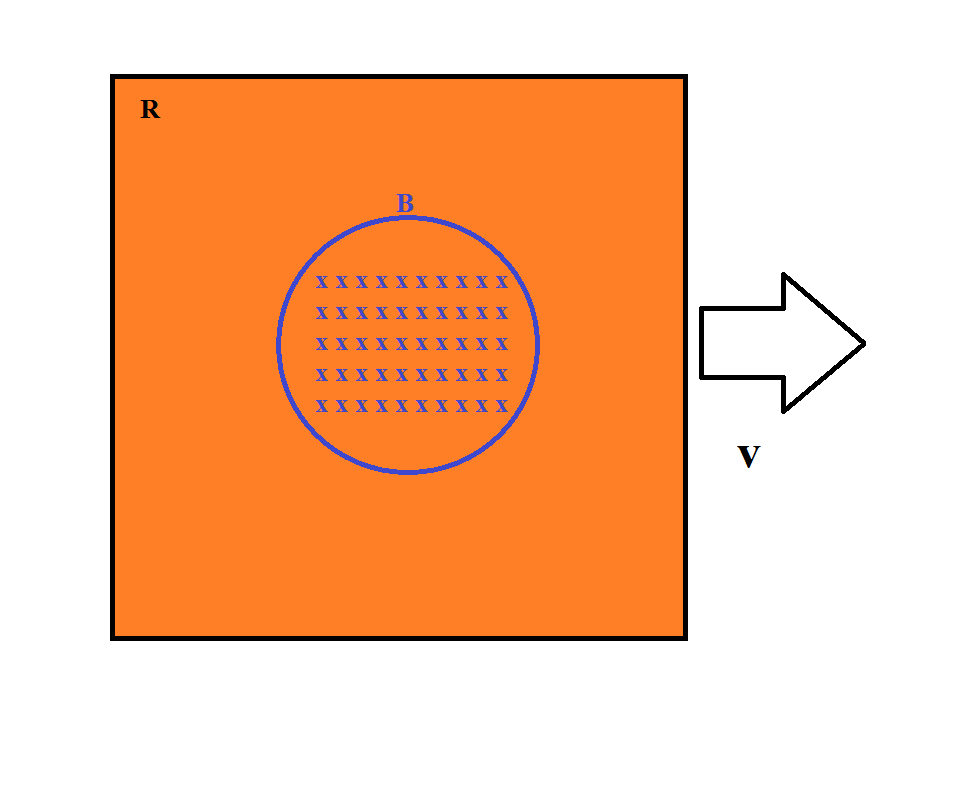 I'm trying to calculate the Eddy currents to figure out the magnitude of the drag force($F_d$) generated the Eddy's, how can that be done? 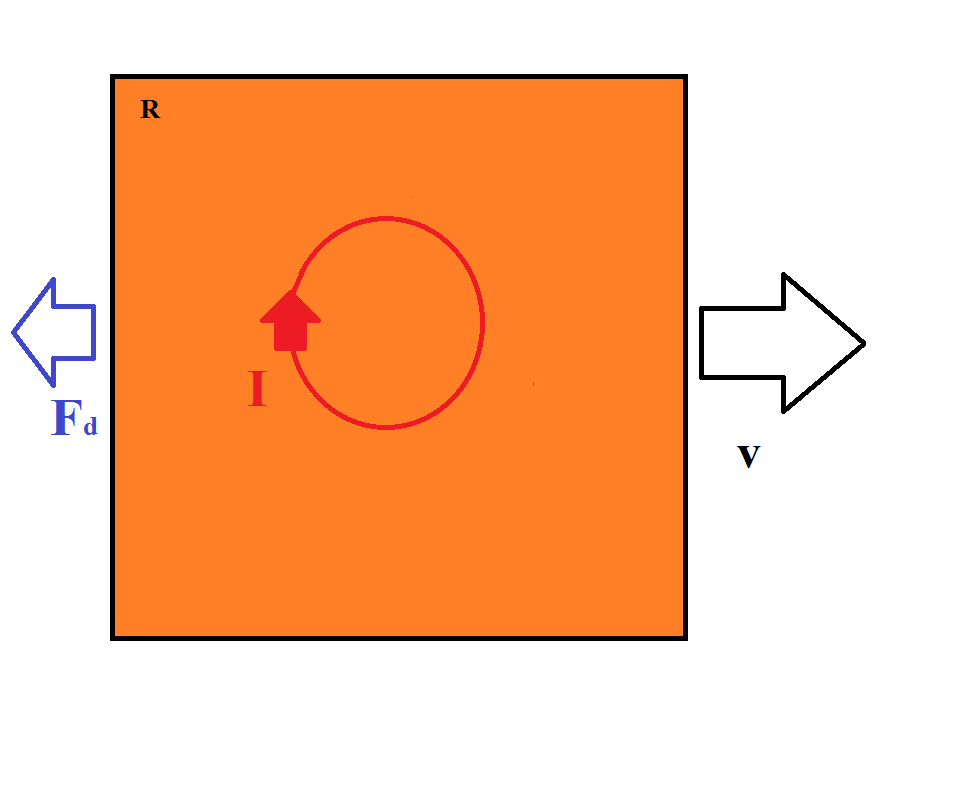 I could not find a direct formula, I noticed from a lot of sources that it seems to be a difficult task.

The conductor is in an open circuit(I don't think it makes a difference if it was in a closed circuit). Please let me know of any additional information I'm missing(not sure of all the required variables). I'll add them as an edit.

It's a complicated subject - but very well studied in the context of eddy current brakes, where the retarding force is used to create a braking force without mechanical friction / wear. For me, the starting point for finding out more was this post - in particular the posting by Jim Hardy contained lots of good links.

It seems that some of the most significant analyses were done by Smythe (1942), Schiber (1974) and Wouterse (1992) - see this thesis chapter for lots of detail.

Just summarizing, it seems there are four significant factors (surprise). These are

This means that for low speed, the force is expressed as

where $v$ is the velocity, $B$ the magnetic field, $A$ the area of the magnetic patch, $\rho$ the volume resistivity and $t$ the thickness of the plate (area resistivity $\sigma = \rho / t$). Note that I modified the equation given in the reference slightly - it was showing the torque for a rotating disk, from which I deduced the force ($F = \frac{\Gamma}{R}$)

Now when the speed becomes higher, the induced currents can generate a field that is a significant fraction of the applied field; and as I mentioned, the skin effect can start to play. Both of these will generate additional term in the relationship between force and velocity, but at this point the calculations become tricky to do analytically and are typically done by fitting experimental data.

But the above should give us a start. It tells us that thicker conductors experience greater force, and that as things move faster, the force will increase. There is a lovely experiment demonstrating eddy currents in which a strong magnet is dropped down a thick copper tube, and appears almost to float: this observation is entirely consistent with the above equation (you need thick copper to get sufficient induction; and since the force increases with velocity there will be a velocity at which the retarding force cancels gravity).

A video showing this phenomenon is shown here - incidentally it shows that the effect is stronger for the copper tube than for the aluminum tube, as is consistent with the fact that the volume conductivity of copper is greater than that of aluminum (by about 1.5x).

I can give a back-of-the-envelope derivation of a drag force that ignores fringe effects and other complications. Say the conductor is a plate of thickness $\Delta z$ traveling with velocity $v$ in the x direction. Take the magnetic field to be constant in a rectangular area, with the the $\Delta y$ side perpendicular to the velocity much longer than $\Delta x$ side.

The induced electric field will circulate around the leading and trailing edges of the rectangle in opposite directions. See the image from Wikipedia, and notice how the current (proportional to the field) is stronger in the middle and is pointing perpendicular to the velocity. 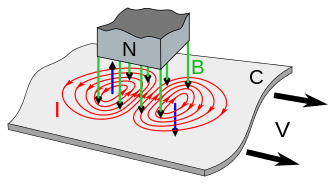 As the $\Delta y$ length of the rectangle becomes longer only the y directed field in the middle is significant (just like a long solenoid).

In general I'd imagine there would be a coefficient out front which depends on more detailed geometry. For comparison there is a power dissipation formula here with some different numerical factors out front and using frequency instead of velocity, but the same form.

Then you can integrate $\sigma \lvert E\rvert^2$ find the power dissipated and then the force as above.

To calculate the current I think the approach would be as follows.

To make things simple lets say that the body is moving at a constant velocity, i.e. $F_d$ is just so that it overcomes the resisting force keeping the body moving at velocity $u$.

I don't have the expertise you're looking for, but here's a crack at it:

However, there's a standard high-school physics experiment where sending a plate of metal through a magnetic field significantly slows it down (because of the large eddy currents), but sending the same plate of metal with lots of little notches cut out reduces the effect.

The fact that cutting notches out of the plate can have an effect at all means that typically the eddies are large, on the order of the size of the plate. That means that DanielSank's answer should be roughly, order-of-magnitude correct.

I think some of the earlier answers have covered a lot of the math but to make sure you see how complex it is to calculate it, remember that as the distance from the conductor increases the flux density decreases - nonlinearly. Frequently it is approximated by the inverse square rule but that is only for a specific geometry. It is definitely not close to an inverse square law for a lot of magnet geometries such as thin magnets. For example we just did the measurements on a 1 inch square x 0.5 inch thick N50 neodymium magnet and at the surface it measures 4,800 gauss but at 0.25 inches it is 2,500 gauss and at 0.5 inches it is 1,200. For the inverse square law it should have been 1/4 not 1/2. Furthermore, on a permanent magnet, the flux varies dramatically over the surface and the angle of the flux varies dramatically. For a 1 inch square x 2 mm thick neo N40 magnet, it can measure 1,000 gauss in the center and 2,300 gauss on the corners. When you look at the angle of the flux on the edges where it is the strongest, they are nearly parallel to the surface whereas the vectors in the center will be perpendicular. As magnet thickness increases this effect is decreased and a 1 inch cube will have a more uniform profile across the surface.

It is easy to write the equation that says to integrate the total flux in the volumetric space above the magnet and its interaction with the entire volume of the conducting material, but it is quite difficult to do this and account for the variations.

To complicate the matter even more, as your velocity increases the induced eddy currents increase and as the magnetic flux increases in the conducting material it will require greater work to induce the next amount of flux because the resistance is increasing in the material.

Even though this will still not cover everything as the flux is moving away from the surface of the magnet it is changing in flux density and angle so that as you move into thicker materials such as aluminum or copper each increment of thickness produces fewer eddy currents. For example, going from 0.25 inch thick copper to 0.5 inch thick copper will definitely increase the drag but nowhere near doubling the force. It will depend on the magnet. For a 2 inch N52 cube magnet increasing from 0.25 inch thick to 0.5 inch thick will probably increase the drag around 80% but taking a 1 inch square x 0.25 inch thick N50 magnet it may only get a 40-50% increase in drag effect.

Now, while calculating it can be extremely tedious even if you have some of the better magnetic modeling software packages you will find that building a model and measuring the force will be much easier. That way you can use exactly what you want in your own application and see what results you get. At SuperMagnetMan, that is what we recommend for most people because they can easily understand the results they get from a test but they will not know the limits of the software and if it accounted for everything. We get magnet designs modeled all the time for our customers and they are usually close to correct but never have they been dead on. I always try to build a scale model of what we need and send in real data to the modeler so they can see how close the model is to reality. Then they can adjust parameters until the model matches reality and then scale up the model and the data is usually pretty accurate with that approach.

Not the answer you're looking for? Browse other questions tagged electromagnetism classical-mechanics classical-electrodynamics or ask your own question.

1
Disc Eddy current brake Torque calculation
21
Can we stop moving bullets by Eddy currents?
3
Eddy currents Vs. Inducing EMF in opposing the change?
2
Should a Bismuth coin slide slowly down a magnetic ramp?
0
Torque on a rotating sphere in a uniform magnetic field
1
What is the retarding force due to eddy currents
0
volume resistivity