Why are band maxima / minima often (always?) at high-symmetry points?

(inspired by this question.)

In every semiconductor that I can think of, the valence band maximum and conduction band minimum are at a high-symmetry point in the Brillouin Zone (BZ). Often the BZ center, or a corner, etc. In silicon, the CBM is not at any of those points, but it is on the straight-line path between the Gamma and X point, so it still has higher symmetry than an arbitrary point in the BZ.

Why does that typically happen? Does it always happen, or are there any exceptions where a band extremum (any band, not just valence or conduction) occurs at a point in the BZ with the lowest-possible symmetry? (So that there are as many copies of the extremum as there are elements of the point group ... or something like that.)

Suppose you have a Hamiltonian $H$ which depends on a parameter $\lambda$, and suppose for a particular value $\lambda_0$, $H$ has a symmetry and therefore a degeneracy. This is illustrated by the dotted lines in the diagram which show the energies of the states $\ket{\Psi}$ and $S\ket{\Psi}$ as functions of $\lambda$; they cross at $\lambda_0$. If there is another term $V$ in the Hamiltonian which is not symmetric under $S$, then the degeneracy disappears and the energies for $\ket{\Psi}$ and $\ket{\Psi'}$ do not cross. This famous "avoided level crossing" is indicated by the solid lines in the figure.$^{[a]}$ Calculation of the gap in the avoided level crossing is a standard problem in Hamiltonian mechanics and can be done using perturbation theory considering the two levels involved in the crossing. 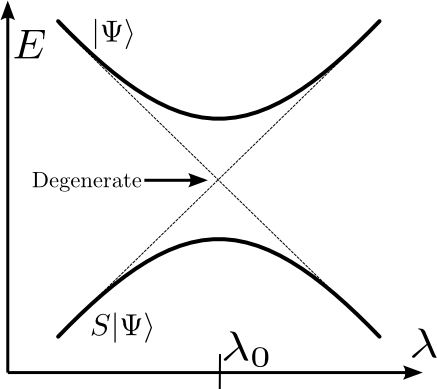 The Hamiltonian for an electron in a crystal has three parts: kinetic energy, potential energy, and electron-electron coupling. Let's forget about electron-electron interactions entirely, and assume that the potential energy from the crystal is weak compared to the electron kinetic energies. In this case, we can treat the kinetic energy as the strong part $H$ and the potential energy as the weak part $V$ of the Hamiltonian. It turns out that if you compute the kinetic energies of the electron in a periodic lattice as a function of crystal momentum $\vec{k}$ there is degeneracy wherever $\vec{k}$ hits a Bragg plane. Thinking now of $\vec{k}$ playing the role of $\lambda$, we have an energy crossing when the crystal momentum hits a Bragg plane.

When we add in the potential energy of the lattice, it plays the role of $V$ and splits the degeneracy, producing what we call a band gap.

An example of a system with band minima away from symmetry points are perhaps a little bit esoteric, like topological insulators, two-dimensional electron gases, ... In this case the spin-orbit coupling is responsible of the "splitting" of the band minimum in two points which are connected via chiral symmetry. (Reference: Spin-orbit coupling in quantum gases, look at figure 1)

Excluding accidental degeneracies, there are only two cases:

2) There are many band maxima, which are connected one to the other via a symmetry transformation $\Pi_i^n$ of the symmetry group.

Therefore, there can be cases where there are several points which are band maxima (or minima) and are not at one of the high-symmetry points of the BZ. In this case these points are all connected by a symmetry operation. One can consider however the irreducible BZ, which is the first Brillouin zone reduced by all of the symmetries in the point group of the lattice. Since all maxima are connected by a symmetry operation, there can be only one band maximum (or minimum) in the irreducible BZ.

EDIT: However, it is often the case that the band structure shows the band minimum at the center of the BZ. This can be explained by the simple fact that in a wide range of materials, like metals, semiconductors, and conventional insulators, the band structure is well described in the nearly free electron approximation. In these materials, the Coulomb repulsion between electrons and other kind of interactions can be neglected, and one is left with a simpler Hamiltonian which contains only interactions between the electrons and the lattice $$ H =-\frac{\hbar^2}{2m}\nabla^2+\lambda V(\mathbf{r}), $$ where the first term is the kinetic energy of electrons and $V(\mathbf{r})$ is the Coulomb attraction between the electrons and the ion lattice. The energy levels can be written in this case as $$ E_k = \frac{\hbar^2 k^2}{2 m} + O(\lambda) $$ where $O(\lambda)<0$ is the correction to the kinetic term due to the electron-lattice interaction. This term is negative, since the energy of electron-lattice system is lower than the energy of a system made only by electrons in vacuum. If the correction is small, and the kinetic term is the leading order in energy, one has the well known parabolic dispersion $E\propto k^2$ which is a good approximation near the center of the BZ $k=0$, which is also the minimum in energy. Therefore, as long as the nearly-free electron approximation holds, and the electron-ion interaction is small, the band minimum is at the center of the BZ. A semiclassical interpretation of this result is that the energy is at its minimum when electrons do not move ($\mathbf{k}=0$).

This results also holds if one takes into account a finite electron-ion interaction (the correction term $O(\lambda)$), at least in materials with high-symmetry (e.g., cubic lattice). In this case, the electron dispersion is modified and it is proportional to the cosines of the momentum $\mathbf{k}$ components (e.g., in the tight-binding approach).

In the case of strongly correlated systems (e.g., Mott insulators) or in systems where the spin-orbit coupling is relevant (topological insulators, heavy elements with partially-filled $f$-shells) the nearly free electron approximation fails and the band minimum may be no longer at the center of the BZ. The most studied counterexamples of a band structure where the band minimum is away from the BZ enter are topological insulators.

If the band extrema occur at non-symmetric points in the Brillouin zone (necessarily multiple, since they must be related by the space symmetry group), then at the metal-band-insulator transition the conduction electrons will have incommensurate momenta and their wave functions will only be quasiperiodic. This is unusual, but it does occasionally occur. It's a mathematically similar phenomenon to quasicrystals.

Not the answer you're looking for? Browse other questions tagged condensed-matter group-theory semiconductor-physics electronic-band-theory or ask your own question.

4
Why are bandstructures plotted only along certain symmetry points?
2
Is there some connection between Band gaps and avoided crossings?