Has a double slit experiment ever been done using a track chamber or even contemplated?

I tried searches and the question has been posed in other fora, but no experiment came up.

Track chambers (cloud chambers, bubble chambers , time projection chambers, solid state detectors like the vertex detectors at LHC) give the track of the particle as it ionizes the medium, and could be carried out in geometry after the particle has passed the double slit. The straight track should be pointing back to the slit it came from and its record could be used as the points on the screen in the classical double slit experiment.

The set up as I see it would be the classical setup for single electron through the double slits but instead of a "screen" one has a detector and detects the track. It should be a long enough detector to get an accuracy less than the slit difference so it could point back to the slit, as the interslit distance is of the order of 100 microns and detectors are giving order of microns accuracies.

An expert's opinion is necessary whether the experiment is possible, whether the energies of the electrons to show interference with a specific d separation is enough to create an accurate track in a solid state detector. If not a cloud chamber would do , but again the energy of the electron would be important because it would have to pass the barrier air/chamber.

It could succeed if the double slits were within a cloud/ bubble chamber; the beam count was low (10 to twelve per picture) but it was spread in the vertical direction. If the beam could be focused on the slits , it should be doable.

I'd like to expand my earlier comment into a little essay on the severe practical difficulties in performing the suggested experiment.

I'm going to start my asserting that we don't care if the experiment is a "two-slit" per se. It is sufficient that it is a diffractive scattering experiment of some kind.

However, we do care about having

Now let's get down to designing the beast.

To start with we should note to any casual readers that the diagrams you see in pop-sci treatment are not even remotely to scale: typical classroom demonstration kit for use with lasers has the slits set less than $1\,\mathrm{mm}$ apart and uses projection distances of several meters or more to get fringes that are separated by a few centimeters. Or then use much closer set slits to get large angles.

Anna has suggested doing the experiment with electrons, which means that we're interested in the de Broglie wavelength usually given by $\lambda = \hbar/p$, and measuring their position en route with a tracking detector of some kind.

The tracking detector's spacial resolution is going to be the big barrier here.

Let's start by considering a Liquid Argon TPC because it is a hot technology just now. Spacial resolution down to about $1 \,\mathrm{mm}$ should be achievable without any breakthrough in technology (typical devices have $3$-$5\,\mathrm{mm}$ resolution). That sets our value for $d$.

Now, to observe a interferences pattern, we need a detector resolution at least four times finer than the spacial resolution.

I'm sure you can get better spacial resolution in silicon, but I don't think you can get the beam energy up high enough to pass a great enough distance through the tracking medium to actually make the measurement.

The fundamental problem here is the tension between the desire to track the electron on it's route which forces you to use nearly human scales for parts of the detector and the presence of that pesky $\hbar$ in the numerator of equation (1) which is driving the necessary beam momentum down.

The usual method of getting diffractive effects is just to make $d$ small and $\ell$ large enough to compensate for the $\hbar$ but our desire to track the particles works against us there by putting a floor on our attemtps to shrink $d$ and by because longer flight paths mean more sensitivity to scattering by the tracking medium.

The interference pattern comes from the calculated wavefunction phase difference at a specific position of the detector. Every interaction of a particle along its paths (whether they are real/collapsed or virtual/calculated) would randomly bring a phase difference to the calculated wavefunction, therefore its coherence would be quickly destroyed as the particle propagates further through the chamber. But, it seems that another effect is by far more dominant in this case.

In order to observe interference patterns up to a micrometer range at the detector, one has to use slow, non-relativistic particles. E.g. the speed of an electron to have its associated de Broglie wavelength of $1\ \mu m$ has to be

The kinetic energy of such a highly non-relativistic electron is

which is way below the energy of an interaction with a particle in the chamber (let's say $1\ meV$), so the electron will behave like a billiard ball (i.e. classically) in this interaction completely changing its direction, not to mention its wavefunction phase before finally reaching the detector. This reasoning holds even if we extended the resolution of the detector to $10\ nm$, when the electron speed and kinetic energy are $100$ and $10\ 000$ times higher, respectively.

Remark: this is an answer from a graduate hobbyist, not an expert.

On January 24th, 2013 Mike W. (with help from Lee H) from the University of Illinois at Urbana-Champaign performed a thought experiment in which they sent a particle through a double slit in a bubble chamber. When the bubbles were smaller than the slit, no interference pattern occurred. For closer slits and larger bubbles, the results were inconclusive. 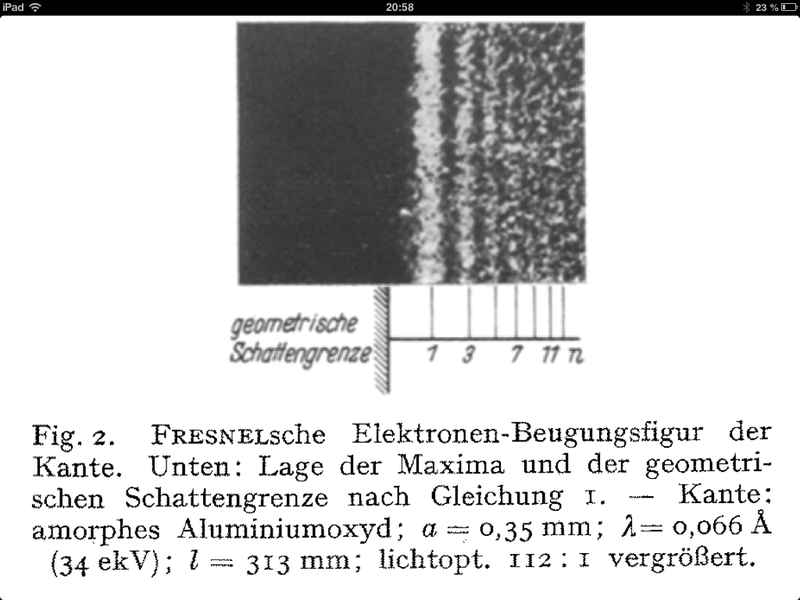 I wrote about electron diffraction in this non published paper (German)Since for electron beam welding we need a vacuum to prevent the dissipation of the beam, it seems not very practicable to get results in a bubble chamber.

As the comments have stated, you cannot do this experiment, because (1) the particle is wavelike when passing thru the slits, and (2) the cloud path only happens because a particle's wavefunc "collapses" the moment it interacts with the junk in the cloud chamber that causes the path to appear in the first place.

You might as well ask how to measure the position of an electron as it leaves a quantum well and passes through a forbidden zone, only to reappear on the other side. See "Quantum Tunneling."

There's various pictures on the internet of the double-slit experiment with electrons. Some of them are badly misleading because they show the electrons passing through the slits as dots. They aren't dots, because the electron's field is what it is. It's quantum field theory, not quantum point-particle theory. And that field doesn't stop one micron from the centre of the electron, any more than a hurricane stops one kilometre from the centre of the eye. Do not think the electron is pointlike because you see a dot on the screen. Do not think a hurricane is pointlike because you can only see the eye.

So, what would we see if we combined the double-slit experiment with a cloud chamber? IMHO one should think of the front of the cloud chamber as the screen. You see dots. Each dot extends backwards as a track. And these tracks point towards the source. Not to one slit or the other, because the electron went through both slits. Something like this:

If however you put a detector at one of the slits, I predict that you would find that the tracks no longer point towards the source, but instead point towards that slit. I say this because IMHO the act of detection performs something akin to an optical Fourier transform on the electron, and converts it into something pointlike which goes through that slit only.

But of course, the proof is in the pudding. I'd like to see this experiment done.

1
Projecting double slit onto fog instead of screen
12
Does quantum mechanics imply that particles have no trajectories?
8
Double-slit experiment: Difference between observing photon path and interference pattern?
2
A follow up on "Double Slit Experiment in a Bubble Chamber"
0
Is it possible to plot a quantum particle's position with respect to time?
1
Using tracking detector in a double slit experiment, what would we see?