Why do electrons occupy in discrete energy states?

Why can't there be any continuous energy band in an atom?

Steady-state Schrodinger's equation is given by: $$\dfrac{\partial^2 \psi}{\partial x^2} + \dfrac{2m}{\hbar^2} (E - U)\psi = 0$$. In order to solve the equation, "boundary conditions" will have to be satisfy which restrict the values of $E$ which only do satisfy the equation. This is more evident in this form of equation $\hat{H} \psi_n = E_n \psi_n$ . For every hard $\psi$, there must be a corresponding eigenvalues of energy. Thus there are only certain energy states which is valid for certain "boundary conditions$^1$".

$^1$ Let you take the famous particle in a box problem.

An electron in an atom is in a bound state. Since it is a bounded particle, can analyse the problem with particle in a one dimensional potential box. Consider a one-dimensional crystal lattice with lattice constant $L$. We assume that the particle is free to move within this distance and cannot go outside. So we have two potential barriers that tend to infinity at the points $x=0$ and $x=L$ as shown in the figure. This infinite potential is to mention that the electron is well confined in that region and cannot go outside. 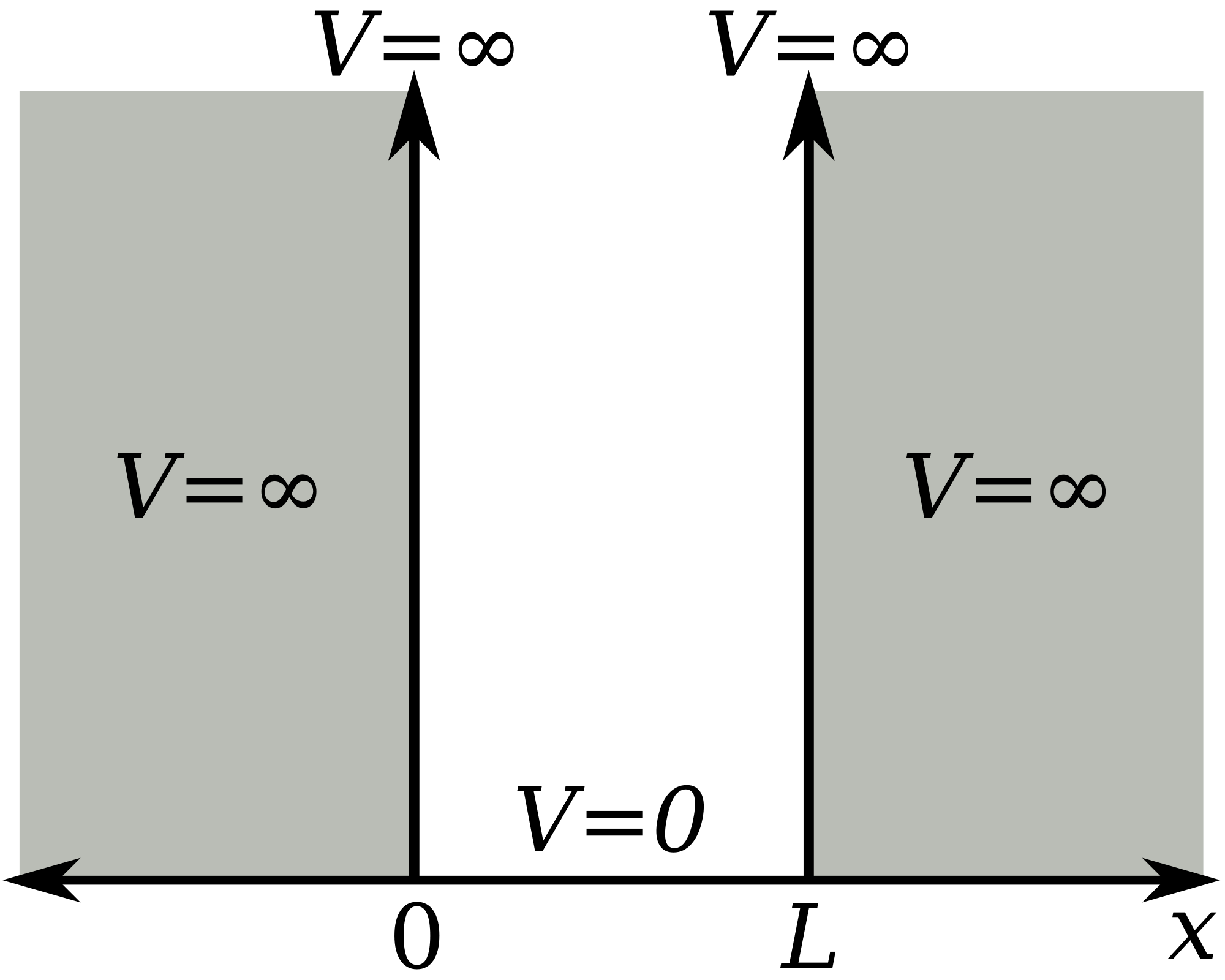 Now, we define the wave function of an electron as a function of distance $\psi(x)$. Then, the Schrodinger's equation can be written as

We assume the general solution be of the form :

where $A$ and $B$ are arbitrary constants, to be determined from the boundary conditions.

Now, we are going to apply the boundary conditions:

Also, it is to be noted that the propagation constant is having integral values corresponding to different values of $n$. Hence the wave function also have integral values given by

Our electron is well confined within the region $0<x<a$. Hence the probability of finding an electron in this region is 1. This is called normalizing the wave function, which will give us the value of $A$.

On integration, we get

So the normalized wave function becomes

Now, using this value and substituting it in the Schrodinger equation yields us the value of the energy of the electron corresponding to the wave function $\psi_n(x)$.

The lowest energy level possible is

From the above equation of energy it is clear that

This means the spacing between two consecutive energy levels increases as

So, as classical mechanics says, there can't be continuous range of energy levels or bands. However, if the particle becomes heavier and the length of the crystal is very large, the energy levels will be spaced very close together and eventually may become continuous. for example, if $L=1cm$, then

Why can't there be any continuous energy band in an atom?

This is the basic reason quantum mechanics had to be invented.

Once the existence of positive and negative charges was discovered, Maxwell's equations when solved for a planetary model of a central positive charge and an orbiting negative one, are completely unstable, in contrast to the gravitational problem. This is due to the fact that accelerated charges radiate electromagnetic radiation and lose energy. An orbiting electron in the field of a nucleus will continually radiate energy and fall on the nucleus as far as a classical model goes.

This means that atoms would be a soup of positive and negative charges and when an electron fell on an ion, a continuous spectrum would be observed.

This is not what was observed. Hydrogen atoms had a distinct electromagnetic spectrum, made up of lines that could be mathematically fitted very well by the Balmer and Lyman series.

That is why the Bohr model, a planetary model of the hydrogen atom was proposed, which forced stable, quantized, orbits and could derive the series appearing experimentally.

After that came the Schrodinger equation and quantum mechanics, which gave a theoretical model that describes nature in the microcosm, and is the underlying level of all classical theories.

Not the answer you're looking for? Browse other questions tagged quantum-mechanics energy atomic-physics eigenvalue discrete or ask your own question.

33
Reason for the discreteness arising in quantum mechanics?
20
Discreteness of set of energy eigenvalues
3
Is the fact that sound travels faster in metal than in water related to the fact that hitting metal is louder than hitting water?