What is the most efficient Organic Photovoltaic solar cell?

Preferably one that is researched in a paper, not necessarily in production.

I have found various claims of OPVs with an efficiency of 10%, 8% and 7.3%, the only one I can substantiate is referenced in a paper in Advanced Materials (Volume 22, Issue 34 pp 3839–3856) to Solarmer but the web reference there leads to a news page where the news have been removed.

Developments as of summer 2014

The hottest kid on the organic-PV block is perovskites: in February 2012, Hardin, Snaith & McGehee published an article in Nature Photonics announcing "The renaissance of dye-sensitized solar cells". The inventors of one implementation, Oxford Photovoltaics Ltd (a spinoff of the University of Oxford) described their new technology in Science, in November 2012, and have a patent application pending for their dye-sensitized solar cell. For more, see recent papers by Henry J. Snaith's team. Folk have got excited because of the rapid increases in efficiency since 2009, combined with the very low cost and abundance of the raw material: as of summer 2014, the record was $17.9\pm0.8\%$, held by the Korea Research Institute of Chemical Technology 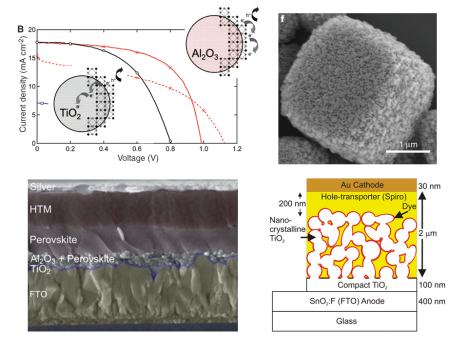 Progress in Photovoltaics: Research and Applications publishes a biannual review of PV efficiency records, under the name Solar cell efficiency tables. The 2014 June review gave a record efficiency under standard test conditions for an organic PV cell of $10.7\pm0.3\%$. For an organic PV mini-module, the record is $9.1\pm0.3\%$. (NB The higher perovskite efficiencies discussed above had not passed audited standard tests in time for the latest biannual review)

Cells have higher efficiencies than sub-modules, which tend to have higher efficiencies than modules. A (sub- or mini-)module is made up of several cells , and power is aggregated from all of the cells. The most efficient cell in a (sub-/mini-)module will, by definition, have an efficiency equal to or higher than all other cells in that (sub-/mini-)module; and not all the module surface area is covered in cells; therefore record cell efficiency will always be higher than (sub-mini/)module efficiency.

Not the answer you're looking for? Browse other questions tagged renewable-energy solar-cells or ask your own question.