When calculating the number of vibrational modes for a molecule, the formulas differ for linear $(n = 3N - 5)$ and non-linear $(n = 3N - 6)$ molecules, where $n$ is number of modes and $N$ is number of atoms in a molecule. I have hard time to conceptualize this strictly in terms of subtracting the combination of harmonic motions for respective atomic coordinates, which lead to to a) translation of the whole system b) rotation of the system, even though it was rather fun to prove the aforementioned relations. Yet, it was only an abstract exercise.

I would like know what extra type of mode - longitudinal or transversal - is being present in the linear molecule?

Perhaps this question is rather incomprehensible, so maybe it will be demonstrative to ask an additional, but specific question. Regarding modes of the linear 3 atom molecule - can be the $\delta_{xz}$ mode be superposed from $\delta_{xy}$ and "antisymmetric stretch" modes, reducing the total number of orthogonal modes to 3? (I think the answer should be no because it would violate the aforementioned relations for number of modes, but I cannot see why.)

I am adding a picture of non-linear molecule modes for quick visual comparison.

EDIT This picture perhaps helped me to understand a bit more why there is an additional mode in the linear molecule. This is related to two orthogonal directions perpendicular to linear axis in which the atoms in transverse mode can move/vibrate. Can you confirm that the extra mode is indeed always transversal? 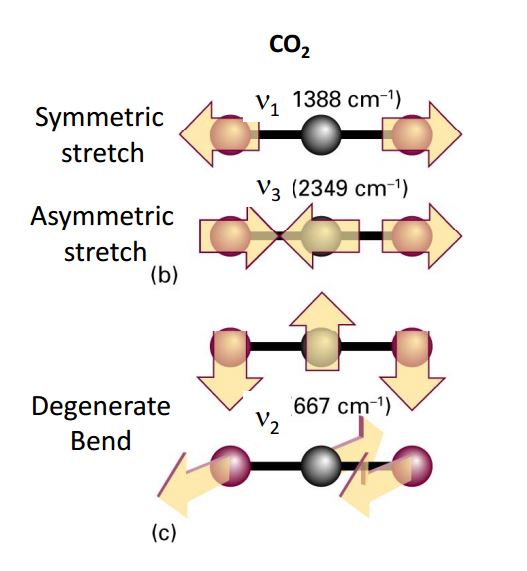 There are 3 ways for a molecule to store energy, excluding electronic energy. Those three ways are translation (the molecule just moving), rotation, and vibration. All molecules can translate in each of the three Cartesian planes. You can also imagine that a non-linear molecule, could rotate in all the planes (xy plane, xz plane, yz plane). A linear molecule on the other hand can only rotate in two directions that result in the use of energy. Those two directions would be spinning around an axis coming out of the page if the molecule is in the pane of the page and rotating around an axis in the plane of the page which is perpendicular to the molecule.

Now, that leaves us only with vibration as a form of energy storage. Because each atom is capable of participating in each of the three forms of energy storage, there are 3N ways to store energy.

EDIT: So to answer what you asked there is not an extra vibrational in a linear molecule but rather a lack of one rotational mode.

Editing Again: That clarifying edit wasn't really all that clarifying because it is quite unclear. What I mean to say is the same as what has since been made clear in the other answers. Rotation of a linear molecule around the $C_\infty$ axis is no rotation (no angular momentum), which opens the door for there to be two degenerate bending modes in a 3 atom system. That is what I mean by saying there is not an extra vibrational mode. There are indeed four distinct vibrational modes, but two of them are degenerate energies. This degenerate transverse mode is a textbook sign of any linear molecule.

I am not too certain of what you are asking. If you are asking why do we not look at a molecule and then just identify the number of independent modes of vibration the answer is that it would be too hard. Real oscillations are a linear superposition of these normal modes, even undergrad spectra are often complicated. Only very simple diatomic give nice Raman and IR spectra, or very symmetrical molecules.

In general we can expand a potential function about an equilibrium configuration and retain second order terms. The first term is the absolute value so will be set to zero. The second term vanishes by assumption that we are at an equilibrium point. \begin{equation} U(\boldsymbol q)=U(q^i_0)+\sum _i\frac{\partial U}{\partial q^i}\bigg|_{0}\eta _i+\sum_{i,j}\frac 12 \bigg(\frac{\partial ^2U}{\partial q^i\partial q^j}\bigg)\bigg|_0\eta _i\eta _j+\sum _{i,j,k}\frac 1 6\bigg(\frac{\partial ^3U}{\partial q^i\partial q^j\partial q^k}\bigg)\bigg|_0\eta _i\eta _j\eta _k+\dots \end{equation} Where $\eta_i = q^i-q^i_0$ and $\dot \eta _i=\dot q^i-\dot q^i_0=\dot q^i$ are variations to the equilibrium configuration. This analysis leads to the following Lagrangian, \begin{equation} \mathscr L=\frac 12\sum _{i,j}(M_{ij}\dot \eta _i\dot \eta _j-V_{ij}\eta_i\eta_j) \end{equation} And a series of coupled harmonic oscillator ordinary differential equations. \begin{equation} \sum _{j}(M_{ij}\ddot \eta_j+V_{ij}\eta_j)=0 \end{equation} A special type of solution is a normal mode, \begin{equation} \eta _j=a_j\cos (\omega t-\varphi) \end{equation} The general solution to the small oscillations problem is then a linear superposition of normal modes, \begin{equation} \eta _r=\sum _r\boldsymbol a_r\cos (\omega _rt-\varphi _r) \end{equation} So far we have not counted modes per say. Although mechanically the aim is to compute $\eta$ in chemistry we normally only bother with the frequency of the mode. Performing this analysis with molecules is a little tricky except for linear symmetric molecules (the symmetry simplifies the problem).

So what about the transverse modes? These are generally complicated and depend on the phase of the oscillations that we choose. This area can lead to ro-vibrational coupling and orbital angular momentum. The quantisation of this is important to quantum chemical spectroscopy.

So you can see that in general real modes are complicated and their interpretation and form depend on phase too. Could we use modes as a basis for other modes? Yes, that is what we do. Could we use modes of different molecules as a basis to predict other molecules modes? Yes ... PROVIDED they are of the same symmetry. In this way we can use the same modes of CO2 as for Carbon disulphide CS2, or silicon tetrachlorides SCl4 modes for methane CH4.

Loss of symmetry changes the problem. How "okay" this is depends really. It is really the symmetry of the molecule that dictates this. This is seen when computing the modes of a non-linear triatomic molecule, they are not too far removed from the linear case as shown here but the number of them is not the same and they are slightly different. Therefore using vibrations of one molecule as a basis for another is flawed. The frequencies we get are not the same!

Does this answer your question?

These two degenerate modes of the CO2 are the complicated transverse modes I was referring to in my answer. If they are degenerate then they have the same roots of the characteristic equation and hence the same expression of the frequencies. However they are complex because of phase and rotational effects and they need NOT be the same. See Goldstein and Lissajous figures which should answer your question :)

Perhaps it would be more intuitive to say that the absence of rotational angular momentum about the internuclear axis is a result of there being no degenerate modes down this axis, or perhaps that there is a $C_{\infty}$ symmetry axis? Or perhaps the fact that there is rotational angular momentum about the transverse axes means there is ro-vibrational coupling, due to the degeneracies? Asking are there any degeneracies along the internuclear axis of polyatomic molecules is a harder question to answer. Certainly we would attempt to construct the analysis from a point where this was not the case.

There are 4 vibrational modes in a molecule like CO2 like you are considering. These would be a symmetric stretch, an antisymmetric stretch, and 2 bends (just like your animations). In case of non linear molecules there is only one vibrational bend: Lets consider H2O. You might be tempted to think that the same argument of two bends should apply here, but on observing carefully, you will realize that if you try to bend it in a plane perpendicular to that of the molecule, the restoring force required to return the molecule to its position just does not exist. In fact such a displacement from initial position would thus result in a rotation rather than vibration (because well, inertia). This is is the more sensible reason that there is one lesser rotation in linear molecules rather than the "rotation around axis makes no sense" argument that kids are usually given.

Not the answer you're looking for? Browse other questions tagged kinematics physical-chemistry molecules vibrations degrees-of-freedom or ask your own question.

0
Vibrational motion of linear diatomic molecule
23
Vibrational anharmonic coupling and noise-induced spontaneous symmetry breaking in a hexagonal finite mechanical lattice
21
In counting degrees of freedom of a linear molecule, why is rotation about the axis not counted?
6
Why do we say linear molecules only have 2 rotational degrees of freedom? Why does the third 'frozen' one not count?
2
The “potential energy” degree of freedom?
0
Dimension of motions of an atom vs a molecule wrt energy/heat calculation
1
Degrees of Freedom of a Linear Triatomic Molecule
3
Actual Degree of Freedom of Diatomic Molecule
1
2 Extra Degree of Freedom in Linear Triatomic Molecules?