Electric field of a plate with homogenous charge density

As an example for Gauß Law's application, one can find the calculation of an electric field of a plate with homogenous charge density in nearly every textbook:

$$E = \frac{\sigma}{2\epsilon_0}$$ I do understand the derivation, but I can't manage to understand the solution: What is the "intuitive" reason that the electric field is not dependent on the distance to the plate ?

I am aware of the fact that we consider the plate to be infinite, is this the point ?

The fact is not only that is infinite, but that it is a plane.

In the picture below, if you consider the effect of the yellow area of the plate right under a probe at a distance $d$, the corresponding electric field will decrease with distance as $\frac{1}{d^2}$.

Consider the effect of two symmetrically opposed red areas at a horizontal separation of $x$ from the yellow one. If the probe is very close to the surface, the two vector fields will be almost opposite to each other, thus having a small vertical (net) contribution. As you move the probe away from the plane, the net field from these two components increases because of the horizontal angle increasing (actually, the sine of it). As you move the probe even further away, the magnitude of the fields gives rise to a decrease faster than the increase due the sine of the angle (which ultimately cannot be bigger than $1$). But since the plane is (redundantly) a plane and also infinite, all the contributions at large angles exactly compensate for the losses at lower angles as you move the probe away, thus giving you a constant field. 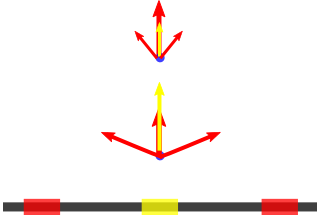