Is the wobbly rope depiction of a radio wave inherently wrong? And how do vectors of parallel waves align with each other?

I don't have a scientific education, yet I'm scientifically curious. Among other things, I'm struggling to understand the nature of electromagnetic waves.

What I have recently realized is that the depiction of a EM wave as wobbly rope is inherently wrong.

Until recently I was imagining radio waves to be invisible wobbly lines piercing the space in all directions. I bet that the absolute majority of common people visualizes radio waves like that.

But the wobbly rope image is not a depiction of a radio wave itself. It's a graph where X axis is distance (in the direction of the wave propagation) and Y axis is the "strength" (or "tension") of the field in each point of that distance. And a graph is not a depiction of an object. It's a documentation of a phenomenon. And the form of the actual wave (and even the concept of the wave itself!) has nothing to do with the wobbly rope.

After investigating this matter further, reading answers on this site (specifically from dmckee and CuriousOne, thanks!) and a couple of sleepless nights, I've figured out that: 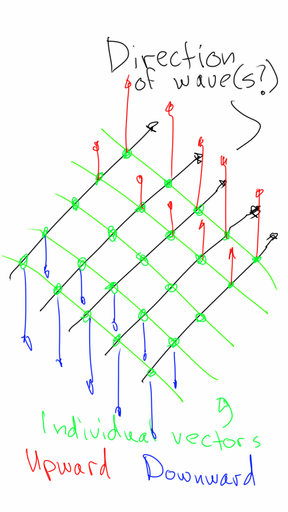 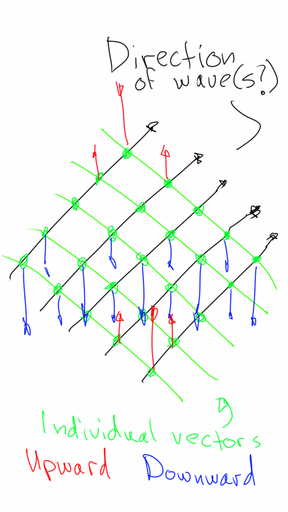 Here's a fresh one: 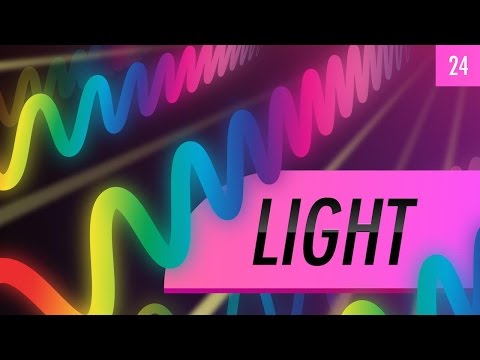 And it's a poster of an educational video about the nature of light!

Many of the things you write sound OK. But I wouldn't say that the other directions in the graph are mere strengths, they indicate the actual value (strength/magnitude and direction as well) of the electric and magnetic fields.

First note that technically the electric field is a vector and it is a field so it should have a vector (possibly zero at every point). Each vector has a head and a tail. You can think of the location of the tail as telling you the place where the field has a particular value. Then you can think if the difference between the head and the tail as telling you both the magnitude and the direction of the electric field at that point, in some specified unit system. So imagine a bunch of arrows all the same color the location of each is telling you where it is telling you the field and how the arrow points from there tells you the value.

Then draw the magnetic fields in a different color. And in both cases you can't draw a vector at every single point because it would just be too much to see them all.

If so, you get a picture much like the first one you drew (though that is just for one the electric and magnetic fields, a wave has both). That is all fine for a classical wave travelling through a vacuum.

For your other questions I think you should look at existing questions about the different topics.

From a quantum perspective it is much more complicated. From a quantum view there isn't an electric or a magnetic field, there is a photon field. When you have a large number of photons all in phase with each other it can look or act like an electromagnetic wave, but it is still different, and if you have a small number or they aren't in phase then it just truly different.

Since in quantum mechanics the charges don't have a location and momentum saying that their momentum changes based on the field where the charge is located just isn't going to be possible because you have none of those things. And if you can't verify the field's values at any location it becomes difficult to say it is there in that way.

As for a transverse spacing in a Faraday cage stopping a wave that varies only in the longitudinal direction remember that you were drawing only the simplest case, the case of a plane wave.

In a plane wave the entire plane parallel to the y-z plane has the exact same electromagnetic field. This very simple (to describe) solution allows the wave to travel entirely in the x direction, over time each part of the wave simply slides over, the new value at distance $x=x_0+\Delta x$ over is the old value at $x_0$ a time $\Delta x/c$ earlier.

But no real wave is ever that perfect. They might expand in a spherical front instead of a plane front. They might have a central region where it is strong and it gets weaker farther out (like a Gaussian beam) some people even make beams where the energy and momentum travels along a cone so there is a central strong region but if you place a small object there the region beyond it still gets light because the light from farther out came from a base of the cone that started out farther from the central region.

Sort of like if you had some racers all lined up for a race but instead if running in their own tracks they ran towards the same point that is in front on the center runner. The center runner gets there first, but if parts of the center of the track are damaged the runners that left later will eventually close in and it won't matter that that the runners originally closer to the center got affected.

So a real wave has a more complicated wave front. And in fact if you are trying to avoid the wires of the Faraday cage you need your beam to be focused to not extend out too far in the direction transverse to the direction of propagation. And this isn't restricting the amplitude, this is saying that the actual wave shouldn't have field values spread out in the yz plane, it should be focused to a small portion of the yz plane.

Imagine you shot narrow beams all towards the same hole in the Faraday cage, you need very precision aiming each point has to has "its x" aimed very precisely to get in that same hole.

In general if you aim your initial propagation directions with accuracy on the order of the wavelength then you gave changed the wave.

Thus is because the direction of propagation isn't a magic thing you can freely associate with a point. It depends on how the electromagnetic field varied in space. When you field didn't vary in the y and z directions then the field travelled in the x direction. Now you are trying to get each region to aim slightly differently so you try to adjust the electric and magnetic field here and there to have each part aim just right.

Waves tend to spread, so if you aim some at that one whole, lots will be lost in other directions and what aimed well for one whole is nor going to aim for the other holes, so the Faraday cage succeeds at blocking almost all fields coming at it assuming the cage is big enough to have many many holes.

I think many of these question can be (and have been) asked as separate questions.

But all this photons form the electric and the magnetic component of the radio wave. Hence each photon has an electric and a magnetic component. Photons once emitted are indivisible units. Imagine photons as bubbles, inflated at one moment to the left and right as a magnetic dipole and in the next moment inflated to the top and bottom as an electric dipole. Both inflations ar e perpendicular to the propagation of the photon. More details see in my paper.

Not the answer you're looking for? Browse other questions tagged electromagnetism waves electromagnetic-radiation photons or ask your own question.

10
How can radiation be a transverse wave? Does light really resemble a rope? How can a 3D field be a medium for non-spatial 1D waves? Need mental model
2
Light: Waves and Particles
3
Are the electromagnetic waves transverse?
0
Do photons oscillate or not?
1
How do you connect classical electromag, the photon, the wavefunction, and QFT to form a picture of light?
0
How to draw all the Electric field vectors associated with an em wave?
4
Can you depict the photon's EM field?
6
Actual shape of electromagnetic waves