Would you, as a stationary observer, hear a sound in reverse when the source of the sound travels with twice the speed of sound? Of course, he wouldn't hear anything at all before the airplane passed by and the sound reaches him, but what about after? Does it reverse due to the Doppler effect?

Yes, the sound can be reversed. Thanks to JiK, we have this animation (Python source code) of a supersonic jet moving forwards that can illuminate what is going on:

However, sound intensity follows an inverse square law: $$ I\propto r^{-2} $$ which means that the larger circles are "quieter" than the smaller circles. Thus, the sounds that you would hear as backwards are muffled in comparison to the normally-directed sounds. So while there is reversed sounds, it would be very unlikely that you would actually distinguish them from the normal-directed sounds.

The image below is a still from a slightly modified version of JiK's code (added an elif (t_i > 7) condition). This shows a bit more clearly the details of the above paragraph, that the normal sounds (in orange and received in the normal direction) would be louder than the reversed sounds (because smaller is louder). 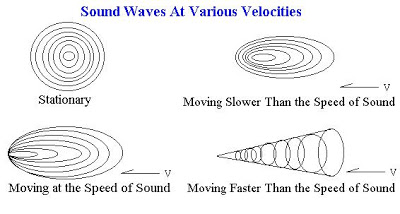 BUT: One important question is (in case of faster than light), the actions of the object who created the rays, are already done by the object, and they can not be changed even if we move faster than the light (images of the object). Example:

A starship with hull1 is moving from pos a to pos b, but we move faster than light. if the starhip is changing its hull in time=a+1 to hull2 , we see still its hull at pos a/time a, but inbetween - as said - the hull is changed physically. If the starhip changes at time/pos=a+1 its hull to a completely different hull9, we see the starship still its hull2. And if we are transmitting to the ship it change its hull meanwhile to hull6 what we will see at faster than light. I mean what we see is the (so far theoretical) what happened in past, but can we physically change the images that we see movin faster than light

Not the answer you're looking for? Browse other questions tagged acoustics speed doppler-effect or ask your own question.

15
Can you "rewind" sound messages by going supersonic?
5
What happens to sound at speeds greater than mach 1?
0
How would reversed sound sound like in real life?
2
What it sounds like when I'm travelling at the speed of sound

10
Hearing a sound backwards because of Doppler effect
6
Meaning of negative frequency of sound wave
3
The Doppler effect in a medium like air (sound) versus the electromagnetic Doppler effect
1
The supersonic bandwagon
2
Doppler Effect and Energy variation
0
Does velocity of source affect the duration for which the observer hears the sound?