Are the electrons at the centre of the Sun degenerate or not?

Trying to find an answer to this question, I came across two different methods of determining whether electrons at the center of the sun are degenerate or not.

The first method, used here, calculates both the critical number density and the actual number density of electrons at the center of the Sun, and compares them together. The result was that the actual number density is lower than the critical, so the author concluded that electrons at the center of the Sun can be treated as ideal gas (non-degenerate). This paper also mentions that in order to completely ignore the wave nature of some particles, the separation between these particles must be much larger than the de Broglie wavelength.

The second method, used here, calculates both the de Broglie wavelength of each electron, and the mean separation/spacing between electrons, and compares the two numbers. The two numbers were almost equal in the conditions at the center of the Sun, and so the author concluded that electron gas at the center is actually "mildly degenerate".

So now, for purposes in which great accuracy isn't required, can electrons in the center of the Sun be treated as non-degenerate ? Or the deviation will still be too large to ignore ?

Checking for electron degeneracy is a matter of comparing the Fermi kinetic energy with $kT$.

If $E_F/kT \gg 1$, then you may assume the electrons are degenerate.

As the temperature in the solar core is $T =1.57\times 10^7$ K, then $E_F/kT = 0.43$. This ratio is clearly too small for the electrons even to be considered as partially degenerate. (For example, the ratio is more like 1000 in a typical electron-degenerate white dwarf star, and about 20 at the centre of a partially electron-degenerate brown dwarf).

I think this concurs with a treatment based on the de Broglie wavelength. The root of this method is the uncertainty principle in 3D. Degeneracy will be important when $$(\Delta p \Delta x)^3 \simeq (\hbar/2)^3,$$ where $\Delta x$ is the electron separation and $\Delta p$ is a mean difference in electron momenta.

If we let $\lambda \simeq h/\Delta p$, then we see that degeneracy is important when $\Delta x \simeq \lambda/4\pi$. i.e. Serious degeneracy sets in when the de Broglie wavelength is an order of magnitude greater than the electron separation.

OK, but the ratio isn't zero either, so there will be a small correction to the perfect gas calculation of the pressure. To work this out properly you would have to do a numerical integration to find the pressure due to a very mildly degenerate gas.

To see whether it is worth bothering, you could simply see what the ratio of ideal degeneracy pressure at this electron number density is to the perfect gas pressure in the core of the Sun.

These expressions must be evaluated numerically or taken from tables (e.g. Table 2.3 in Clayton 1983). However, $P_e/n_e kT$ is $\geq 1$ for all values of $\alpha$. So any degeneracy always increases the pressure over that of a perfect gas. The image below (from Clayton 1983) shows how $P_e/n_e kT$ varies with $\alpha$. Clayton says that "the gas pressure is essentially that of a non-degenerate gas for $\alpha>2$". 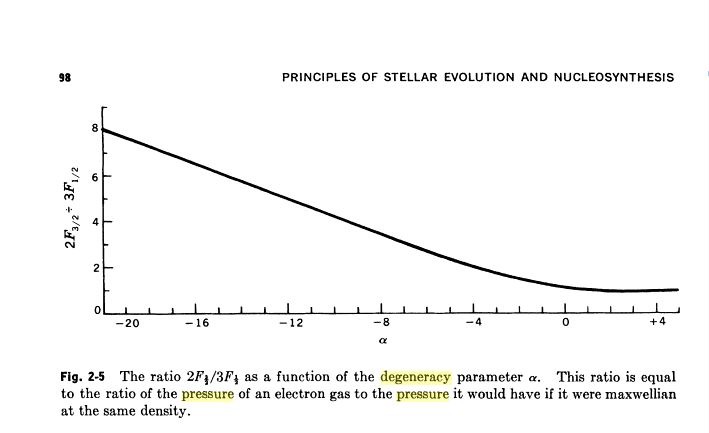 Not the answer you're looking for? Browse other questions tagged thermodynamics astrophysics electrons sun stars or ask your own question.

12
Stable muon density inside a white dwarf star?
1
What is the velocity distribution of electrons in the suns core?

1
Thermodynamic process when nebula is heated
7
Can the Sun's core be treated as an ideal gas?
14
Why don't electrons and protons in a white dwarf combine before the electrons become ultrarelativistic?
1
Model to predict temperature of the Sun?
7
Pressure of Bose-Einstein-Condensate in decreasing volume
1
Trouble understanding exactly why core of sun does not mix with outer layers
1
Equations of state for white dwarf stars