Path of light as it travels between two black holes

What would happen to light passing through a narrow space between the event horizons of two equal-mass black holes? Would it deviate or follow a straight path?

What would happen to light passing through a narrow space between the event horizons of two equal-mass black holes? Would it deviate or follow a straight path?

Like iharob and JohnnyMo1 said, the light goes straight. But something else happens to it. See this screenshot of Irwin Shapiro's seminal paper: 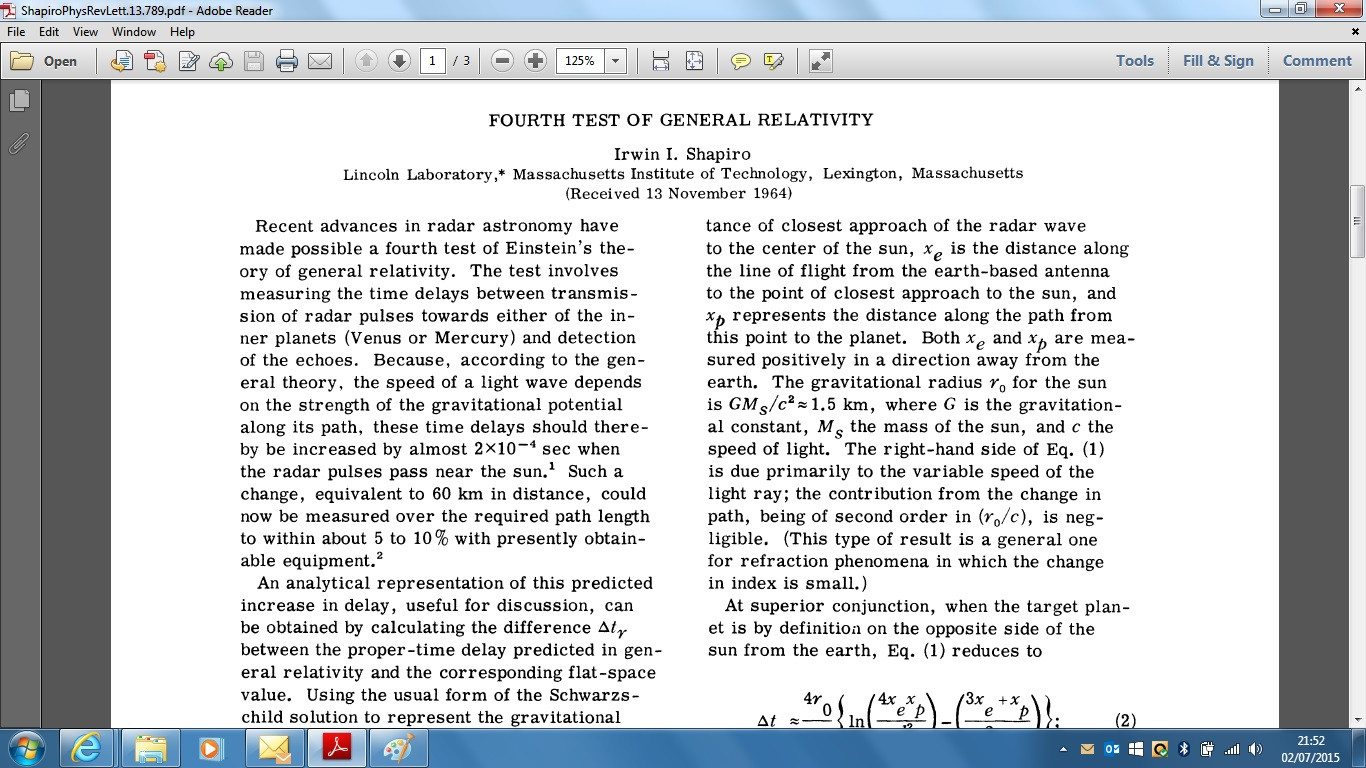 See where he said the speed of light depends on gravitational potential? The light goes straight, but it also goes slower. Also see Professor Ned Wright's Deflection and Delay of Light, where you can read this: "In a very real sense, the delay experienced by light passing a massive object is responsible for the deflection of the light".

Einstein said much the same here: "the curvature of light rays occurs only in spaces where the speed of light is spatially variable". Also see Baez. It's like light veers, like a car veers when it encounters mud at the side of the road. However when light passes between two massive objects, it isn't slowed down more on one side than the other, so the net deflection is zero.

I think the answer is very simple if you ask another question, you are implying that both black holes generate the same gravity and that the light passes exactly through the middle between them, so the question is

Since given the conditions it's not possible to give an answer to this question, it means that it will not deviate.

I'm going to assume you mean that the light travels on the precise center line between the holes, as iharob did.

This sort of symmetry question is very common in physics. Here's a similar question in classical electrodynamics. "If I place a positive charge at the center of a perfect equilateral triangle of equal negative charges, will it move?" Let's say it does move, then we can draw a vector for the direction the force on the center charge points. But if we rotate our heads by 120 degrees and look at the situation from a different angle, all the charges are in the exact same configuration, but the force now points in a different direction. How can that be? We're forced to conclude that the force does not really exist. There is no consistent direction it could point in! Similar arguments apply for a square of charges, or a pentagon, etc.

Not the answer you're looking for? Browse other questions tagged general-relativity visible-light black-holes symmetry geodesics or ask your own question.

23
Why are objects at rest in motion through spacetime at the speed of light?
2
Black hole corona and bipolar outflows