Does a person inside a falling bus fall to the front of it?

So I was watching Final Destination 5 and something caught my attention. There's a part where a bridge collapses and everything falls apart, so there's this bus that has a person inside (unaware of what was happening) and it falls vertically (the front of the bus is now pointing down and the back points to the sky). As the bus is falling, the person is shown slipping through the seats and finally ending up on the front window at the front of the bus. My question is, would that actually happen if someone was falling inside a vehicle? Or should they be pushed to the back? Or should both fall equally?

Here's the clip of the movie: http://youtu.be/m01ICYfdLsA?t=1m7s

Finally, note that in the limit where the bus is falling at terminal velocity, the effects of air resistance and gravity would be just like those on the ground, since the bus would be moving with constant velocity. Thus, objects inside the bus would move (relative to the bus) just as they would if the bus was sitting on the earth.

Oh, and this whole derivation ignores things like rotation of the bus; a passenger in a bus tumbling end over end would feel a centrifugal force away from the bus's center of mass, even in the absence of air resistance. But that's another kettle of fish that I don't have time to open just now.

The bus experiences considerable drag, and will therefore fall more slowly than a person inside the bus. The scenario is possible in principle - but after carefully viewing the clip and doing some calculations, I believe that the details are inaccurate.

Assume the bus has a mass of 5000 kg (pretty light for a bus), and is 3 m wide by 3 m tall - so the forward facing area is 9 m2 (it will be more if the bus falls at an angle, but in the movie it seems to be dropping straight. Despite the initial angular momentum as it tips over!).

The drag force is

For the dimensions given, after one second the velocity is 5 m/s and this force will be approximately

(assuming drag coefficient of 1 - close to, but a little bit less than, the coefficient for a cube; That is not yet enough to make the bus go visibly slower.

We need to know how high the bridge is. It turns out that this scene was filmed at Lion's Gate Bridge in Vancouver. This has a clearance height of 61 m. That's roughly what I would have estimated based on this picture (screen shot from the YouTube clip at 1:11, with blocks added by me to show it's about 6 buses high. A typical bus is about 10 m long, so it all makes sense): 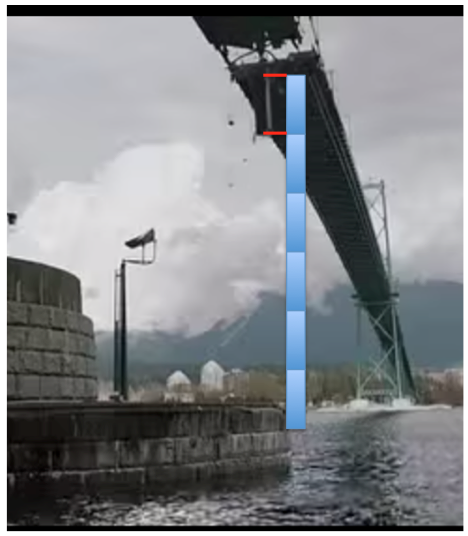 Now the actual drop takes from 1:10 to 1:20 in the clip - that would suggest there is some "temporal dilation" going on. Normally, dropping 60 m would take 3.50 s; but in the film it takes 10. This is a clue that normal laws of physics have been suspended for the scene.

For an object free-falling in the presence of drag, the terminal velocity is given by

The velocity as a function of height is 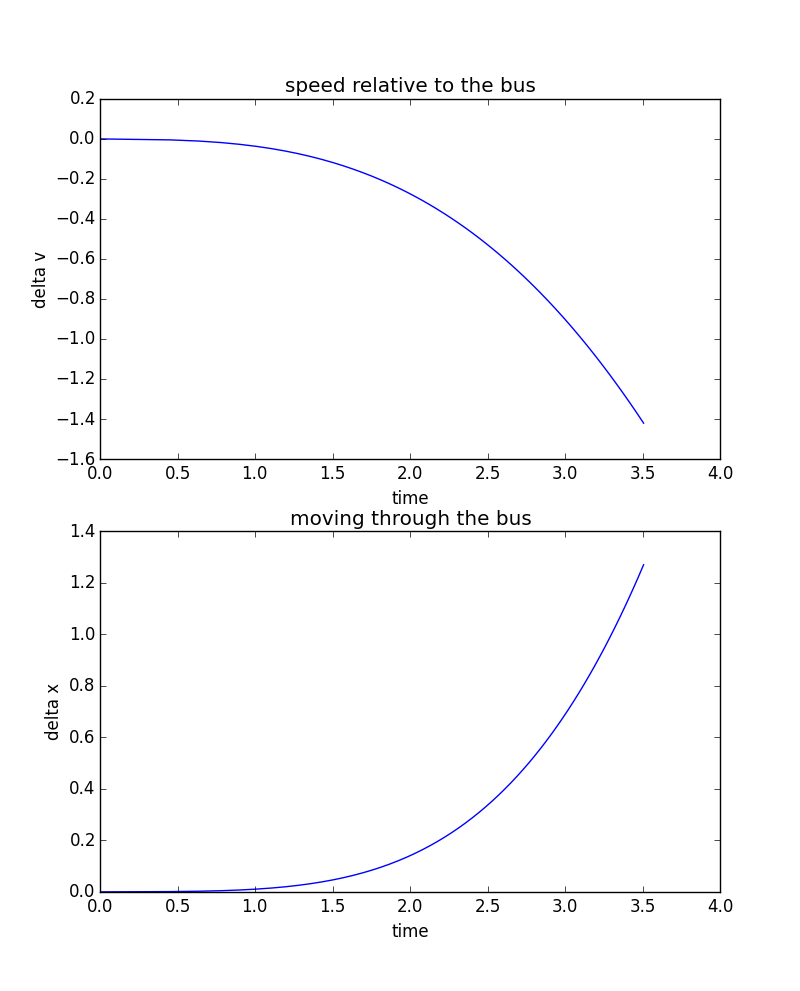 This tells me that the scene as shown in the movie does not follow usual Newtonian physics. Either the air was ridiculously dense, the bus was much lighter than it looked, or... they just did what they wanted because that's what the script called for. Movie physics.

To put concrete numbers on the situation, lets say the bus is moving at 80 miles/hour when it hits the water. That means it is facing an 80 mile/hour headwind as it falls, slowing down its acceleration. The person inside does not experience this headwind because the air around him moves with the bus (similar to how it's easier to swim fast in a river if you're heading downstream). He is thus able to catch up to the front of the bus. Well, possibly. That would depend on the complicated aerodynamics of the bus and the length of the fall. But, the film is at least approximately right.

No, no you guys (Except Floris and those who up-voted him) have missed an important observation... Look Carefully at the video again.

At first the bus just tilts as the bridge bends. When the bus starts tilting (due to friction with the bridge it has not yet started falling) it has not yet obtained considerable vertical velocity. However as the man loses his balance (had this not been a movie the man might have caught a seat to prevent this) he obtains a small vertical velocity. Now as the bus starts falling they are both experiencing almost same acceleration (the difference due to air drag will be less than 0.1% and not noticeable at such small velocities and obviously cannot grant such a great velocity to the man) . However due to the initial relative velocity of the man he keeps falling down.

Had air drag been the case the following observation would have taken place : Drive a car and obtain a speed of about 80 km/hr. Now release the accelerator (Do NOT press the brakes). Due to air resistance the car should experience a backward force we should experience that much of relative velocity as the man in the movie experienced. Whatever we will experience will be due to the joint of air drag and friction but still it would not compare to the velocity as shown there. However take a jack stand and lift the car to (not much) say $30^\circ$ and sit in it (note that in the movie the car had tilted more than $60^\circ$ before falling) . After conducting these two experiments (I can imagine the outcome without even experimenting) you would know which is the main reason.

If we take the drag forces into account instead:

If the bus and the person would fall separately and none of them has the time to reach the terminal velocity I argue that the deceleration due to to the drag forces is bigger on the bus than on the person (because it depends on the size of the projection of the object on the plane perpendicular to the velocity and not on the mass of the object) and then I would say that the person would "fall inside the bus".

Not the answer you're looking for? Browse other questions tagged newtonian-gravity reference-frames drag free-fall equivalence-principle or ask your own question.

22
Would it help if you jump inside a free falling elevator?
3
Is the speed of a person falling down different if doing a forward somersault during the fall?
7
What would a person experience in a free-falling elevator in a shaft long enough to reach terminal velocity?
1
Gravity, falling bodies, and the equivalence principle
0
Which way would objects, inside a container falling through earth's atmosphere, move, relative to the container?
1
Making tidal forces “disappear” via coordinate transformations
4
Why does a person float rather than staying in the elevator's floor in a free fall?