Why do atomic clocks only use caesium?

Modern atomic clocks only use caesium atoms as oscillators. Why don't we use other atoms for this role?

"Because that is how the second is defined" is nice - but that immediately leads us to the question "why did Cesium become the standard"?

To answer that we have to look at the principle of an atomic clock: you look at the frequency of the hyperfine transition - a splitting of energy levels caused by the magnetic field of the nucleus. For this to work you need:

When you put all the possible candidate elements against this table, you find that Cs-133 is your top candidate. Which made it the preferred element; then the standard; and now, pretty much the only one used.

I found much of this information at http://www.thenakedscientists.com/forum/index.php?topic=12732.0

The choice of cesium is due to various factors. It's worth noting that your statement "Modern atomic clocks only use caesium atoms" is simply untrue. At the very least, rubidium and hydrogen clocks are common, and you can get rubidium standards on eBay for well under $200. But the best performance comes from using cesium. In part this is because it was chosen as the standard, and as such it is considered more useful to spend development effort on improvements to the standard rather than an alternative.

But why was cesium chosen? Various factors:

EDIT - PlasmaHH has remarked on the superior frequency stability of hydrogen over cesium. While this is true, cesium shows better intrinsic accuracy (about 2 orders of magnintude), and no ageing effects, where hydrogen does age. The combination makes cesium a better standard, since a standard has no reference to check against in order to calibrate out drifts. See http://www.chronos.co.uk/files/pdfs/itsf/2007/workshop/ITSF_workshop_Prim_Ref_Clocks_Garvey_2007.pdf for a discussion by a manufacturer.

As mentioned by WhatRoughBeast, caesium offers several advantage over other microwave standards. Its most important feature is the presence of an atomic transition with a very small linewidth. This allows the energy of this transition to be established very accurately (see the uncertainty principle).

However, caesium is not the only atom with a narrow transition. For example, Yb+ ions have an octupole transition that is nHz wide: an atom excited to this state would last for several years before it decayed. This, in principle, would allow the frequency of the transition to be determined extremely well.

So why do atomic clocks only use caesium? Well...

The modern second is defined in terms of the Cs hyper-fine transition so, of course, no other clock can be as accurate as caesium, purely by definition. But in the field of atomic clocks, the word "accurate" takes on a specific meaning.

Frequently in physics, we refer to accuracy and precision. The accuracy of something is how well its average agrees with the "correct" value, whereas the precision is how scattered the results are. See the image below. 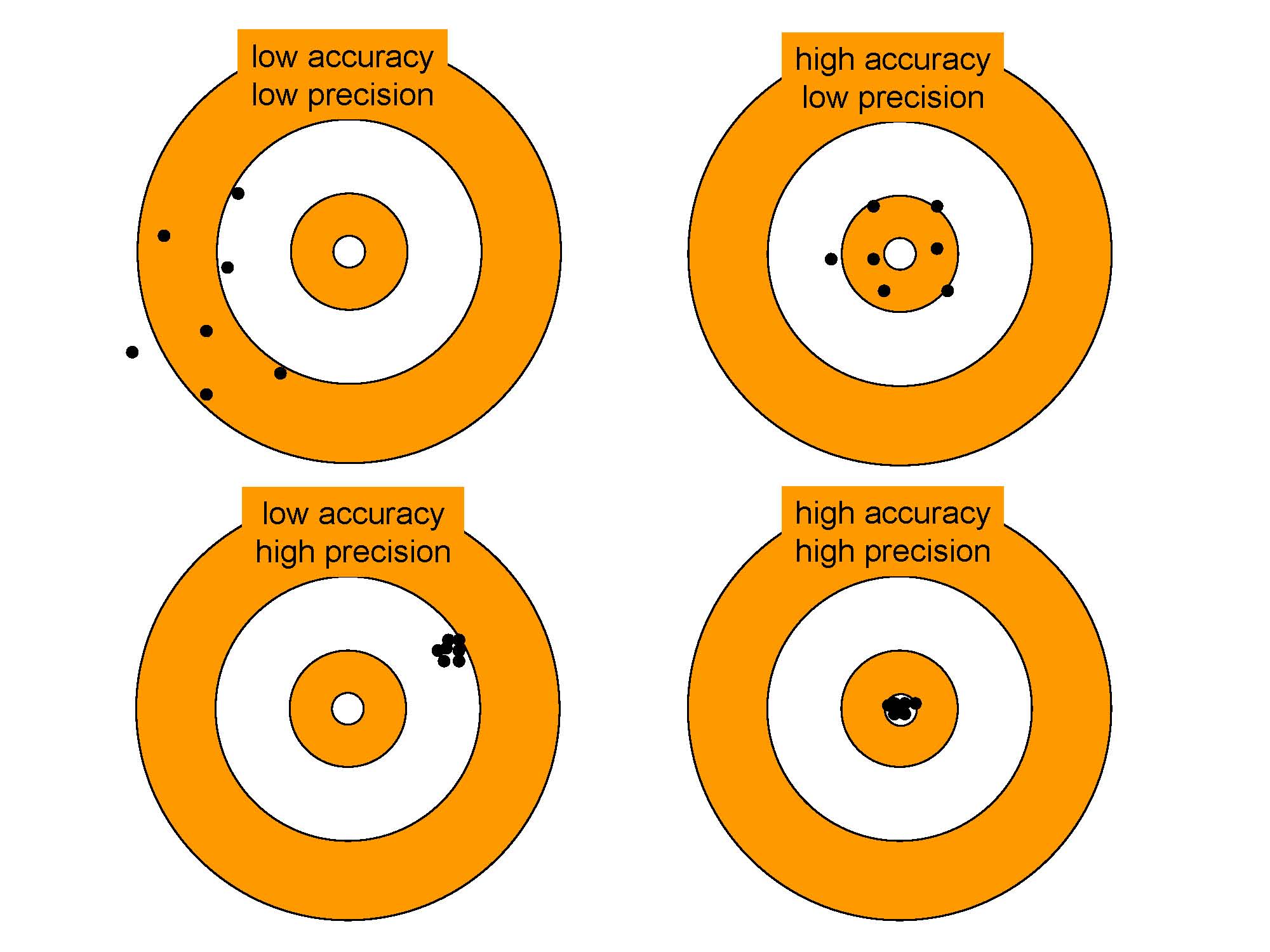 Secondary representations of the SI second

So if the second is defined by caesium, why did I say that not all clocks use it?

The Comite International des Poids et Mesures (CIPM) in 2012 adopted 8 secondary representations of the SI second. 7 of these are optical clocks which offer many advantages over a caesium fountain (known as a microwave standard).

To know how good a clock is, you must compare it against another clock otherwise you have no reference! The best modern caesium fountains agree with each other to approximately $\frac{\Delta \nu}{\nu} \approx 10^{-16}$. Modern optical atomic clocks, such as ytterbium ion clocks or strontium lattice clocks, can exhibit agreements approaching $\frac{\Delta \nu}{\nu} \approx 10^{-18}$: that's 100 times better! Moreover, optical clocks are still improving quickly. It seems that, very soon, the best optical clocks will outpace microwave clocks by many orders of magnitude. See this article in Nature for more information.

These clocks work by using transitions that use visible frequencies, as opposed to microwave frequencies used in Cs clocks. So, while Cs still is the definition of the second, modern optical clocks offer far better performance and are expected to soon replace caesium as the standard.

The graph below shows the performance of atomic clocks throughout time. The red points represent the points at which optical clocks are performing better than caesium clocks. It is important to notice that caesium fountains have experienced improvements of 5 orders of magnitude over the last 40 years: no mean feat! 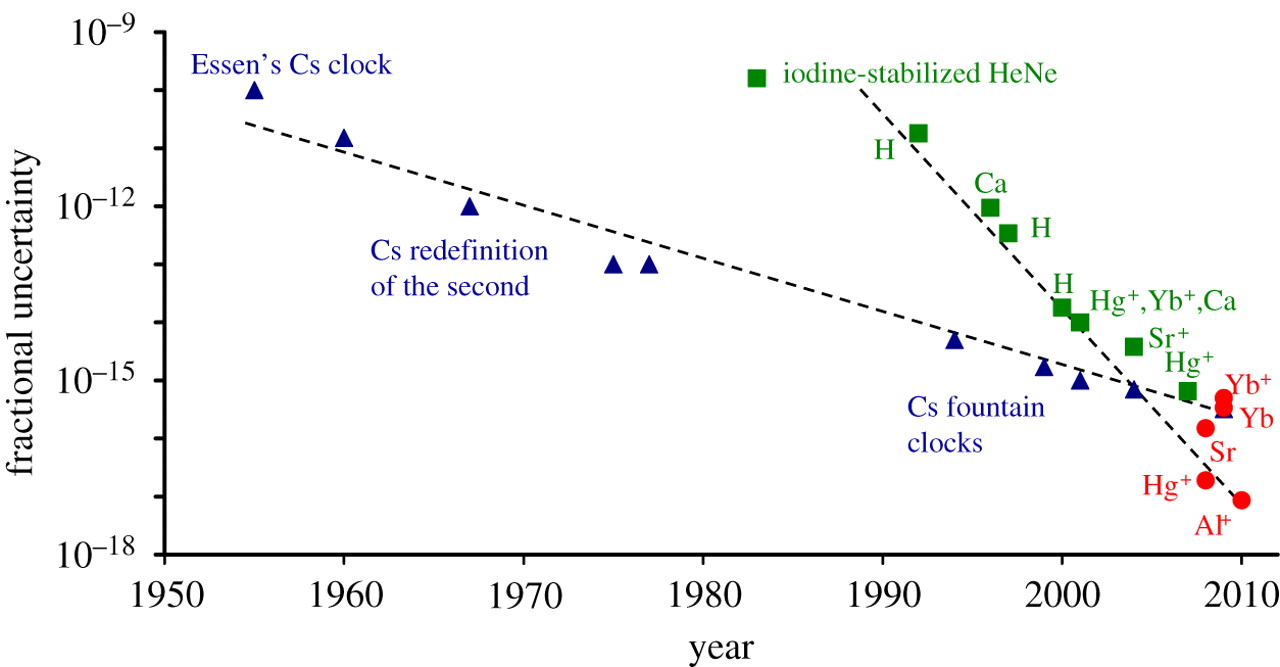 Because one second is defined as (from the SI brochure):

the duration of 9192631770 periods of the radiation corresponding to the transition between the two hyperfine levels of the ground state of the caesium-133 atom, ${}^{133}\mathrm{Cs}$.

Thus, using any other atom is irrelevant (even if calculate some correction time factor).

As other users have said, it has one stable isotope, so that's nice.

It's also the SI standard. We define the second by Caesium. Specifically:

So, if we were to use another atom, it would not be as precise. Even if we calculated how many periods of another substance it took to equal a second, even if it was only off by a factor of 10-12 , it'd still be not as accurate as the system we're using today.

Not the answer you're looking for? Browse other questions tagged time metrology atomic-clocks or ask your own question.

66
What are the proposed realizations in the New SI for the kilogram, ampere, kelvin and mole?
14
How is a second measured? And why is it measured that way?
4
Why is cesium used to measure time in atomic clocks?
0
Is an ideal Cesium Standard atomic clock more accurate than Einstein's thought experiment light-clock?

11
How do we know that the cesium-beam frequency used in atomic clocks is always the same?
6
Cooling of atomic clocks
2
How do cesium atomic clocks measure time?
3
How many caesium clocks are there on each GPS satellite ? Is there any other atomic clock on-board?
0
What do clocks measure?
1
What causes clock drift in quartz oscillators?
73
What reference clock is an atomic clock measured against?
27
Why should a clock be "accurate"?