I have two question about axion strings:

Statement that configurations with different winding numbers are stable means that they are separated by infinite potential barriers. But I don't understand how $(1)$ creates barriers for different $n$.

The topological stability of global $U(1)$ vortices or strings has been discussed in several introductory books on the topic (see, for instance, Advanced Topics in Quantum Field Theory by M.Shifman).

In cylindrical coordinates $(\rho,\theta, z)$ of physical space $\mathbb R^3,$ a static, straight vortex or string of core size $\delta$, aligned along the $z$-axis, is given by the map

The claim is that $n$ characterises different homotopy classes of non-contractible loops in $\mathfrak M$. In other words, $n$ is a homotopy-invariant, that is there exists no homotopy which can continuously deform $\varphi$ to another $\varphi'$ with a different winding number. For example, for the two vector fields shown below (the left is a string with $n=2$ and the right is a string with $n=3$), the claim is that there is no homotopy that morphs one into the other. 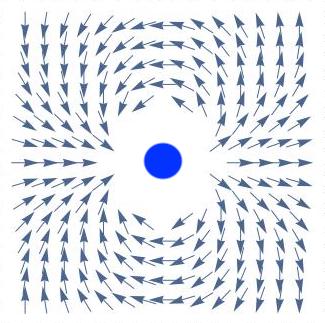 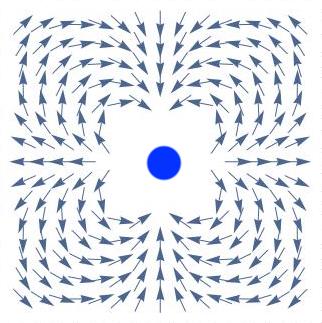 This claim is readily established by the observation that $\pi_1(\mathfrak M) = \mathbb Z$. Of course, it is obvious that if you loop a rope say twice around the rim of a wheel and tie the ends, it is impossible to unwrap the rope with local shenanigans into a loop that winds only once, unless you do something discontinuous such as unwrap it outside the wheel. It is a consequence of the global topological structure of the vacuum manifold.

The above argument is one of purely topological origin and has nothing to do with any model-specific tunnelling amplitudes being suppressed by an infinite potential barrier in this case. In fact, a quantum field theory does not allow tunnelling between degenerate vacua at all, regardless of the specifics of the model. The Hilbert space of each degenerate vacuum is completely separate from the Hilbert spaces of other degenerate vacua. This is the very reason why symmetries can spontaneously break in quantum field theory (but not in quantum mechanics). You see, granted that a global $U(1)$ symmetry completely breaks outside a vortex of a certain core size and all points in spacetime pick a certain vacuum during this phase transition, the question is not whether this vacuum configuration can dynamically tunnel into another vacuum configuration with a different winding number (because it simply cannot, due to the general fact that degenerate vacua cannot tunnel at all in quantum field theory). The question is whether the winding numbers are stable under arbitrary local perturbations of the Hamiltonian of our theory (the perturbations being respectful of the original symmetry). If they are stable (and they are, because of topological protection), then it either takes an infinite amount of energy to change the winding numbers or you have to do something nasty (discontinuous) with your order parameter, namely the vortex.

Not the answer you're looking for? Browse other questions tagged symmetry-breaking topology topological-field-theory axion or ask your own question.

2
Kalb-Ramond action and topological string radiation
8
Why is is the vacuum expectation value (VEV) of the axion field such that it cancels the theta angle of QCD?
8
Peccei-Quinn-symmetry and effective Lagrangian for the Axion field
6
Is the non-trivial topology on the torus reflected on the Bloch sphere?
6
Why did David Tong say that the global topological $U(1)$ symmetry is unbroken in Higgs phase?
5
Obtaining the effective Lagrangian for axions from the spontaneous breakdown of Peccei-Quinn symmetry
8
Can a symmetry of a topological field theory be spontaneously broken?
5
Integrating over non-trivial fiber bundles - Chern-Simons Theory
1
Instantons in 1+1 dimensional Abelian Higgs model