In atomic bomb tests under ground, where does the displaced volume of the rocks go?

Underground atomic bomb tests are done in a deep, sealed hole. Not all underground tests eject material on the surface. In this case, they are only noticeable as earthquakes, according to German Wikipedia on nuclear tests. There seems to be no bulge above the explosion site afterwards.

I assume the explosion creates a cavity. Also, I assume that rocks are not very compressible, more so for rocks deep under ground, without many gas-filled pores.

I'd like to understand where the volume of the rock goes. Is it one or more of these:

Regarding compressibility, "Geologic materials reduces in volume only when the void spaces are reduced, which expel the liquid or gas from the voids." (Wikipedia: Compressibility - Earth science) The answer of LDC3 hints that it can be assumed that the ground chosen for nuclear tests is most probably not porous, to avoid migration of radioactive isotopes. From this, it could be concluded that compressibility is not an important factor, which is certainly counterintuitive.

There are probably some more options, and it may be more than one mechanism. But where does that volume mainly come from?

This shows that the crater you get from a nuclear explosion depends on the depth of burial: 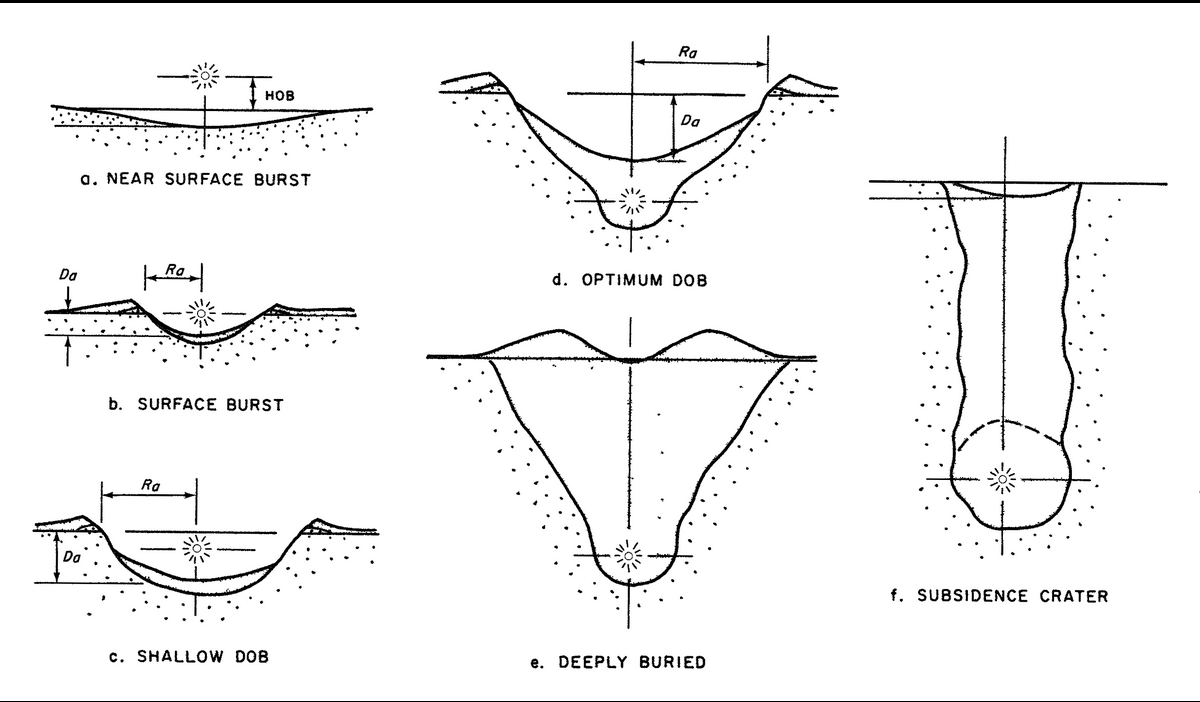 I think the most interesting diagrams are the ones labeled (e) and (f) - where the explosion happens at great depth. In that case, you get a "tight packing" of the soil above in a way that I think is similar to the mechanism that causes sugar to "settle" if you first fill a bowl to the rim, and then tap the bowl gently. The shock wave that travels through the soil (or the sugar) causes individual grains to find a more energetically favorable orientation - so they are a little more tightly packed. This can result in a crater.

Now whether you consider this "compacting voids" is a matter of opinion. But it's a real effect. Of course, very close to the nuclear reaction the heat will be so great that the rock will liquify; as a liquid it might be able to pack more tightly, although that depends on many factors.

I would think that there is a cavity after the explosion, as well as
- Rock is compressible, and the surrounding rock is squeezed together
- There is a bulge on the surface, it's just too flat to be noticeable

I don't think the rock would be porous since that would allow radiation to leak out of the site.

When testing went underground, deep layers of sedimentary soil from the erosion of the surrounding mountains allowed for relatively easy drilling of test holes. Hundreds of subsidence craters dot the desert floor. A crater could develop when an underground nuclear explosion vaporized surrounding bedrock and sediment. The vapor cooled to liquid lava and pooled at the bottom of the cavity created by the explosion. Cracked rock and sediment layers above the explosion often settled into the cavity to form a crater.

Not the answer you're looking for? Browse other questions tagged atomic-physics geophysics explosions or ask your own question.

1
What does the Atomic Form Factor mean?
13
An atomic bomb explodes inside of an "unbreakable" container which is on a scale. Does the "weight" of the container change?
3
What is the atomic composition of the human body, by volume?
1
Bohr atomic model: does the electron fall?
3
Why does radiometric dating tell us the ages of rocks?
5
In chemical compounds, where does the "magic" come from in atomic "magic numbers"?
0
Why does the momentum of the shrapnel of a resting bomb remain zero after the explosion?