Hafele-Keating revisited with a gravity clock

Most modern clocks use electromagnetic phenomena to measure time. There are perhaps some older clocks that involve gravity to some degree (hour glass, pendulum), but I believe they still have a healthy dose of an EM component to them.

Such an apparatus could be tuned such that each cycle took exactly one second to occur. In that case, the EM component of the time delay would be very small.

I have an idea that predicts that such a gravity clock would not experience time dilation (aside from the minor EM component). But, in trying to imagine an experiment to test such an idea there seems to be numerous challenges.

Certainly, engineering a gravity clock with atomic clock-esque accuracy in-and-of-itself would be highly challenging. But, in this case we need to make the clock move and move in away that doesn’t effect its accuracy (e.g., with vibrations) or perhaps more dauntingly, that doesn’t vary its gravitational field.

As such placing clocks in airplanes or anything that affects the clock's altitude will not work. Also, where as a satellite may have a relatively stable gravitational field, the experiment requires a change in velocity to measure any potential difference which isn’t possible with a satellite (at least not while maintaining a constant gravitational field).

The best I can come up with placing a gravity clock and an EM clock on stationary maglev train; calibrating the two clocks; quickly accelerating the train to max speed (which is about 300 mph these days?) and then syncing the clocks once you hit cruising speed. At that point, let the train run for as long as possible (in a perfectly straight line on a perfectly flat track with as little geographic variation around as possible). Just before the train is to start decelerating compare the two clocks to determine if there is any shift in their timing.

1: Is it conceivable in such a setup to obtain the accuracy necessary to detect such a signal? (I hypothesize that the gravity clock will not experience time dilation at all.)

2: Is there perhaps a different setup that would be able to achieve the necessary accuracy to detect such a signal?

I'm afraid you're overcomplicating things, aepryus. Yes, most modern clocks use electromagnetic phenomena, but your pendulum clock employs gravity in much the same fashion as your water-drop clock. The clock rate doesn't depend on gravitational potential, it depends on the first derivative of potential, the "slope" as it were. The force of gravity. And this decreases as altitude increases. So the pendulum clock goes slower when it's higher up. Not faster like your quartz wristwatch.

As for putting your clocks in a satellite, this is effectively what is done for GPS. See Phil Fraundorf's picture showing the GR gravitational time dilation and the SR time dilation caused by relative speed: 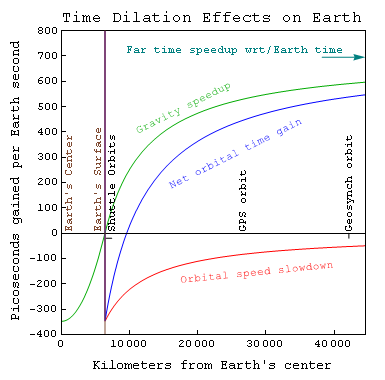 Is it conceivable in such a setup to obtain the accuracy necessary to detect such a signal? (I hypothesize that the gravity clock will not experience time dilation at all).

Yes, your hypothesis isn't quite right, but's it's good to see somebody thinking for themself. One brownie point.

Is there perhaps a different setup that would be able to achieve the necessary accuracy to detect such a signal?

Just take your clocks down a mine and up a mountain. And remember this: in physics, some things are easier than you think.

Not the answer you're looking for? Browse other questions tagged special-relativity experimental-physics time time-dilation or ask your own question.

0
Is it really “time” that is dilating?
3
A clock in freefall
3
Does a clock oscillating in a friction-free hole through the center of a planet run slower than a stationary clock on the surface?
0
Hafele Keating in space: twin paradox redux
3
Relativity tangential light clock
7
Why do GPS satellites care about Earth clock at all? (relativity)
3
Would Earth clocks tick faster than a clock on a GPS satellite if we disregard gravitational time dilation?
1
Time dilation in Einstein's train