Why is my two body model not working? [closed]

The code looks OK to me, but the results look very bazaar and completely nonphysical. I suspect the problem may be related to the discrete time steps taken. I have tried making the rate of acceleration proportional to distance^2 and the results don't look any more realistic.

Here is the code and results: 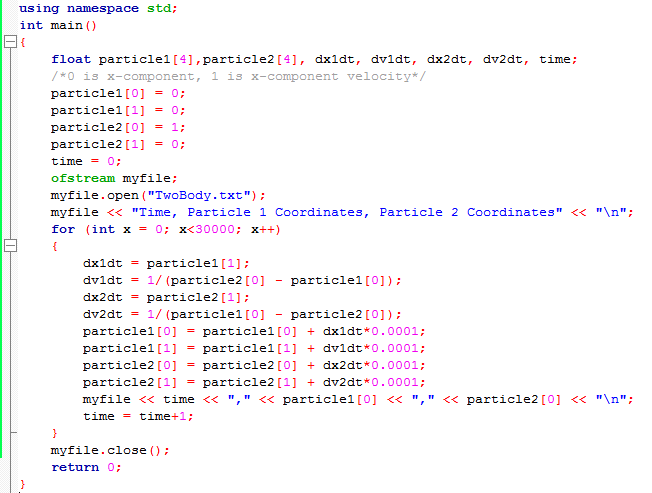 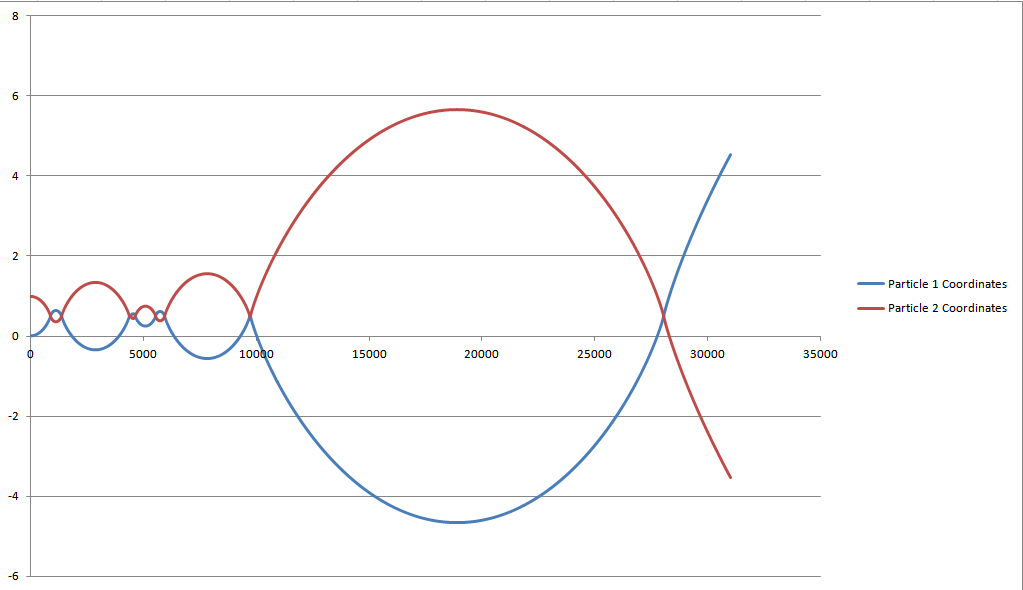 The above graph is a Position Vs. Time graph.

How can I adjust the code to obtain more reasonable results?

In situations like this, it is a good idea to adjust the time step based on the gradient of the force - because the whole concept of numerical integration is that "things don't change too much from now until the next time step", and that assumption is violated when you move rapidly through a region with fast-changing force.

This has a risky side-effect: if you make the time step "small enough" to cope with the rapid variation, and the variation becomes "infinitely rapid", your algorithm may get "stuck" - you may run into Xeno's paradox of the Achilles and the tortoise.

To avoid getting stuck, some numerical integrations (like Runge-Kutta) are better at taking into account higher order curvature - allowing a bigger step without losing accuracy.

In your case though, the acceleration for the entire next time step is determined by the current position - so if your particles happen to be close to each other at the start of the step, they get thrown far away, and since their attractive force will then be greatly diminished they will have a hard time getting back.

A few criticisms on your code:

Regarding the first point, I would use a struct for my particles:

Which is immediately more readable... If you want to work in two dimensions, you can either write them explicitly as part of your struct: (double x; double y; double vx; double vy;) or make them arrays.

But really - variable time steps and higher order interpolations would help with the stability of your solution.

You're getting particles that get 0 distance from each other, and therefore have infinite acceleration. The computer cannot resolve this, and so it explodes according to how close the step gets to zero.

I'm not sure what "physical" behaviour would be, given that zero distance point masses are difficult to study. But if you added in a y coordinate and gave it an initial velocity you might get better results (basically an elongated ellipse instead of an oscillating line).

You could make the initial y velocity very small, so that you approximate the X movement. Or maybe just add a small offset to your division.

Not the answer you're looking for? Browse other questions tagged simulations computational-physics software numerical-method or ask your own question.

0
Modeling falling spheres
2
Strange Behavior in Spring Computer Model
1
My orbiting body is orbiting about the wrong focus of it's elliptical orbit… why?
2
Curvature of a particle move
1
Particle motion characteristic
4
How to conserve momentum when numerically-integrating the path of a charged particle through a magnetic field
1
Zigzag behavior on non-reflecting boundary
1
How to improve this simple Brownian motion simulation by adding viscosity?