Disclaimer: I'm not asking for homework help. I don't understand how my calculations work out conceptually. If you can help me understand the connection between the concepts, I'd really appreciate it. 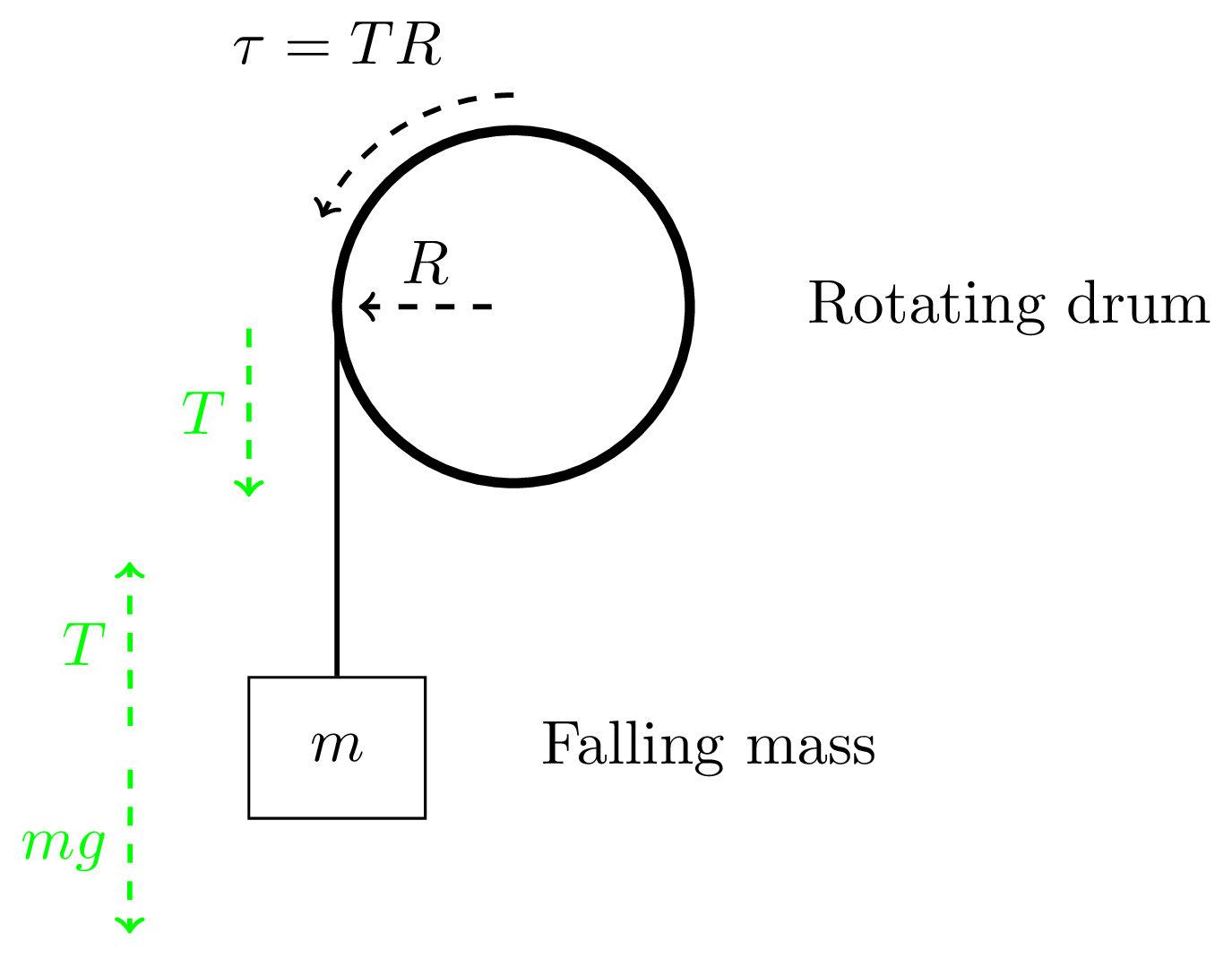 The experiment set-up is composed of a drum with string wrapped around it and a falling weight connected to the string, as shown in the above figure. The rotational axis of the drum is fixed in space, but the drum is free to rotate about this axis. The weight is free to fall under the influence of gravity, except that the mass is attached to the inextensible string wrapped around the drum. Thus, as the mass falls, the drum must unspool the string, meaning that the drum must rotate.

Now if the mass of falling weight and the angular acceleration of the drum is measured, then it is possible to deduce the drum's moment of inertia. This is achieved through the formula $\tau = I \alpha$, where $\tau$ is the torque on the drum, $I$ is moment of inertia of the drum, and $\alpha$ is the drum's angular acceleration. To deduce the moment of inertia $I$, it is necessary to know $\alpha$ and $\tau$. As stated in the first sentence of the paragraph, $\alpha$ is measured directly, but $\tau$ is not; besides $\alpha$, only the mass $m$ of the falling weight is known.

Thus, $\tau$ must be calculated from $\alpha$ and $m$. To see how, first consider what happens if the drum prevented from rotating. Then the drum cannot spool out any string, so the mass cannot fall. In this case, the tension $T$ in the string is given by $T=mg$, and so the torque $\tau$ on the drum from the spring is $\tau = TR = mgR$, where $R$ is the radius of the drum.

Now consider what happens when the drum is allowed to rotate. In contrast to the previous case, the drum can spool out string, and so the mass does fall. If the drum has angular acceleration $\alpha$, then, since the string is inextensible, the linear acceleration $a$ of the hanging weight is given by $a=\alpha R$. Now since the hanging weight is accelerating, the tension $T$ of the rope must not be exactly balancing the gravitation force $mg$; rather, the tension must be less than the gravitational force: $T<mg$. The amount of $T$ from $mg$ is $ma$ by newton's second law to be : $T=mg - ma$. The torque can be calculated from $T$ through the formula $\tau = TR$ as before. Thus we find $\tau = (mg -ma)R = m(g-a)R$.

Now we know how to find both $\tau$ and $\alpha$, so that we may deduce the moment of inertia $I$.

The real question, however, is how do you avoid making these mistakes in the future. One thing you can do is pay attention to your units. If you had been paying attention to units, you would have notice that the value you calculated for torque doesn't even have the right units, so something must be wrong.

An even better way to avoid making errors would be to work with symbols until you obtain a simplified expression for your final answer, and then and only then plug in numbers. For example, in this problem, you would write the relative error in the approximation as $\dfrac{|\tau_a - \tau_e|}{\tau_e}$. Plugging in the definitions you find the relative error is $\dfrac{|mgR - m(g-a)R|}{m(g-a)R} = \dfrac{a}{g-a}$. Now you can use $a = \alpha R$, and plug this $a$ into the formula. Since the formula $\dfrac{a}{g-a}$ is a lot simpler than $\dfrac{|mgR - m(g-a)R|}{m(g-a)R}$, it should be a lot harder to make a mistake.