Is it possible to build a thermoelectric nuclear power plant?

Current nuclear power plants are essentially an enhanced version of a kettle, which seems like a stupidity caused by a lack of other options. We heat the water which turns to steam which rotates the turbine, which is total waste of energy due to the several conversions.

I googled a bit and found that actually there exists the thermoelectric effect which allows for converting heat to electricity directly. Yes, I didn't know about it until today. ;)

Is it possible to turn the heat from the nuclear reactor directly to electricity? Have there been any attempts to do it?

I am not asking why we do not use it currently, my question is about whether it's possible in principle and whether anyone has tried it.

The efficiency of a thermoelectric generator is around 5 - 8%.

The efficiency of a large steam turbine power plant aproaches 40%.

In fact the thermodynamic efficiency of a large steam turbine power plant is over 90%, so it's about as efficient as anything could be. The maximum possible efficiency of a steam driven engine is given by the idealised model called a Carnot engine. The efficiency is ultimately limited by the difference in temperature of the hot and cold ends of the engine, and modern power plants get pretty close to this theoretical maximum.

my question is about whether it's possible in principle

The answer is yes.

and whether anyone tried it.

The answer is by all chances, no.

The thermoelectric effect for electricity generation (called the Seebeck effect) is the phenomenon that a voltage is generated at a temperature different across the ends of a conductor:

where $S$ is the Seebeck coefficient, a material propety. All we need is a temperature difference - that is, a hot and a cold source. Said in other words, any hot source and any cold source. So sure, if you have a hot source which nuclear certainly is, and water cooling which is a usual method for nuclear power plants, you just need a material that has good properties in this temperature range.

But here comes the problem. The search for and research in thermoelectric materials is the brake in this field. We simply do not have good enough materials at the moment. The topic still feels new, though discovered some hundreds of years ago, and the best materials at present are still those that were found in the 1950's. We are improving and improving, but the efficiencies are simply too low compared to any other source.

I do not know the typical efficiency of a nuclear power plant. But a diesel engine as an example is at about 40% and is one of the most efficient practical engines existing and in use today.

Now, the maximum efficiency of thermoelectric devices is given as:

where $T_H$ and $T_C$ are hot and cold end temperatures, and the Carnot efficiency is $\mu_{Carnot}=\frac{T_C-T_H}{T_H}$. The $\mu_r$, called the reduced efficiency or conversion efficiency, is maybe realisticly at around $10\%$, while the Carnot could be at maybe $60\%$ - multiply them together, and the maximum efficiency $\mu_{max}$ is simply too low.

It all comes down to the so called figure of merit $ZT$, given as:

For present state-of-the-art materials it is only at around 1 to 1½. I am myself working with the alloy Bismuth Telluride, the best material at the moment in the lower temperature range around room temperature to 100-200 degress C, of which the higest $zT$ achieved is $zT \sim 1.45$ It is usually stated that it needs to reach around 3-4 for a material to be usable in industry. See the graph of the $\mu_r$ below showing the value for different $ZT$s at varying temperature. 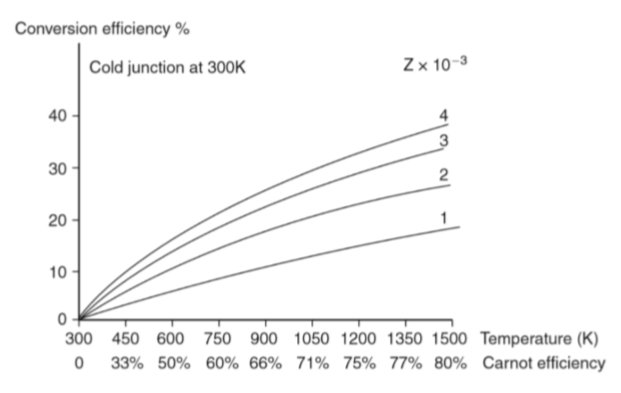 The problem is mainly the issue of reducing the thermal conductivity $\kappa$. This is mainly material science and a material problem, we need to overcome - but I fully agree that this physical phenomenon must have a huge potential at some point.

So, I do not know if anyone ever tried putting it into a nuclear power plant. But I really don't think so. Whenever better materials are found, it will take years for them to be integrated into largescale plants.

In principle, the drop in the Gibbs energy when the uranium gets converted to the fission products is available for doing useful work. While a steam engine will not come close to the maximum possible efficiency attainable (which is very close to 100%), a thermoelectric device will have much worse performance, as pointed out in detail in the other answers. The only way you could really get close to the almost 100% theoretical efficiency is to utilize the kinetic energy of the fission products directly, instead of capturing the energy that results from that kinetic energy being dissipated into heat first.

People do not normally call these things "nuclear power plants", but they are definitely a type of nuclear power generation.

Lockheed Martin makes an LH3 and LH8 that are thermoelectric nuclear power generators. You can by new or used. You have to get the fuel from DoE or the Russians.

Not the answer you're looking for? Browse other questions tagged power nuclear-engineering thermoelectricity or ask your own question.

30
How would a black hole power plant work?
6
Gaseous fission: Has it even been demonstrated experimentally?
1
Intensive radiative heat transfer in very hot gas ( >5000K, gas core nuclear reactor related )
1
Can antimatter be used as fuel for nuclear reactors?
7
Optimal speed for the water wheel
1
Why do coal power stations not directly use combustion to turn the turbines?
0
Is there any significant scale nuclear transmutation currently in practice?