How can we see objects that are so far away? [duplicate]

The HUDF used to be the deepest image of the universe ever taken by the Hubble telescope, the furthest star in this image is 59000 light years away.

The star in question: 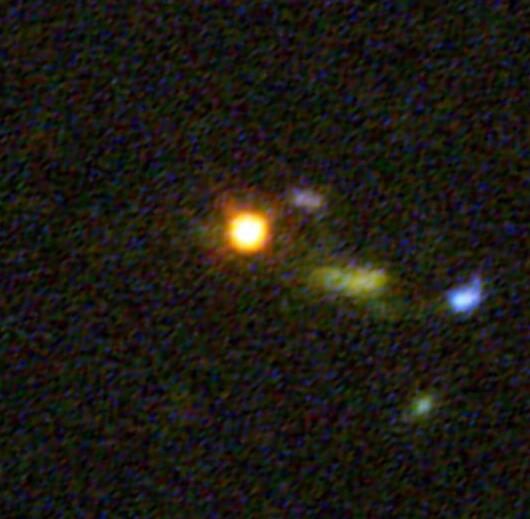 Now Imagine a light emitting object like a star and an observer like a telescope, 59000 light years apart. I represented everything in 2D, but in 3D I suppose it would be the same but with spheres:

Now picture the photons that the object is emitting, in particle form. They will all have one direction and they will go towards this direction at C, given that there are no massive objects in between their paths: 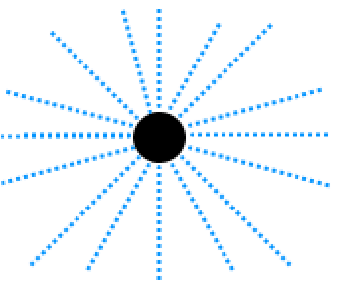 Notice how the photons have separate paths, because they have different directions, now obviously there should be a lot more photons but for simplicity I drew it like that. My point is, given enough distance shouldn't the probability of hitting a photon be so small that seeing an object becomes nearly impossible? Like so:

Here the observer can detect the photons, but if it was slightly off it wouldn't:

So how can we detect objects so far away? Is there something about light's wave form that I'm not considering, is this how light is emitted at all?

2- This isn't really how photons are emitted, instead a quantum field is spread out radially and we only detect the photon when we interact with the field.

Does this mean that there are objects that we can't see, even if given enough time for the light to reach us (presumably outside of the current observable universe)?

Or do the gaps not exist at all because of answer number 2?

There are photons traveling in all directions, not just the dozen or so you show. The further from the source the telescope is, the smaller the amount of solid angle it covers and the fewer photons it will gather. A $1 m^2$ telescope pointed at the sun will receive about $1.4 kW$. Taking a typical photon energy of $2 eV$ that is about $4.2E21$ photons/second. Move the sun to $1,000,000$ light years and it is $6.3E10$ times farther, so we will get a factor $(6.3E10)^2$ less photons, but that is still about one per second.

Not the answer you're looking for? Browse other questions tagged optics photons astronomy distance or ask your own question.

56
Photons from stars--how do they fill in such large angular distances?
2
How can the Hubble telescope see the light from galaxies that are millions of light years distant?

11
Why is there a photon every millimeter on earth coming from a star millions of light years away?
16
How would we see a near-lightspeed object emitting light?
11
Some doubts about photons
1
Why does the light intensity increase as I approach a distance light source?
0
How far back can you trace a photon?
0
How can we see stars and galaxies if photons are travelling straight?
1
Inverse-square relationship and seeing stars from far away: Is there maximum distance from which we can see a star?
0
Does the circumference of light from a star expand?
1
How far away are distant objects really?