Why does the water rise?

It's a very popular experiment (eg), from elementary school : put a burning candle on a dish filled with water, cover the candle with an inverted glass: after a little while, the candle flame goes out and the water level inside the glass rises.

The standard explanation (as I recall it) was that combustion "burns" oxygen, and the consummed volume accounts for the extra water that goes inside the glass. Is this correct? I remember feeling (years later) uncomfortable with the explanation, because "to burn" is certainly not "to dissapear": I thought that oxygen combustion produces (mainly) $CO_2$ and hence one oxygen molecule would produce another $CO_2$ molecule, and the volume would remain basically the same. Perhaps $CO_2$ dissolves into the water? I would doubt that.

To add to my confusion, others state that the main cause is not the oxygen combustion but the changes of air temperature, that decreases when the flame goes out and makes the air inside the glass contract... which would rather invalidate the experiment as it was (and is) traditionally taught to students.

What is the right explanation? 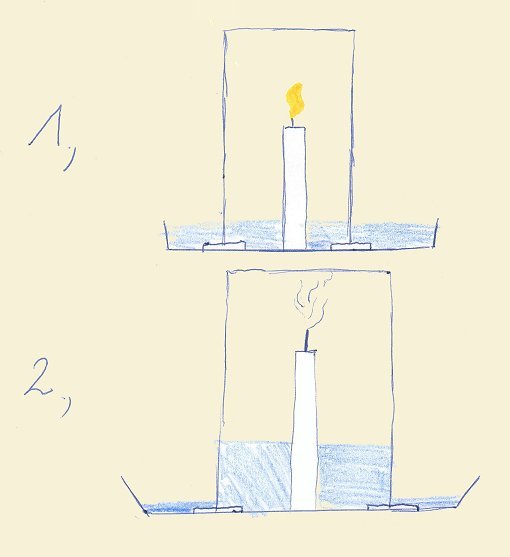 Update: As from webpage linked in accepted answer, there are several effects here, but it's fair to say that the "traditional" explanation (consumption of oxygen) is wrong. Oxygen (plus paraffin) turn into $CO_2$ (plus water) (a representative reaction: $C_{25}H_{52}+38O_2 \to 25CO_2+26H_2O$ ). This would account for a small reduction in volume ($25/38 \approx 2/3$), even assuming that this is the complete chemical picture (it's not) and that water condenses ($CO_2$ dissolves in water poorly and very slowly). The main cause here is thermal expansion-contraction of air.

I found two web pages that explain the phenomenon quite well, and even looks into the misconceptions people have.

The candle flame heats the air in the vase, and this hot air expands. Some of the expanding air escapes out from under the vase — you might see some bubbles. When the flame goes out, the air in the vase cools down and the cooler air contracts. The cooling air inside of the vase creates a vacuum. This imperfect vacuum is created due to the low pressure inside the vase and the high pressure outside of the vase. We know what you're thinking, the vacuum is sucking the water into the vase right? You have the right idea, but scientists try to avoid using the term "suck" when describing a vacuum. Instead, they explain it as gases exerting pressure from an area of high pressure to an area of low pressure.

A common misconception regarding this experiment is that the consumption of the oxygen inside of the bottle is also a factor in the water rising. Truth is, there is a possibility that there would be a small rise in the water from the flame burning up oxygen, but it is extremely minor compared to the expansion and contraction of the gases within the bottle. Simply put, the water would rise at a steady rate if the oxygen being consumed were the main contributing factor (rather than experiencing the rapid rise when the flame is extinguished).(1)

The page from Harvard goes into more detail on the argument versus the error for the incorrect statement.

Argument: Oxygen is replaced by Carbon dioxide. So, there is the same amount of gas added than taken away. Therefore, heat alone most be responsible for the water level change.

Source of the Error: A simplified and wrong chemical equation is used, which does not take into account the quantitative changes. The chemical equation has to be balanced correctly. It is not true that each oxygen molecule is replaced by one carbon dioxide molecule during the burning process; two oxygen molecules result in one carbon dioxide molecule and two water molecules (which condense). Remember oxygen is present in the air as a diatomic molecule. [A reader clarifies the water condensation in an email to me as follows: If the experiment were done with the sealing fluid able to support a temperature greater than 212 F and the whole system held above this temperature then the water product of combustion would remain gaseous and the pressure within the vessel would increase as a result of three gaseous molecules for every two prior to combustion and the sealing fluid would be pushed out.]

Argument: Carbon dioxide is absorbed by the water. Thats why the oxygen depletion has an effect.

Argument: The experiment can be explained by physics alone. During the heating stage, air escapes. Afterwards, the air volume decreases and pulls the water up.

Source of the Error: the argument could work, if indeed the heating of the air would produce enough pressure that some air could leave. In that case, some air would be lost through the water. But one can observe that the water level stays up even if everything has gone back to normal temperature (say 10 minutes). No bubbles can be seen.

Argument: It can not be that the oxygen depletion is responsible for the water raising, because the water does not rise immediately. The water rises only after the candle dims. If gas would be going away, this would lead to a steady rise of the water level, not the rapid rise at the end, when the candle goes out.

Source of the Error: It is not "only" the oxygen depletion which matters. There are two effects which matter: the chemical process of the burning as well as a physical process from the temperature change. These effects cancel each other initially. Since these effect hide each other partially, they are more difficult to detect. (2)

It clearly has more to do with the temperature differences than any conversion of gases. Especially considering that a volume of oxygen and carbon dioxide will be nearly identical to human eye observation.

I have not actually tried this experiment, but I will make at least a few observations:

Hypothesis 1: The burning of oxygen is responsible for the reduced air pressure.

Prediction - if the burning of oxygen is the sole cause of the change in pressure, we should expect to see the water in the glass rise at a more or less constant rate from the moment the environment is sealed until the burning stops. After the candle extinguishes, there should be no more change in water level.

Hypothesis 2: The reduction in temperature after the candle extinguishes is responsible for the reduced air pressure.

Prediction - if the temperature change is the sole cause of the change in pressure, we should expect to see no change in water level while the candle is burning (in the limit that the glass was lowered very slowly). After the burning stops, the water should rise at a rate related to the temperature drop and eventually stop as the experimental setup comes to room temperature.

In order to test which explaination is correct, you should be able to merely perform the experiment and match the observation with the prediction. Of course, in real life it may be a combination of these two factors or perhaps include other reasons not listed here.

Additional measures such as putting an oxygen indicator in the glass (say a fresh slice of apple) or a thermometer would provide further insight.

I will make this into an answer because the idea behind this question is used in an ancient medical method which was still used by practical nurses and even prescribed by old fashioned doctors when I was a child more than half a century ago in Greece. It is now used in alternative medicine practices

I think it was the invention of antibiotics which diminished rapidly its use, which was mainly for bronchitis pneumonia and similar afflictions, at least in Greece.

As far as the question goes, no liquids to confuse the issue of its being a strongly temperature dependent effect.

Not the answer you're looking for? Browse other questions tagged water home-experiment physical-chemistry or ask your own question.

20
How far can water rise above the edge of a glass?
2
Temperature of thermochemical reaction between propane and nitrous oxide
9
Water evaporation problem. Exercise from Feynman's lectures
3
Why water boiling time depends linearly on water volume?
8
Why does warm water sink?
1
Why does a glass bottle completely filled with water not break when hit on a nail?
1
Water Bottle Condensation
83
Why doesn't water actually perfectly wet glass?
0
Will water in a vacuum chamber become cold fast after being heated?
1
Why will the water not overflow when ice melts?