Why CAN we see the new moon at night?

I understand that the Moon's phases are determined by its position in orbit relative to the Sun. (See: Full Story on the Moon). The "shadow" is not cast by the Earth (a common misconception - this is actually a lunar eclipse), but by the moon's body itself.

It would appear that, in order for the moon to be a new moon, it would have to be somewhere between the Earth and the Sun. However, it would seem that, if we were looking at a new moon, we'd necessarily be looking at the Sun as well.

Why, then, can we sometimes see a new moon at night? Why doesn't it vanish at night for a half-month every month, between its last/first quarters?

I stumbled across this question, and while it is an old question and there are some halfway decent answers, I think it deserves a more in-depth response. I completely understand the question, which I think is am excellent question. Trying to understand the phases of the moon is much more difficult than most think.

The short answer of it is that you cannot see a new moon at night. A new moon is not in the sky at night! It rises with the sun and sets with the sun.

Now then, to more adequately address and answer your question, let's first take this simple demonstration of a girl rotating around in circles while holding a "moon" in front of her with a lamp (sun) in the distance: 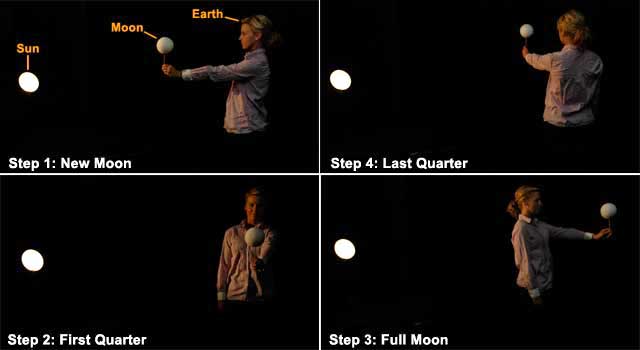 The reason the demonstration fails is that during a true new moon, when the moon is between the Earth and the sun (during the day), we can't see the moon because the sun is too bright. In other words, although in the demonstration the girl can see her "moon"...we can't see ours. For her demonstration to be more accurate, her "moon" would have to be a LOT smaller and the lamp would have to be MUCH brighter. And if the lamp were much brighter...even blindingly bright, then she would not be able to see her small "moon" either.

Although, if the moon passes exactly between the sun and the earth during the day, then we have a total solar eclipse. And during that brief moment, the moon blocks the sun and shades the earth...and we can see the outline of a new moon: 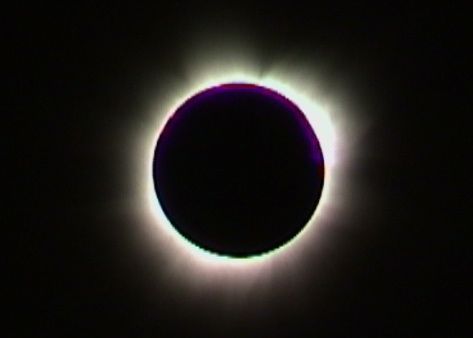 Failure #2 (and the answer to your question): The demonstration fails because the girls is always facing the moon. In reality, this is not so. The Earth rotates, of course. So, for the demonstration to be more accurate, her head would have to be impossibly rotating completely around 360 degrees, continuously. Furthermore, her head would be rotating about 30 times as fast around in circles as her body.

In other words, during the "new moon" phase (Step 1), when her body is facing the lamp (sun) with her arm holding the moon out in the direction of the lamp (sun), imagine her head revolving around 360 degrees.

Now then...as her head rotated around, and out of the corner of her eye (in the Eastern horizon), she would begin to see the moon and sun at the same time (i.e. during sun and moon rise in the morning), then they would appear together...be in the sky together all day...and set together out of the corner of her eye, again at sunset. In the demonstration, she would be able to see the ball and the lamp, but in reality, the sun is so bright that the moon can't be seen in the sky...even though the new moon is in the sky all day long.

Contrarily, a new moon rises early in the morning (with the sun) and sets at night (with the sun)...and is not visible at night, at all.

This website is very helpful in its descriptions, as well: http://earthsky.org/moon-phases/new-moon

Well, I'd like to say that you are almost there. The key point of this question is to know that usually illustrations are just showing the relative positions but not with the real ratio. If the size and distance of the moon is the same as such pictures show, it will much harder to find when it lies at the same side of the sun. Because to see it, the smallest position angle from the sun is $\alpha = (R_E+R_M)/D_{EM}$ .Then it will vanish more days every month as you say. 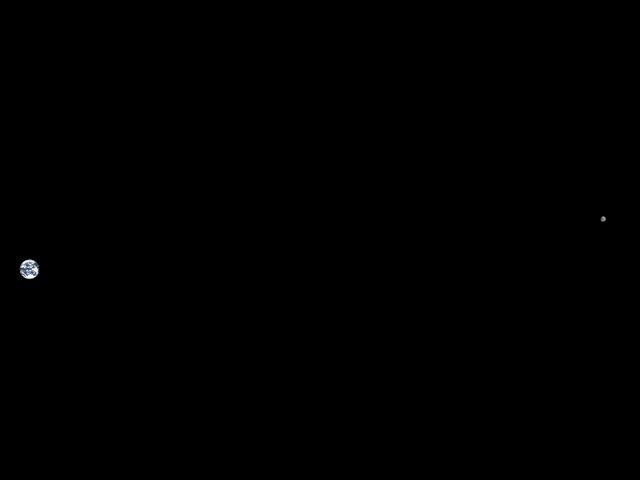 Imagine for a moment that you are standing on the Earth facing surface of the moon at new moon. What do you see in the sky? You see the Earth and in its full phase. The Earth has 13 times the area of the moon, and three times the albedo: that sucker is bright.

So: the "dark" side of the moon is illuminated by earth-shine, and on a clear dark night you can see it. Of course, you have to manage this just at full dark or just before dawn.

NB: If you live in the city you will have to take a drive into the country and wait for your eyes to adjust.

The new moon isn't directly inline with the sun -if it was it would be a solar eclipse. So the new moon is only near to the sun (within several degrees), if the moon is several degrees behind the setting sun, the sun sets while this "new moon" is still slightly above the horizon. Roughly everyday after the new moon the moonset is about an hour later. By the time it gets to be a quarter moon moonset comes near midnight.

I'll just add that during the solar eclipse you can actually see "brand new" moon.
Backlit.

There are two reasons a new moon can never be seen at night. The first is that by definition, new moon means 100% of Moon's unilluminated side faces Earth. The second is that when the first condition is met, Moon is sufficiently close (in angular separation) to Sun that it cannot be above the horizon at local nighttime.

Now, there is a slight technicality to the first condition. The only time that 100% of Moon's unilluminated side truly faces Earth is during a total solar occultation (it's not an eclipse because...see the next paragraph). At all other occurrences of new moon, there is indeed a very slight defect in illumination, but I've never seen it captured in an image and thus I strongly suspect it's too slight to be observed. So even when the first condition is truly met, Moon must be in at the same place relative to the horizon as Sun and cannot be seen at night.

Finally, the word eclipse implies one object standing in the shadow of another object. In what is traditionally, and incorrectly, called a solar eclipse, Earth is in Moon's shadow. Thus, it is Earth that is actually eclipsed, not Sun. There is an astronomical term for one object physically blocking light from another object, and that term is occultation. Therefore, this phenomenon is really a total solar occultation, not a total solar eclipse.

You can't see the moon during the new moon phase because the sun, moon, and earth are in a line in that order so the sun is lighting up one side of the moon and the side facing earth is shadowed and can't be seen./Users/randyhopkins/Desktop/Photo on 1-13-14 at 5.50 PM.jpg

10
Why don't we see solar and lunar eclipses often?
41
Why is a new moon not the same as a solar eclipse?
11
Why did the june 2011 lunar eclipse last so long?
2
Why are Lunar Eclipse more common than Solar Eclipse?
2
Why does the red light from Sun bend towards the moon during the total lunar eclipse?
1
Why is a gibbous moon possible?
0
When it's noon on the Moon, then what time is it here?