"Center of a black hole is a time"

$\newcommand{\d}[1]{\mathrm{d} #1}$In one lecture (around 1:33:15) of the series of lectures "Theoretical Minimum" of Prof. Susskind he talks about black holes and the Schwarzschild metric:

He says that there is nothing funny going around for $r<r_s$ because both $\d t^2$ and $\d r^2$ term changes sign. I'm perfectly find with this but then he says whilst discussing about black holes that "$\;r=0$ is not a place but more like a time and that's why you can't avoid falling into black hole. You can't avoid the future."

The Schwarzschild metric as you've written it is only one particular coordinate system and the fact that $r$ and $t$ switch roles at the event horizon is an artifact of that coordinate system. There are other coordinate systems which make certain properties of the metric more intuitive. The ones that might be most useful for you are ones which can be drawn as a Penrose diagram. In a Penrose diagram time is always up and radius is always side to side and light always travels at 45 degrees. On the diagram of a black hole you can see that the event horizon is just the point where all light (and therefore everything) must hit the singularity because the singularity encompasses all of its possible future positions.

As an aside, note that Schwarzschild coordinates are perfectly valid strictly inside the horizon as well as strictly outside, just not on the horizon itself; thus we cannot use them if we want to describe processes that evolve from the exterior to the interior.

Now $g(\partial_r,\partial_r)$ is a coordinate-independent quantity so it doesn't matter what coordinates we use to calculate it in the interior. We find in said interior that $g(\partial_r,\partial_r) < 0$ meaning the vector field is time-like. Thus the surface $r = 0$, which is a level set of the vector field, is a space-like surface (a space-like surface is by definition orthogonal to a time-like vector field). What this means is the singularity $r = 0$ is a moment in time as opposed to a point in space.

This is analogous to looking at a $t = \text{const.}$ surface in, say, a global inertial frame in flat space-time and interpreting it as the simultaneity surface of the family of inertial observers at rest in the frame, with clocks that are all synchronized. However it should be noted that in the Schwarzschild black hole interior, the family of observers corresponding to the $\partial_r$ vector field can't synchronize their clocks if said clocks are set to read proper time because of the relative motion of these observers; they would have to adjust their clocks accordingly.

If you plot a continuous curve in spacetime, it could be a path of a body if the tangent to the curve exists and has positive squared interval.

So outside the event horizon your curve has to have t change more than the others, so in particular t has to change and get larger.

Inside the event horizon your curve has to have r change more than the others, so in particular r has to change and get smaller.

The Schwarzschild solution isn't clear about the horizon itself because the coordinates themselves break down there. However there other coordinate systems that are not weird there that make the same predictions inside and outside the horizon and you can track where thing that are outside go when they go through. If you do, the curves of decreasing r on the outside become curves of decreasing r on the inside.

As for why it stays decreasing. We have to have r change (because it has to change more than the other coordinates to have a positive tangent). And since there is one + and three - there isn't room for a changing and decreasing r to turn around into a changing and increasing r.

The same thing happens with time outside the horizon there is a cone of time increasing more than space changes and a cone of time decreasing more than space changes but they only interest where space doesn't change at all. If you insist that time changes enough more than space that you get a positive tangent then you have a hyperboloid of time increasing and a hyperboloid of time decreasing and they don't intersection. So for positive unit tangents there is no way to get from one to the other on a continuous way.

Outside this means things don't start going backwards in time so it doesn't seem weird. Inside this means that if r is decreasing then it can't change to start increasing or even staying the same.

So the same reasons you have to go to the future when outside make it so that you can't increase your r when you are inside.

The equations for the inside might look less mysterious if you wrote r as t and vice versa, but they would be more complicated. Since there is a symmetry in t where the metric doesn't depend on t. So since the metric doesn't depend on t it gets a nice simple form when everything is written in terms of r. However r is your time on the inside so the metric will start crushing dynamically the $r^2 d \Omega^2$ now just makes an angular coordinate separation becomes closer and closer dynamically as the incoming curve extends. The t coordinate represents a different direction you can turn around in but all three spatial coordinates don't affect the metric, so the metric changes dynamically and there is nothing you can do about it.

He says that there is nothing funny going around for r < rs because both dt² and dr² term changes sign. I'm perfectly fine with this

You shouldn't be. When you aren't happy with some conclusion you should go back over everything with a fine tooth comb. Examine your assumptions, check your postulates, look closely at the things you've taken for granted.

but then he says whilst discussing about black holes that "r=0 is not a place but more like a time and that's why you can't avoid falling into black hole. You can't avoid the future." I really don't understand the above statement.

Of course you don't. Because it doesn't make sense. It's supposed to be general relativity, but IMHO when you read the original material you come to the conclusion that it can't be. Read the second paragraph here. Also look at some of the "other coordinate systems" Timaeus referred to. See for example the history section of the Wikipedia Schwarzschild metric article, and note this:

That infinite coordinate time means it hasn't happened yet, and it never ever will. Have you ever read The Elephant and the Event Horizon? It features Susskind, wherein "if his calculations are correct, the elephant must be in more than one place at the same time". Now take a look at this Schwarzschild-coordinate illustration from MTW. Imagine the light-cone is the elephant: 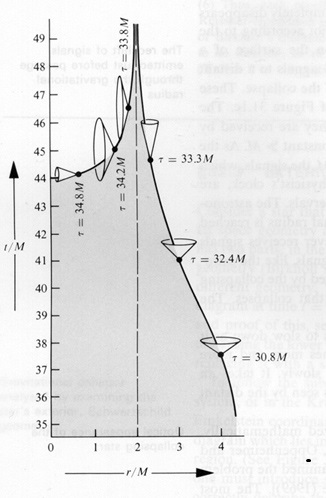 Note the t on the left? See how the picture is chopped off at the top? What's happening here is that at r=2M the elephant goes to the end of time and back. Draw a horizontal line at about t/M=45 and trace across from right to left. The elephant is there at τ = 33.3M, and it's there again tilted 90 degrees over at τ = 34.2M. It's in two places at once because it's gone to the end of time and back!

I don't know what Einstein would have thought of all this, but I suspect he would not be impressed, because he said this: "As a simple geometric consideration shows, a curvature of light rays occurs only in spaces where the speed of light is spatially variable". And what's the speed of light at the event horizon? Zero! It can't go lower than that. Which means there's no gravitational force at the event horizon, that the singularity at r = rs is not a coordinate artefact, and that that's where the coordinate system stops. You can't get past this by adopting a new coordinate system, because light has stopped. That's why the vertical light beam can't get out. That's why it's a black hole. And of course, you can't go faster than light. All of which yields a very different picture, a simpler picture, where there is no magic or mystery. Make sure you read The Formation and Growth of Black Holes where Kevin Brown refers to two GR interpretations, one of which is the frozen-star interpretation. He doesn't like it, but I do. It's Oppenheimer's original frozen star black hole. And I think it's correct.

1
Black Holes: How does a three dimensional object collapse into a singularity & Where does the matter go?