Can negative friction exist? If so, what happens?

I have to talk about negative friction for my oral exam and I would like you to comment my presentation.

I know that friction is the resistance to motion that occurs between objects. So friction is a force that work opposite the direction you rub an object against another object.

And we said that friction works like a brake so the kinetic energy will be transformed into thermal energy or just heat.

So what happens if the friction is negative?

If the friction is negative then the direction will be the same as you rub an object against another object.

Then I was thinking that the kinetic energy will increase because the speed $v$ will increase. In this case you will get more energy as output than you actually put in. According to the first law of thermodynamics, you cannot get more than you put in. So it it not possible.

Am I correct? And are there more to say 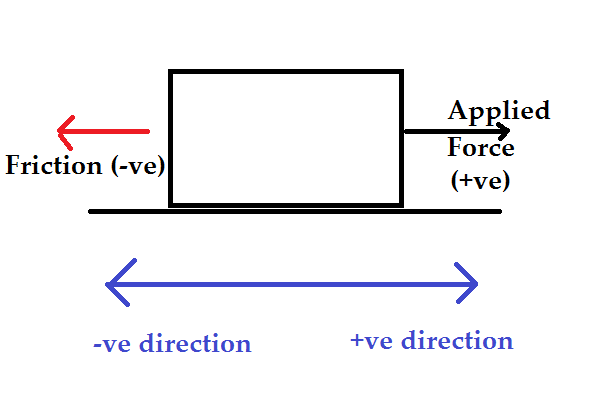 Reason for friction force being opposite to the relative motion of the objects. When two surfaces are in contact, there are many irregulaties in the surface. The actual area in contact is much smaller than what it seems to be. Where the surfaces join, the molecules of the surface attract each other [This is due to various intermolecular forces, like dipole- dipole interaction, Van Der Vaals forces, Hydrogen bond, etc]. So when one surface tries to go ahead, the attractive forces prevent it to some extent, and that is what we see as friction. If one surface tries to move to the left, attractive forces try to keep it at the same place, and we can see it on a macroscopic level as friction acting towards the right. So the friction is always opposite to the motion of the objects.

You can get more details about the origin of friction on the wikipedia article about friction.

You are correct. Kartik's answer is also correct, but he just didn't directly answer your question (well, to be fair, it presupposes a complete rewriting of the laws of physics). A positive coefficient of friction opposes the direction of applied force, reducing or preventing movement. With a stationary object, the force is called static friction, and for a sliding body it is sliding friction. Static friction is normally greater than sliding friction, and until the applied force is greater than the static friction the object will not move at all.

If the coefficient of friction were negative, it would increase the total lateral force, and there would be nothing to prevent motion. Not only that, but as soon as the tiniest motion began, the object would experience a constant accelerating force proportional to its weight. In the absence of aerodynamic drag the object would accelerate without limit. Given a long enough track it would reach relativistic speeds.

The above explanation is generally correct: usually there only exists positive friction and frictional force is always in the direction opposite of the direction of motion. However, that explanation considers only positive coefficients of friction. There has been recent (2013) research with graphite that demonstrates a negative coefficient of friction. This experiment consisted of a diamond atomic force microscope (AFM) tip performing force measurements on bulk graphite. Researchers found that the frictional forces between the diamond and graphite increased with decreasing load (negative slope in a Force vs. Load graph, which I think may be an answer to the posted question), discovering the first-ever example of a negative coefficient of friction. The link to a publication in Nano Letters is here:

As we know, F_f=mu*F_N, where mu is the coefficient of friction. If mu is negative, so too is the force of friction F_f.