I have come across a question that asked me to find the radius of curvature of a projectile.

As far as I know, the path of a projectile is a parabola and I have found mention of the radius of curvature referring to lenses and mirrors. But in optics, the lens and mirrors were assumed to be part of a circle.

You might ask what radii of circles have to do with curvature, so it's worthwhile explaining it. This is a parabola: 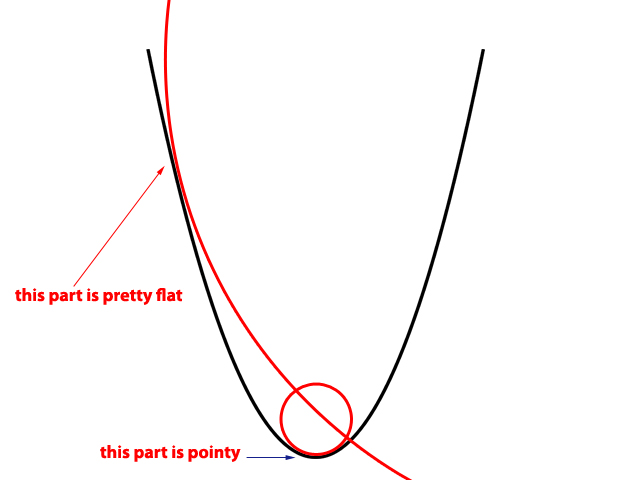 As you can see, the sides of the parabola are pretty flat, whereas its vertex and the surrounding region (i.e.: at $x=0$) have a relatively sharp corner.

So the question is how to mathematically describe this property?

On the other hand, the vertex of the parabola and the surrounding region are relatively sharp and pointy, hence you'll notice it takes a circle with small radius to fit it on this edgy section of the parabola, we say this region has small radius of curvature.

How can a parabola have a center from which radius is to be measured?

No, it does not, but every point on the parabola and and the surrounding region can be regarded as a part of a circle with certain radius.

Does the radius of curvature changes with the position of body(in projectile motion)?

We can draw a tangent (Call it 't') at any point (call it 'p')on a curve. We can also draw a circle to which 't' is a tangent. The radius of this circle is the radius of curvature to the given curve at the point 'p'.

An analogy from motion of a body along a curved path may help easier understanding.

When a body moves along a curved path, its velocity keeps changing. However, we can talk of the instantaneous velocity of the body at each and every point along the curve.

2
Vertical circular motion followed by projectile motion
131
Why would spacetime curvature cause gravity?
2
How are tidal gravity and curvature related?
1
A simple way to measure the shape of warped spacetime
1
Trace of the Riemann Curvature Tensor
1
Projectile, the focus of its parabolic path, and the circle drawn through the focus
0
Non-uniform circular motion with constant radius of curvature