I'm not a quantum physics native, so I do not understand why Victor's data is needed. Can somebody please explain in very simple terms:

For reference, here is a quantum logic circuit that performs entanglement swapping: 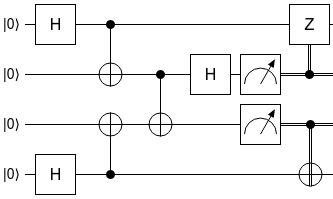 Alice is the top wire, Bob is the bottom wire. They each create an EPR pair $|00\rangle + |11\rangle$ via H+CNOT operations and give them to Victor (the center two wires). Victor then does a Bell basis measurement (by performing operations that un-make an EPR pair then measuring each wire).

(Speaking technically, what I'm saying is that Alice and Bob's qubits on their own are represented by the maximally mixed density matrix.)

But then there's still Victor's measurement results. They reveal which entangled case Alice and Bob ended up in. Victor knows their state's X-parity and its Z-parity. All Victor has to do is tell Alice and Bob "Hey, the Z-parity came out 'disagree' so one of you flip your qubit 180 degrees around the X axis to fix that". Do the same for the X-parity, and the problem is solved: Alice and Bob will definitely end up in the state $|00\rangle + |11\rangle$ after the corrections. That's what the last two controlled operations are doing.