Why can't charge be in a stable equilibrium in electrostatic field?

I am reading Feynman's Lectures volume_II where he discussed the impossibility of the presence of stable equilibrium in an electrostatic field.

There are no points of stable equilibrium in any electrostatic field—except right on top of another charge. Using Gauss’ law, it is easy to see why. First, for a charge to be in equilibrium at any particular point $P_0$, the field must be zero. Second, if the equilibrium is to be a stable one, we require that if we move the charge away from $P_0$ in any direction, there should be a restoring force directed opposite to the displacement. The electric field at all nearby points must be pointing inward—toward the point $P_0$. But that is in violation of Gauss’ law if there is no charge at $P_0$, as we can easily see.

Fig. 5–1.If $P_0$ were a position of stable equilibrium for a positive charge, the electric field everywhere in the neighborhood would point toward $P_0$. Consider a tiny imaginary surface that encloses $P_0$, as in Fig. 5–1. If the electric field everywhere in the vicinity is pointed toward $P_0$, the surface integral of the normal component is certainly not zero. For the case shown in the figure, the flux through the surface must be a negative number. But Gauss’ law says that the flux of electric field through any surface is proportional to the total charge inside. If there is no charge at $P_0$, the field we have imagined violates Gauss’ law. It is impossible to balance a positive charge in empty space—at a point where there is not some negative charge. A positive charge can be in equilibrium if it is in the middle of a distributed negative charge. Of course, the negative charge distribution would have to be held in place by other than electrical forces

I am having problems with the explanation especially the bold lines. It can be comprehensible that to be at equilibrium at $P_0$, the force i.e. the field must be zero. There must be a restoring force in order to bring back the charge at $P_0$. Feynman then wrote that as there is no charge, it cannot have any net flux as is evident from the bold lines. Confusion! Where did the charge go that he was discussing so far? He only displaced the charge , previous at $P_0$ away from $P_0$. That doesn't mean the charge is no more inside the surface!! I am really not getting what/why he wrote if there is no charge at $P_0$. Can anyone help me clear this confusion?

Also, if the field is zero, doesn't it mean that flux is also zero? If not, why?

I am posting this because I believe none of the the other answers address the OP's question. The answer is already in the text by Feynman but somewhat implicitly.

Q: What do we mean by stable equilibrium?

In electrostatics all forces can be expressed in terms of electric fields. A charge $q$ will experience a force

For the particular case of our charge $q_+$ the force points towards the same side as the electric field.

We can now start with the assumption that $P_0$ is a point of stable equilibrium for $q_+$. This means that there is a restoring force in some neighborhood $V$ of $P_0$ inside of which, at every point $Q$, the electric field $\overrightarrow E$ points from $Q$ to $P_0$. If we apply Gauss's law to such a system we get

where $S$ is the boundary of the neighborhood $V$. But if we look at the left side of the equation we see that $\overrightarrow E$ points inwards whereas $\overrightarrow n$ points outwards (as per the convention for normal vectors to a closed surface). This means that the integrand is always negative and so the integral is as well.

A negative number cannot be equal to a positive number! Therefore, by reductio ad absurdum we conclude that $P_0$ cannot be an equilibrium point. Our starting assumption was wrong.

With the legwork we have done here we can also expand one of points Feynman makes. The text reads

except right on top of another charge

If there are several charges, and they are at different points in space we can always find a volume inside of which it is isolated and as we saw above, this can never be a point of stable equilibrium. But if two charges $q_1, q_2$ are right on top of one another then no matter how small a volume we take the right hand side of the equation will always be $(q_1+q_2)/\varepsilon_0$.

So, if our charge $q_+$ sits right on top of a negative charge $Q_-$, and $|Q_-|>q_+$, then is in stable equilibrium because Gauss's law does allow it this time (both sides are negative).

With this we can expand Feynman's claim to:

There are no points of stable equilibrium in any electrostatic field—except right on top of another charge of opposite sign and higher value.

He talks about imaginary situation when there is a point in space with stable equilibrium.

As Feynman says, it requires $E=0$ at some point $(P_0)$ and all $E$ vectors looking inwards (like local minima) around that point. Then let's use Gauss's law: compute flux. It will definitely be not zero, which means that such point does not exist.

What is doable is a spherical shell with some charge and same sign charge in its middle. You enclose your centered charge with surface. Now there is field from the shell and from the charge crossing it. Bo-ya, this field has non-zero flux through the surface.

The answer from "introduction to electrodynamics" Have a look at that problem.

The answer-from solution manual- :A stable equilibrium is a point of local minimum in the potential energy. Here the potential energy is qV . But we know that Laplace’s equation allows no local minima for V . What looks like a minimum, in the figure, must in fact be a saddle point, and the box “leaks” through the center of each face. 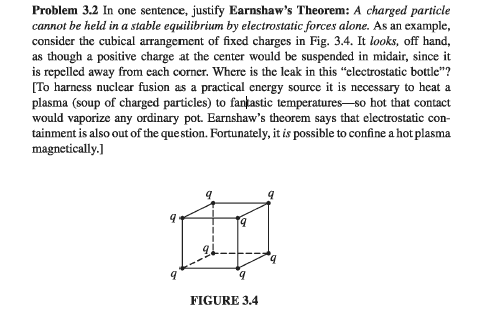 Here Feynman is discussing the field produced by the presence of several static charges. Then he is considering a point P in this field. Please understand that "there is no charge at P". Then he says that if we calculate the divergence of the field from this point P and if the divergence comes out to be negative, then the point P will be an equilibrium point. (Then he says that the above situation is impossible since that violets The Gauss law)

Mathematical description of Equilibrium: Divergence of the field at P is negative

Intuitive understanding of Equilibrium: A test charge at P, would not move and if displaced by a little distance in any direction it would come back to the same position P again.

So the idea of placing a test charge at P is only to make us visualize "the situation of equilibrium" by studying "the characteristics of the motion" of this charge.

3
Earnshaw’s Theorem and Ring of Charge
0
Explanation of the negative integral
0
Dilemma of classical physics: stationary particles that can't be in stable equilibrium

3
Gauss Law with a hollow asymmetric surface
1
Electric field in conductor at equilibrium: explanations seem to be lacking
0
Charge distribution: electrostatic equilibrium in conducting sphere
0
Unstable equillibrium of a charged rod in an electrostatic field
0
Explanation of the negative integral
2
Earnshaw's Theorem in Chemical Bonds
0
Feynman's proof that field is zero in cavity of conductor
0
Why the electic field in the overlap region of solid sphere is not zero?