Two questions about the nature of induced emf

I have two questions about magnetic induction (I am in university level introductory E and M so maybe my questions will be answered over the next few years):

In the linear generator (shown below), I understand that a changing magnetic flux causes an induced emf, which causes a current to flow, and therefore a magnetic force opposing the hand pulling the wire. The magnitude of the opposing force is $\frac{B^2L^2v}{R}$.

Then the book discusses power output, by assuming constant speed (ie. the force of the hand is also the above so that v stays constant and no net force). You get a power = Fv from the hand, and you get a power output from the resistance. These turn out to be equal to $\frac{(BLv)^2}{R}$, so the book concludes that conservation of energy is at hand. But doesn't the opposing magnetic force also have a power output? We've only equated the force of the hand and the resistance of the loop but haven't said anything about the power caused by the magnetic force opposing the motion.

My second question is this: The book imagines a large region of uniform magnetic field that is changing with time. Then an imaginary loop of radius R is drawn in space. By using Faraday's law and some symmetry we work out that the induced electric field at any point on that loop must be $E=\frac{R}{2}\frac{dB}{dT}$, directed tangentially to the loop. However, if we draw another identical loop tangent to that first one, we get the same magnitude but in the opposite direction. Which emf is correct? 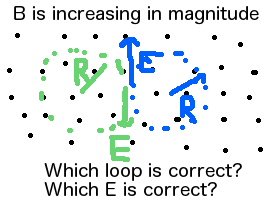 First, keep in mind that many textbooks give incorrect definitons. An EMF is not work done per unit charge. An EMF depends on your loop, and it is the force per unit charge dotted with the instantaneous direction of the wire. Whereas work would require you dot with the direction the charge is going.

Next, now that we know about work and EMF we have to consider which forces are responsible for an EMF. They could be electric forces, or they could be magnetic forces.

When the wire is thin and stationary (the loop doesn't move), then the velocity of the charges has to be in the direction of the wire and hence the magnetic force is orthogonal to the direction of the wire, so contributes zero to the EMF, so the EMF is entirely electric. That's what happens to a stationary loop in a non conservative electric field, which is associated with the rate the magentic field is changing in time (but is independent of the current value of the magnetic field).

If you want to track how the hand is involved, the hand grabs the solid loop and pulls it, and since there are charges in a solid matrix they are bound to each other and that drags the whole collection of charges bound in that matrix, which I'll call matrix charges (which isnt a standard term, but I worried that bound charges could be confused with another term that is standard). And the loop has more charges than just matrix charges, it has mobile charges too. Imagine four protons on the corners of a square that stay square corner shaped and four electrons that move along the square but are only sometimes at the corners. The matrix charges are like the four protons at the corners and the mobile charges are like the four electrons moving along the sides the of the square. A real wire has more protons, a large number, and the large number of protons have a large number of electrons that stay with them, so only a few of the many electrons are cruising around.

If you worry this seems overly complicated, I bring up all these forces only because you wanted to know what is causing what.

Matrix charges do exert forces on charges. So let's start with a stationary example. For instance, when current flows around a corner the mobile charges feel a force from the matrix charges to accelerate around that corner. You have actual surface charge imblances on the outsides of the wire and particularly at the bend of the wire that exert forces on electrons that point in the direction to make them turn the corner, and that have a magnitude such that when you go at the drift velocity you get the force required to turn (you actually also get some from the surface charge to overcome the resistance, but the resistance is just another force from the matrix charges). So the matrix charges exert a force on the mobile charges so they can turn the corner and the equal and opposite force the matrix charges feel would cause them to go the opposite direction but the material is strained in that direction, giving a stress that counters that force. This is like if you magically attached one electron each to each end of a spring. The spring would be stretched a bit so the spring force countered the electrostatic force. In this case the matrix expands a bit so each bit is a feeling stress pushing itself inwards, but they feel an outwards force from the mobile charges, so in the end the mobile charges feel that force inwards and those they can make the turn.

So it's normal for a matrix charge to exert a force on a mobile charge, that's how current turns a corner, and it's how resistance affects current in a resistor too.

In short. The mobile charges feel electric forces and magnetic forces. They feel forces from the matrix charges, some are resistive forces based on the current, some are forces that keep the current flowing inside the wire (like the forces that help current turn a corner). The solid feels forces from the mobile charges, and from the electric and magnetic fields, but it is defined (strained) in a way to give stresses on itself to oppose those forces (since the loop is moving with a steady velocity). So imagine a deformed solid wire of protons with a fluid of moving charges inside it, with the deformation of the wire exerting a force on each different part that opposes the net force of everything else on that part of the wire. Except the wire also has many electrons in the solid matrix too, it has everything except the mobile charges.

Now we have a pretty accurate picture (except we are still ignoring radiation and such). Let's compare with Faraday's law, which relates the electric EMF to the current position of the loop and the amount of flux of $\frac{\partial \vec B}{\partial t}$ through the instantaneous position of the loop. And you can compute that the magnetic EMF for a thin wire, with the charges constrained to stay in the wire (and no magnetic monopoles) is equal to the different between the time change of magnetic flux and the flux of the time rate of magnetic flux.

Leave the magnetic field constant and change the loop and you get a magnetic EMF.

Leave the loop constant and change the magnetic field and you get an electric EMF.

Move a loop through a changing field and you get an EMF due to electric and magnetic forces.

Even though magnetic fields don't do work, since an EMF isn't about work. It's about the force exerted on the mobile charges in the direction of the wire, and hence about the current level needed to have the resistance force be large enough to overcome the EMF.

If you had an actual solenoid and you knew the current in the solenoid as a function of time, you could compute the electric and magnetic fields everywhere inside the solenoid. But if you want to be completely accurate you'd eventually be taking into account things like the time delay.

Not the answer you're looking for? Browse other questions tagged electromagnetic-radiation induction or ask your own question.

2
Why does the induced EMF oppose the change in magnetic flux? Lenz's Law question
4
Why is there no induced electric field in the experiment (Faraday's Law)
2
Induced emf problem
13
How does the emf “know” what the magnetic flux is?
0
The trouble with EMF induced in the coil of wire
3
Is electromagnetic induction a result of the Hall effect?
3
Can Kirchhoff's Voltage Law be applied here?
1
How to calculate induced emf of moving rod?