How sound waves are graphed

I asked a basic question about sounds waves recently and got really helpful answers. I have another question (from the same youtube video) about how different sound graphs are used in real world applications.

Watching this khanacademy video it explains there are two ways to graph sound waves: 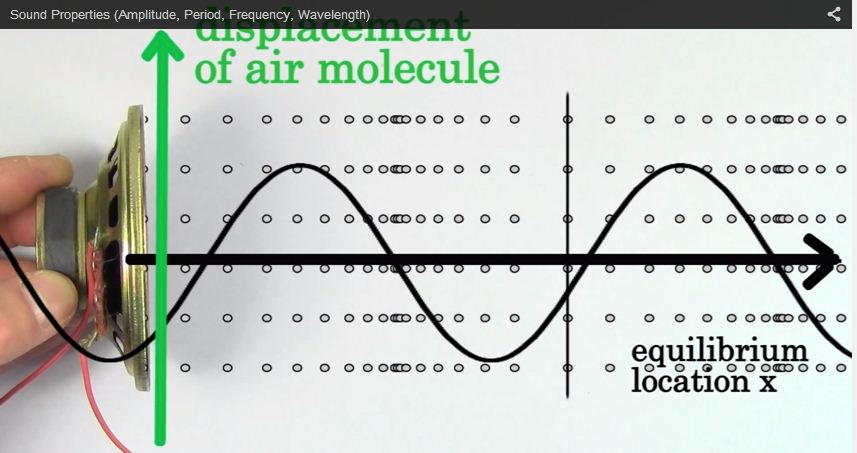 or a displacement vs time graph:

An ocilloscope is a displacement vs time graph rigth? What real world applications would I have for one type of graph over the other one?

A graph should clarify the relationship between two quantities, requiring the least amount of mental effort on the part of your audience.

If you are trying to show the change of density as a function of position along a wave, you should plot position along one axis, and density along the other. Whether you use vertical deflection as a measure of density or dots that are closer together or further apart is a choice you can make: if you want to give people an intuitive sense of "further apart", then the dots are a good choice; if you want to show "sinusoidally varying density profile", then the line graph would be better.

While an oscilloscope normally has a horizontal time axis, it is actually possible with most scopes to plot "anything you want" along the X axis, using something called the XY mode of the scope. Thus, you don't have to plot time (although we usually do).

If you want to explain how density at a point changes over time, then plotting time along the horizontal axis (rather than position) makes more sense.

There exist many, many different types of graphs; histograms, pie charts, scatter plots, line graphs, bubble plots, ... they each have a different way to represent the information. And there is never a "one size fits all" - ask yourself what information you want to convey (if you already know the data and understand it), or what questions you are asking of the data (in case you are not yet sure yourself what you are looking for).

It's OK to draw multiple different graphs, too. Engage the visual parts of your brain - you will be unlocking a whole new supercomputer!

41
How much information about the scale of a waterfall can be obtained from its sound?
14
What is light, and how can it travel in a vacuum forever in all directions at once without a medium?
7
Is the wobbly rope depiction of a radio wave inherently wrong? And how do vectors of parallel waves align with each other?
1
How are sound waves of different speeds heard differently?
2
Are all sound waves periodic waves?
1
How is the subjective loudness of sound computed?
2
How are sound waves produced?