Why is a photon its own anti-photon?

Two properties of a photon that I have considered in trying to answer this myself :

My question is, does the invariant helicity property, if true, contribute to the concept of a photon and an "anti-photon" being the same entity?

If not, why not, and are there any other properties unique to photons that I have not considered?

Does the invariant helicity property contribute to the the concept of a photon and an "anti-photon" being the same entity?

Not really, and I think you're getting mixed up between helicity and chirality here. Take a look at this deep-water wave image by Kraaieniest. See how the red-dot test particles move in a helical-like fashion? They can't move "the other way" because the wave is what it is, and your own motion doesn't change that. Like Youstay was saying, a photon is a wave, and there is no such thing as a negative wave or an anti-wave or an anti-photon.

Are there any other properties unique to photons that I have not considered?

What you haven't considered is Dirac's belt, wherein "a Mobius strip is reminiscent of spin-1/2 particles in quantum mechanics, since such particles must be rotated through two complete rotations in order to be restored to their original state". When you make your photon go round and round a twisted Mobius path rather than move linearly, then the motion of the wave can have one of two chiralities. See the Mobius strip article on Wikipedia: "the Möbius strip is a chiral object with right- or left-handedness". Also see the Wikipedia spinor article, and there's the Mobius strip again: 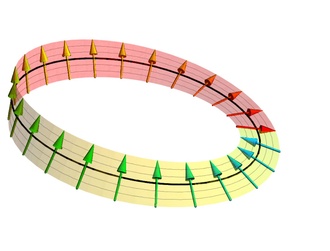 A photon should be discussed as a wave, instead of a particle (as it ceases to exist in rest state). As such two waves of the same wavelength and frequency may or may not be "negative" to each other, depending on their phase difference. When their phase difference is an odd multiple of pi, they will invariably cancel out each other upon interference.

3
Redshifted photons
8
How to evaluate possible values of spin of a two photon system?
1
Electron Positron anhillation: helicity combinations and spin of photon
0
Photon-photon scattering threshold
2
Can a single photon have circular polarization?