The region beyond the ring singularity in the maximal Kerr spacetime is described as having closed timeline curves. Why and/or how is the question. 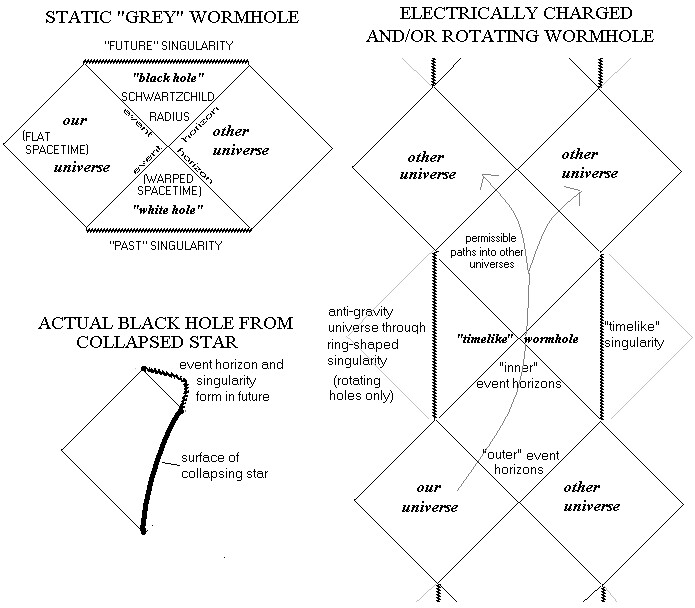 Now if you look a Kruskal-Szkeres Diagram (or a Penrose Diagram as above) you can see that the Kerr singularity (right) is timelike but the Schwarzschild singularity is spacelike.

Inside the Schwarzschild event horizon curves with constant longitude, latitude, and areal radius are actually spacelike so areal radius is actually a time direction. So you could claim that since r is the timelike direction there are curves that start and stop at the same t (since t is a spacelike direction) but I've never seen anyone claim there are CTC inside the event horizon of a Schwarzschild solution.

And even if we interpreted it like that, the region in Kerr where r (not areal r in Kerr, but the usual r for Kerr) is timelike is the region between the two horizons. And the lines making an X to the right of our universe are the outer horizon (see Penrose diagram) whereas the lines making an X to the left of the right most singularity is the inner horizon so the region between where r is timelike isn't connected to the singularity except in its infinite past (where we won't go).

So I'd like to know why and/or how there are closed timelike curves in the negative r region of the Kerr solution. And if someone knows why people cite Hawking and Ellis for that fact that would be interesting too.

As already noted by John Rennie, Penrose diagrams are not suited for the analysis of Kerr CTCs because they show a $\phi = const., \theta=\pi/2$ slice of the global structure. The $r<0$ region is however accessible only through $\theta \neq \pi/2$. The Boyer-Lindquist coordinates actually misrepresent the central singularity but you can see the singularity "unwrapped" locally by understanding Boyer-Lindquist as oblate spheroidal coordinates.

The $r<0$ region can be essentially covered by the $r>0$ Kerr metric with $M \to -M$. Here you find cases where the $g_{tt}>0$ and you can thus choose a time-like four-velocity to point in the negative time direction with respect to $r \to \infty$. It is obvious that curves that spend some time in this region and then go "outside" towards $r \to \infty$ can be CTCs.

The Gödel solution is so often cited in this context because it is the historically first solution in which this rather unsatisfactory possibility of relativity was shown and discussed.

I"m pretty sure that this discussion does appear in Hawking and Ellis, though I admit that it's been a while since I looked. It's not done through a Penrose diagram, though.

The argument really comes down to the fact that for sufficiently small $r$, $d\phi$ is timelike. But, by construction, the orbits of $\phi$ are closed curves. When $d\phi$ is spacelike outside the horizon, this just generates the axisymmetry of the Kerr solution. But, for these small values of $r$, it becomes timelike, and therefore, these orbits represent closed timelike curves. You avoid intersection with the horizon so long as your value of $\theta$ doesn't put you on the same plane as the ring singularity, so these curves are not incomplete geodesics or anything like that.

You can't see this on any of those penrose diagrams, because they all suppress $\theta$ and $\phi$

Timaeus : I can't answer your question, but would like to comment. However what I want to say is to big for a comment, so I'm using the answer facility. Apologies in advance, feel free to downvote.

The region beyond the ring singularity in the maximal Kerr spacetime is described as having closed timelike curves.

Let's imagine we're out in space, at a safe distance from a non-spinning black hole. What's the speed of light at the event horizon? Zero. From where we're standing the the "coordinate" speed of light is zero. (See John Rennie saying that here). Now let's say our black hole spins at half the speed of light. But half of zero is zero. So it isn't spinning. Or it's spinning infinitely faster than light. Something's not right. Something's not right with the closed timelike curve too. See this page of Palle Yourgrau's book A World Without Time: The Forgotten Legacy of Gödel and Einstein:

"Wheeler, unfortunately has conflated a temporal circle with a cycle, precisely missing the force of Gödel's conclusion that the possibility of closed, future-directed, timelike curves, ie time travel, proves that space-time is a space, not a time in the intuitive sense. Whereas a circle is a figure in space, a cycle is a journey undertaken along a circular path, one that can repeated, in Wheeler's words, "over and over again". Exactly how many times, one wants to ask Wheeler, is the journey supposed to be repeated? The question clearly cannot be answered, since the time traveller's journey is not over time, along the closed timelike curve: it is the curve itself".

The moot point is that you don't travel along a worldline. You travel through space over time. The worldline is a static representation of this. So a CTC doesn't represent time "travel". So what does it represent? Groundhog Day? No. If your CTC worldline is 24 hours long it's more like Mayfly Day. Your life is 24 hours long and it's causeless, you hatch from your own egg or something. Much as I love all those science fiction movies, I'm afraid time travel is a fantasy.

Let's move on to the Penrose diagrams, wherein "space is uni-directional within the horizon, just as time is uni-directional outside the horizon)". Whoa, hang on a minute. Einstein said a gravitational field is a place where "the speed of light is spatially variable". And if the speed of light is zero at the event horizon, how can it go slower than that? And since nothing can go faster than light, how can an object ever pass the horizon? And how can we say it will inevitably hit the singularity if this only occurs at future infinity? And where has this unidirectional space come from? A gravitational field is not a place where space is moving inwards, we do not live in some Chicken-Little world. A gravitational field is a place where space is "neither homogeneous nor isotropic". So what's all this about connecting two separate universes? Where does all this Schwarzschild wormhole stuff come from, wherein "particles from the interior white hole region can escape into either universe"? From Einstein's 1935 paper with Rosen? No way. Einstein refers to a singularity at r=2M, at the event horizon. That's where the gravitational field ends, because light can't go slower than stopped. That's the boundary of the space. And this paper is The Particle Problem in General Relativity. It's about particles like the electron, and how they can't be point-particle singularites. It isn't about wormholes to another universe. How did we get to an anti-gravity universe, and to three other universes? Methinks what we have here contradicts Einstein whilst appealing to his authority, and that it isn't just time travel that's a fantasy.

Not the answer you're looking for? Browse other questions tagged general-relativity spacetime event-horizon time-travel kerr-metric or ask your own question.

3
The vacuum light speed: Is it really constant, i.e., independent of location in space-time?
5
Closed timelike curves in the Kerr metric