Why the electric potential energy the charges carry in a electric circuit does not vary with its distance to the opposite terminal?

I understand that with wires assumed to be ideal, there is no resistance and subsequently no force acting on electrons, hence no work done and p.d. across any segment of wire.

You should look at an electric circuit a like a river or a water slide attraction in an amusement park (see my little artist impression below). The resistors are the steep parts: that's where the potential energy is lost. The wires are the horizontal parts, so there no potential energy is lost. But as the water is already moving, it doesn't stop moving in the horizontal parts. 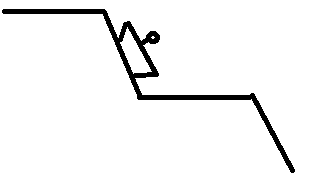 Of course in reality the resistance of the wiring is not zero but 'very small compared to the rest in the circuit' so in the analogy, the horizontal parts aren't horizontal but just a little bit down hill.

Technically you are correct and there is a voltage drop with distance but since the voltage drop is current * resistance and your resistance on a PCB track is usually measured in the milliohms it's ignorable unless your doing something really hairy with LOTS of current or ultra sensative.

The other answers are not really hitting the core of the problem and that is - on top of conductors, regardless if there is a current or not (open circuit condition for example), there exist surface charges which get created due to fact that there is an electric field present in the source. The consequence of that electric field is that a surface charge density gets established on surface of the conductors. Why on the surface? Because that's the only place where they can get in a stable equilibrium. The end result - assuming no current flows (open circuit) is that there shouldn't be an electric field anywhere inside the conductor. A small amount of positive charge (from the battery) will enter the wire that is connected to the positive terminal of the battery and it will redistribute itself along the surface of the wire connected to the positive terminal of the battery so that the field produced by the surface charge density cancels any field that would be felt from the source inside the conductors. Same thing will happen on the negative wire (the wire connected to the negative terminal of the battery) but in that case, negative charge will leak.

The end result will be something similar to this: 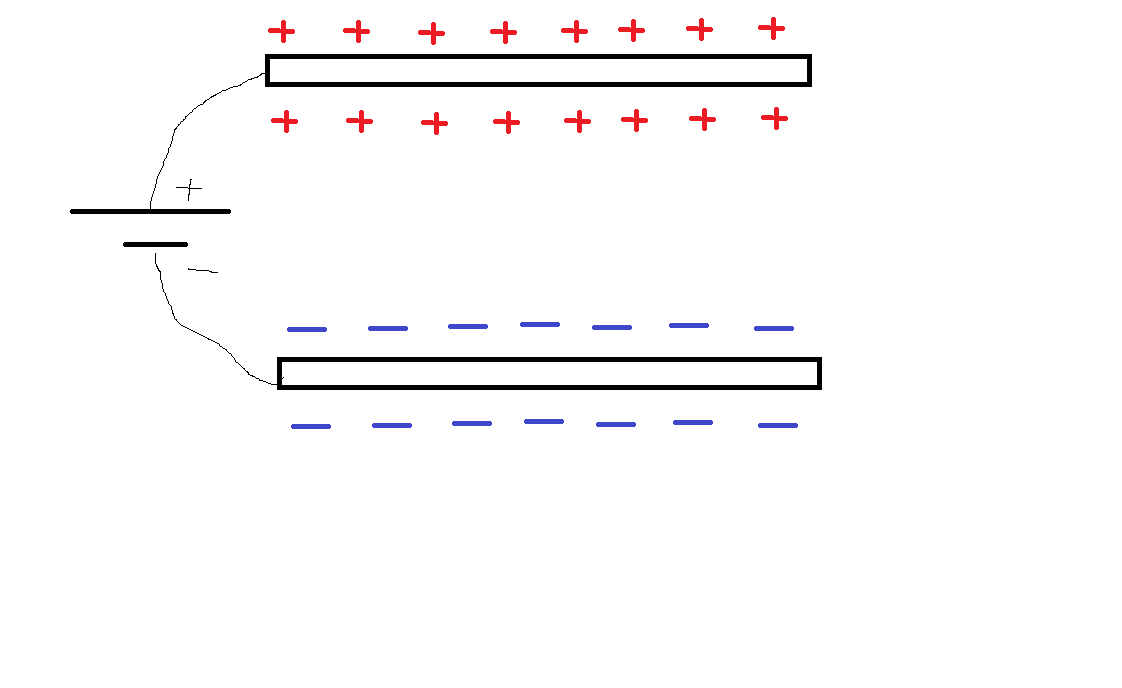 If you were to measure the potential along the wire, you would see that it is now constant. Your original assumption that potential should drop because of increasing distance - is correct. In fact, potential created by the battery in air drops rapidly as you move away from the battery (if I were to guess, I'd say that it drops with square of the distance, just like a dipole). However, because the charge is free to move from the battery to the conductor, any potential drop will get exactly counteracted by the creation of surface charges.

So, what happens when current flows and resistance kicks in? There will be a component of electric field that will also be tangential to the conductor. And that is the component that will be responsible for the small measurable voltage drop beacuse of resistance. But the surface charges will pretty much remain similar to the open circuit condition and it will be their job to ensure that the bulk of potential of the conductors stays the same.

Not the answer you're looking for? Browse other questions tagged energy electricity electric-circuits potential or ask your own question.

2
Electric Potential drop in wires
0
Why do charges not lose potential as they travel through the circuit before reaching a resistor?

1
What makes charges flowing in a circuit with a higher potential difference perform more work?
1
Why doesn't the electric potential constantly decrease in a circuit as the current moves from the positive to the negative terminal?
0
If the electric potential is location dependent, why do charges loose it when passed through a heavy resistor in a circuit?
3
Why is there only a drop in potential energy when charges flow through a resistor?
1
Electric potential in a wire
1
How does distance effect the flow of charges between a capacitor's plate and battery
3
Why don't we consider the electrical potential being converted into kinetic energy when working with circuits?
3
Why don't electrons still have energy after completing a circuit with a battery?
0
Relationship between Electric Fields, Potential Difference and Resistance in Circuits
1
Why does electric potential does not change along a wire(superconducting) but change across a resistance?