Is there a scientific term for the right-hand-(grip-)rule?

To illustrate and remember the direction of rotation around an axis defined by a vector as it happens to be in some fields of physics, one can employ the right-hand-rule: 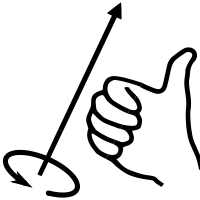 Is there a scientific term for this relationship?

Say rotation for example can be described as clockwise or counterclockwise, but there's also the terminology of mathematically negative or positive. Is there a short alternative to saying "a rotation and vector defined according to the right-hand-rule"? I guess I could start a description including the plane and the normal vector...but this is really long for something so simple.

I do not want to use an analogy to a physics problem that follows this rule either, because that would complicate the matter even further.

Or is using the term "right-hand-rule" a valid thing in scientific language?

Well, if you're wondering if people won't know what it is, or if you should be calling it something fancier: no. This and closely related notions are common language among physicists, much like "mass" and "force" are common language. A "right-handed triple" is a collection of three vectors in a particular order such that they obey the right-hand rule. A "right-handed rotation" is just what's shown in your picture. So yes, in 3-d, feel free to just throw around the term "right-handed", and expect everyone to understand it and be happy with it. It's a perfectly cromulent phrase.

But that's just in standard Euclidean 3-space. The right-hand rule is an interesting special case, because you use two vectors, and their cross product gives you the correct direction in the only other possible dimension. But there's no cross product in four dimensions. It's true that you can define a cross product in 7 dimensions (see this paper for an awesome explanation of why 3 and 7 are the only dimensions in which this is possible). But in 7 dimensions, your right hand would have to have 7 fingers, and you'd have to have some standard way of pointing each of them, in order. And none of that would work in any other number of dimensions, because there's no such thing as a cross product. Basically, I think the cross product is a silly, redundant way to think about these things.

There is, however a generalization that works in any vector space with any number of dimensions. The mathematical term for this notion is "orientation". Basically, it just comes down to a choice of ordering for the vectors in whatever basis you choose for your vector space -- you just have to choose something arbitrarily and stick with it. The best system for this is geometric algebra, which generalizes all our useful notions of vector algebra to arbitrary dimensions, including the cross product (though with somewhat different properties).

There's also the closely related notion of orientability of a surface -- or more generally a manifold. An orientation of a manifold is basically a consistent choice of the orientation at every point. But there are manifolds where it's not possible to make such a choice! The classic example of a non-orientable surface is the Möbius strip. [There are similarly non-orientable manifolds of higher dimensions, including three dimensions, but they're a lot harder to visualize.] In a non-orientable space, you and a friend could come up with some idea of an orientation like the right-hand rule at one place. Then you could go for a walk, keeping that orientation fixed (e.g., keeping your right hand splayed out appropriately), and come back to find that you and your friend no longer agree on the orientation.

Not the answer you're looking for? Browse other questions tagged terminology conventions or ask your own question.