Is it possible to remove the last block from a the lowest layer of a Jenga tower?

A while back, my brother and I had a discussion about the possibility of removing the last block from the lowest layer of a Jenga tower with the layer immediately above it having only one block in it as well (see illustration below). His theory was that if you were fast enough, you could pull it out like a magician pulls a table cloth out from under a table full of china.

I protested against that idea by arguing that the tower is so unstable that in order for the block (made out of maple) to be pulled out fast enough, it would end up being damaged.

I know enough about physics to know that it would be possible to calculate the minimum speed at which something would have to be moving to smack the block hard enough to knock it out from under the tower without knocking the tower over, and I know that if that speed is known, calculating whether the block would get damaged would be relatively simple. However, I don't know enough about physics to actually be able to know how to do the calculation.

Is there anyone here that would be able to give an explanation of how that speed could be calculated?

The dimensions of the standard Jenga block are listed here as 1.5 × 2.5 × 7.5 cm, and they are made of maple (I believe it's hard maple, if you want to be precise). Additionally, as the image above shows, I am assuming the shortest tower possible. That is, 17 layers of three blocks each on top of two layers composed of one block each with the extra block resting on top.

Let's take this in steps.

This tells me there are two things to consider:

Now I know what equations I have to set up.

First, let's look at the "move slowly, no friction" case. If the tower has height $H$, width $w$ and uniform mass distribution, then it will fall increasingly quickly when we support it off center. I wrote an answer about balancing a pencil a while ago that includes the calculation of the equation of motion of the inverted pendulum. This is complicated by the assumption that the support moves - so let's simplify. If we supported the tower "on the edge" how long would it take to tip over?

In part this depends on the height of the bottom block: for a very thin block, the tower would tilt, then come to rest at a slight angle. For a bigger block, it will tilt until the corner hits the ground, and do so with sufficient speed to continue toppling over. The following diagram shows what we're thinking about: 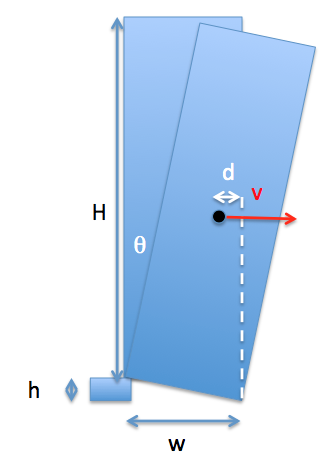 There is going to be a certain height of block $h$ below which the tower will not topple. Let's start finding that limit...

For mass $m$ initially displaced $w/2$, the total torque is given by

if we assume $w$ and $h$ are both much less than $H$, we can rewrite this by expansion:

Note that this analysis was done with the assumption that the block is moved all the way to the edge of the tower: while that would cause the tower to initially start tilting most rapidly, it does restrict the angle it reaches when the corner comes to rest. If we take the other extreme where the block is moved "just off center", then the initial angle of tilt when the corner first hits the ground is $\theta = \tan^{-1}\frac{w}{2H}$. Obviously, if that angle is greater than the internal angle $\alpha$, the tower will continue to fall - but assuming it is not, then the same analysis as above applies. This puts a second limit on $h$:

As you can see, this is in fact a less severe limitation - the chance that the tower will keep moving when it lands sets a tighter limit on how large the block can be.

Now I think we can use this "limiting block height" as a way to estimate the time we get to move a larger block out of the way: if the block is removed before the corner hits the ground, the tower will keep moving at the same rate of rotation as before, while at the same time dropping to the ground. The equations now start to get really messy - especially if we add friction. I think it's time to go to a numerical solution...

The following Python code sample is a very approximate way to approach this. For the particular parameters I chose, you need the block to be pulled out with a velocity of at least 0.36 m/s - not particularly fast. Of course I make all kinds of assumptions here, and I suspect that the physics I modeled was quite sloppy. But you might use this as a starting point for a proper simulation. Draw diagrams, set the equations of motion up properly (as functions instead of inline), and use a better integration scheme (leapfrog, Runge-Kutta) than I used. I am sure that there is at least one error in the calculation - I am not properly accounting for lateral motion of the center of gravity during the pull (force of friction should move entire tower sideways). This will change the solution for very slow velocities - the tower should just move with the bottom block!

So - plenty to do, but I can't spend more time on this now. Thought you might appreciate this nudge in the direction of a solution - but please don't treat this as "correct final answer".

Plotting the height of the corner and the angle of the tower as a function of time, you get different regimes. If you move very slowly, the tower falls over completely (blue line = angle; green line = height of corner above ground): 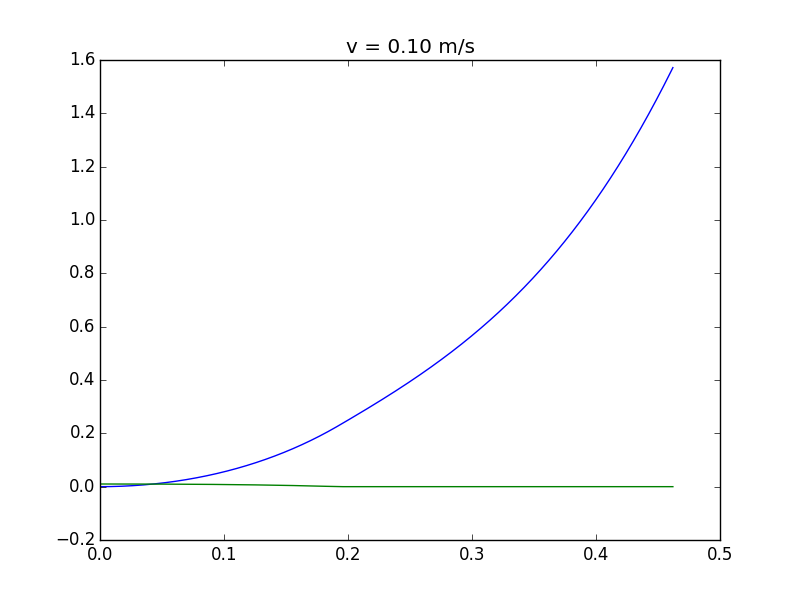 If you pull very quickly (above 0.37 m/s in this instance - but that depends a lot on the chosen parameters) it will tip a little, then recover (simulation stops when the tower starts turning in the other direction - i.e. when it turned out to be stable): 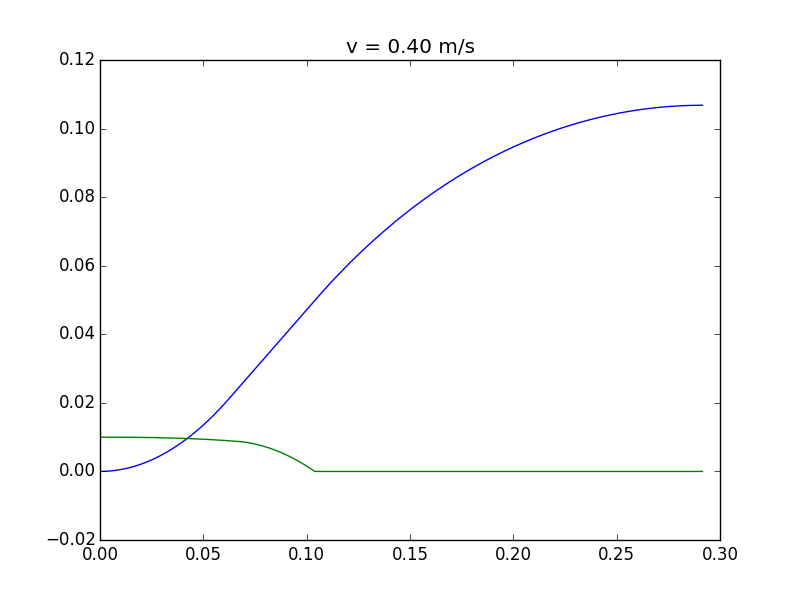 Finally, in this simulation the tower just goes unstable at 0.36 m/s pull speed: you can see that it teeters, then falls (note the longer time scale): 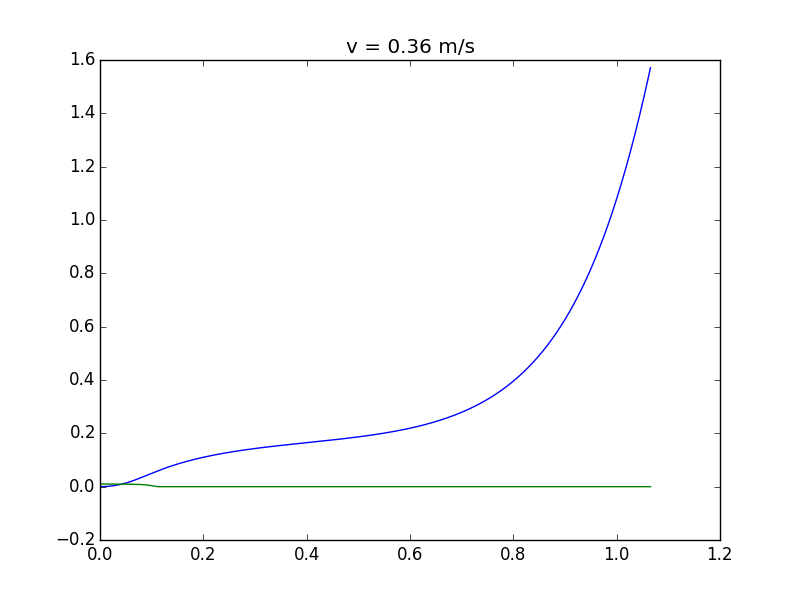 Not the answer you're looking for? Browse other questions tagged homework-and-exercises newtonian-mechanics everyday-life home-experiment estimation or ask your own question.